The Grand Old Party was on a downward trajectory long before trump Inc. commandeered the controls and turned it into a cult of Kleptocrats, climate deniers, spendthrifts, fiscally responsible cynics, evangelical back-sliders, sexual predators, and morally reprehensible apologists. Compassionate Conservatism, although never a plausible Republi-con policy, is now a form of pure political derision by what’s left of your grandfathers GOP. 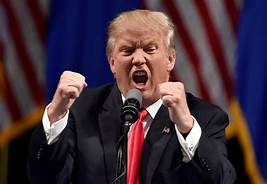 America is tragically being governed by it’s crazy uncle; that loon who shows up at family events and ruins everyone’s party. He’s inconsolable, unapproachable, uncompromising, unhinged and unapologetic when he spews out bigoted or nonsensical dribble. He lies with abandon and nominated a kindred coagulated mini me in brett kavanaugh.

America endures the most shameful era in it’s highly respected and emulated Democratic history. Decadence is too mild a word.

There’s no adjective too strong to describe what trump and his enablers in Congress represent – Despicable 3 Are We!

Like a crack addict who will do absolutely anything for his next fix; trump’s fix of course is “winning” the moment. Pushing any crazy conspiracy, telling any lie, belittling or degrading any person, even victims of sexual abuse, just to achieve any edge, or gain, no matter how insignificant, inconsequential; no matter how disruptive or destructive to our Republic.

trump and his entire administration spends most waking hours, and even unconscious dreams, scheming ways to make themselves richer and more powerful; and trump has used the presidency to heal his failing business ventures and cash in before the justice department shows up at 1600 Pennsylvania Avenue with an arrest warrant or articles of impeachment.

I have to save room to criticize the Republi-cons in congress and trumps unwavering lemmings. I find myself frequently checking thesaurus, looking for words strong enough to adequately describe what they allow as just normal trump behavior.

The Republi-con party and along with them, their depraved Evangelicals, will be forever  tainted as the party of Nationalists, racists, abusers, moral degenerates and grifters.

trump brags about violating our constitution, breaking the law and ignoring centuries of U.S. precedent by turning desperate asylum seekers away from our borders. He conducts U.S. foreign policy so as to enrich himself, his family, his billionaire friends and his political donors. He attempts to use the justice department to protect him and his cronies and punish his enemies. He nominated kavanaugh solely for the purpose of ensuring his corrupt usurpation of our Democratic institutions will continue unchecked.

Progressive, critical thinking Americans must brush aside the nonsensical flotsam and jetsam ebbing daily from trump’s white house and keep their eye on the damage undermining our constitution, our institutions and our environment.

trump attempts to scare the bejesus out of his faithful and proclaims “only I can fix it,” instead of working together democratically; the M.O for despotism 101.

If kavanaugh is confirmed before a full and fair investigation by the FBI or some other legitimate fact finding body, the political whitewash will further divide the county; and the GOP will forever be labeled as the Grab Our Pussy Party. Sadly, I think most trump supporters couldn’t care less.

Will the few semi-moderate republi-cons in the Senate finally decide they’ve had enough and put America and kavanaugh’s family out of their misery and vote against his confirmation. Not likely; but hope springs eternal.

I would like to pose a few questions for the republi-con Senators who adamantly refused to be swayed. If your daughters or grand-daughters, maybe like kavanaugh’s two daughters, Elizabeth age 10 and Margaret age 13, were victims of a bunch of privileged, marauding, mean drunks who believe they’re entitled to get naive young women drugged or drunk and stand in line for their turn at ‘boys will be boys’ rights of passage, would they demand justice for their children? Would they still want justice 35 years later if their loved ones suffered in silence but finally found the courage to come forward so someone else could be spared a similar fate? Would you want a full and fair investigation or is it more important to toe the party line?

North Dakota Senator Heidi Heitkamp, locked in a tight reelection campaign, displayed extreme courage today by announcing she will not vote to confirm kavanaugh, saying:  “In my judgment, Judge Kavanaugh is not someone we want on the Supreme Court.”

Senators Manchin, Flake, Murkowski and Collins should do the right thing and stand with Sen. Heitkamp.

Senators Heitkamp and Murkowski both voted against kavanaugh. The rest will have to live with their decision to confirm a right-wing zealot, climate denier and serial abuser for the United States Supreme Court. The truth usually exposes itself eventually. Hopefully, justice will be done.