From spectacular vistas to the pits: A decades-long public land battle continues in the California desert

The Eagle Mountain iron mine closed more than 30 years ago, and it still haunts the park that borders it on three sides.

Just beyond the southeast corner of Joshua Tree National Park, rows of boarded-up houses, gouged mountainsides and concrete ruins are an ugly reminder of the never-ending battle over the West’s public lands.

This scarred piece of California desert is what’s left of one of the country’s largest open-pit mining operations and the little company town that Kaiser Steel Corp. built after World War II. More than three decades after the Eagle Mountain iron mine closed, it still haunts the park that borders it on three sides.

Plans to turn the site into a huge landfill and dump as much as 20,000 tons a day of Southland garbage into the gaping mine pits died in 2013 after years of court battles. Now, a private company wants to use the pits for a $2-billion hydropower project.

The Eagle Mountain tract, shaped like a handgun aimed at the park’s interior, offers a lesson in what can happen when federal monument protections are stripped from public lands — as President Trump’s administration is considering doing at a number of national monuments in the West.

“It’s been a sordid history,” said Mark Butler, a former Joshua Tree superintendent who is retired from the National Park Service.

It’s been a sordid history. 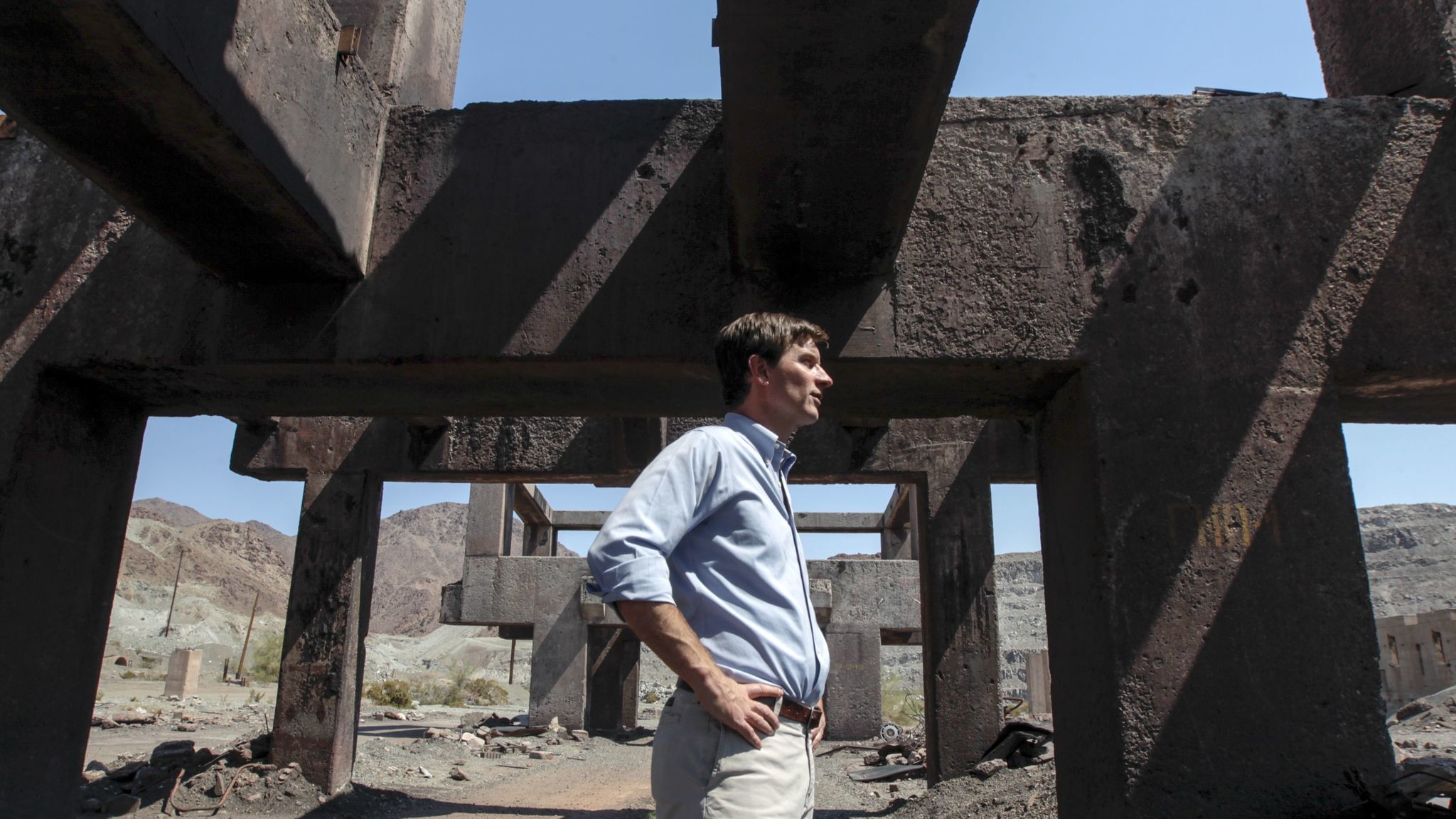 But the monument’s ban on new mining claims infuriated gold and silver prospectors who’d long mined the area. In the 1940s, Kaiser Steel bought old patented claims to iron deposits in the Eagle Mountains and started digging them up.

In 1950, Congress shrank the monument by more than a third, chopping a chunk off the northern boundary and the Eagle Mountain area. The way was cleared for Kaiser to blast millions of tons of iron ore out of the mountainsides over the next three decades and ship it by rail to the roaring blast furnaces of the company’s Fontana steel plant.

The 1994 California Desert Protection Act that upgraded Joshua Tree to a national park added much of the Eagle Mountains to the park. But the law omitted the abandoned mine and surrounding federal land.

The reservoirs would be part of what Steve Lowe calls “an elegant solution” to a problem California is confronting.

On a recent day, the town remnants baked in 120-degree heat beneath a mountain of mine tailings. The hulking ruins of the ore loading area looked like a bombed-out village in Afghanistan. Rock benches traced the excavation of four huge pits.

Jeff Harvey and Steve Lowe of Eagle Crest Energy Co. climbed to the top of a metal tower that Kaiser foremen had used to direct mine traffic.

The 360-degree view swept from park peaks to the north, over the moonscape of the mine to the haze-veiled Chuckwalla Valley in the distance. 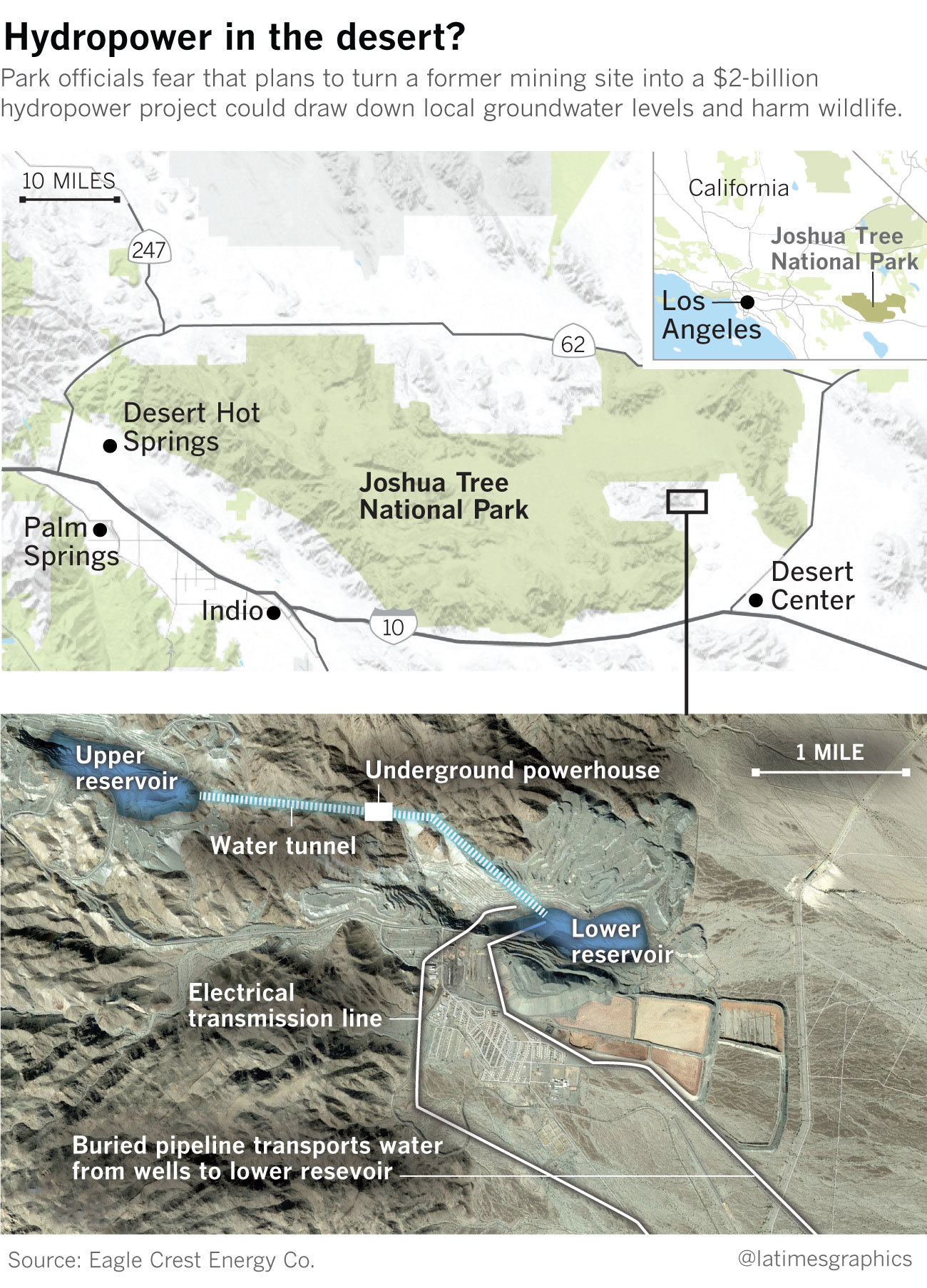 “This would be full of water,” said Harvey, looking at one of two pits that Eagle Crest wants to convert to reservoirs.

Separated by about 1,400 feet of elevation, the reservoirs would be part of what Lowe calls “an elegant solution” to a problem California is confronting as it boosts renewable energy production.

The sun doesn’t shine and the wind doesn’t blow according to peak electricity demand. Utilities need some way of storing wind and solar power — or shifting the production time.

One way is with battery systems. Another is through pumped water — the method that Eagle Crest proposes to use in an area that averages less than 4 inches of rain a year.

When the solar panels and wind turbines that are sprouting from the desert floor churn out more power than the electrical grid needs, Eagle Crest would use some of that excess to pump water through an underground tunnel system to the 191-acre upper reservoir.

Later in the day, when energy demand climbs, the water would be released back into the tunnel system, powering turbines and generating electricity at it flowed downhill to the 163-acre lower reservoir.

Pumped storage is not new. There are seven of the operations scattered around California at reservoirs and lakes. Eagle Mountain would be the biggest in the state, capable of producing 1,300 megawatts of electricity — enough to supply nearly 1 million homes.

Like all pumped hydropower systems, it would actually consume more energy pushing water uphill than it generates with the downhill flow.

Unlike the other California operations, Eagle Crest would use groundwater — piped from three new wells drilled on private land in the Chuckwalla Valley to the south.

Over the project’s four-decade life, the company says, it would withdraw a total of about 100,000 acre-feet from the Chuckwalla aquifer. That is enough to supply 200,000 homes for a year.

It is also enough to worry park officials.

They don’t think groundwater feeds their springs. But the Pinto Basin aquifer on Joshua Tree’s east side supplies the Chuckwalla with underflow. Draw down the Chuckwalla, they fear, and groundwater levels in the park could drop.

“The aquifers that underlie the park are ancient,” Joshua Tree Superintendent David Smith said. “Once you start depleting those reservoirs, no one knows what’s actually going to happen. How will that affect the park.… I don’t want to take that risk.”

He cited a 2012 research paper by federal scientists who concluded that groundwater recharge rates in the Chuckwalla Basin may be much lower than previously estimated, suggesting the aquifer is already in overdraft. 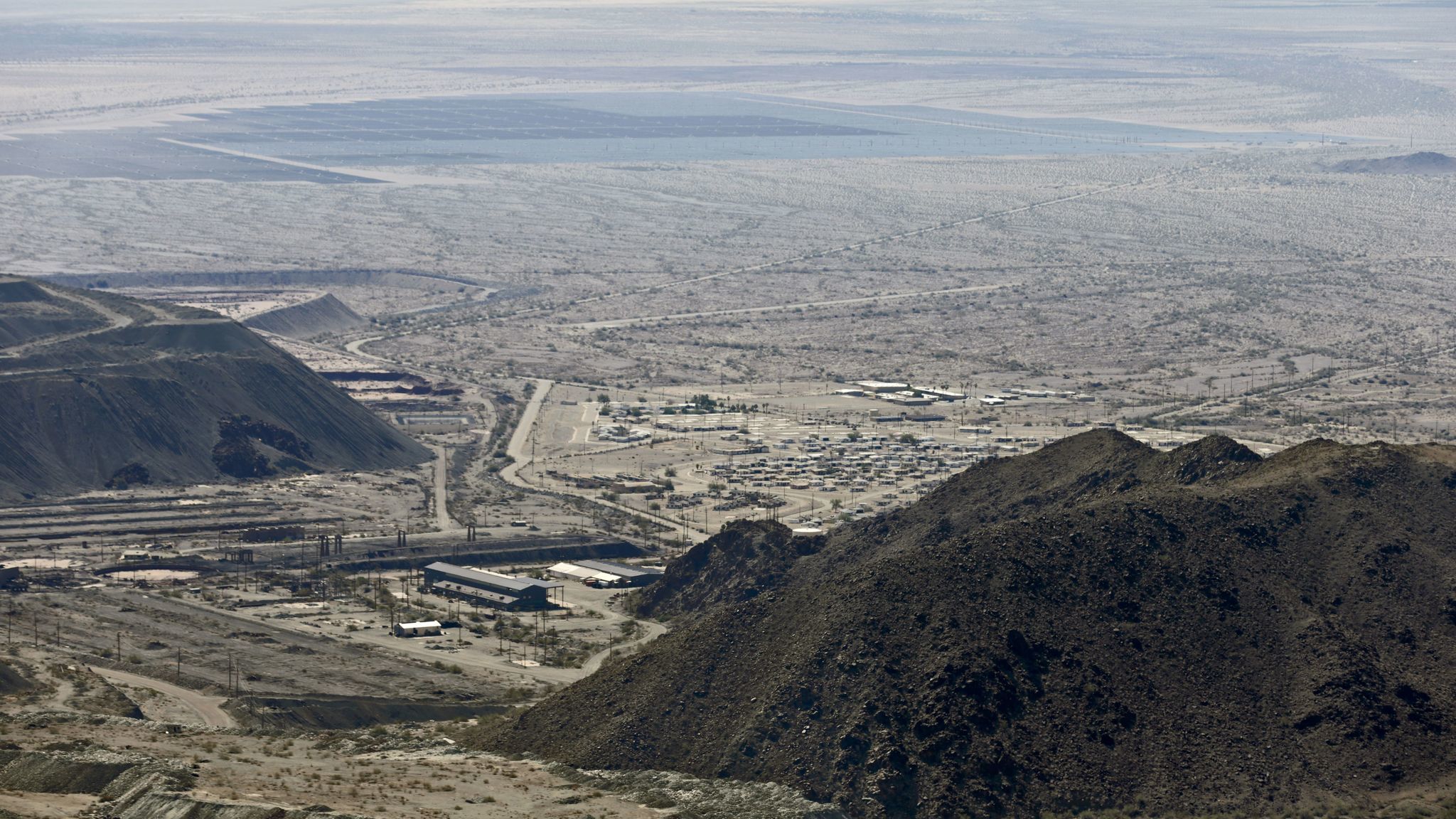 A view of the lower portion of the Eagle Mountain mine site and abandoned company town. A large solar farm is in the distance. (Irfan Khan / Los Angeles Times)

Eagle Crest, which bought the 10,000-acre Eagle Mountain site two years ago for $25 million, disputes the paper. Even if it is accurate, Harvey says, company wells would deplete the Chuckwalla aquifer by less than 1%.

Groundwater isn’t the park’s only worry. The hydropower project would disturb an area that has been largely quiet for decades, allowing bighorn sheep and other wildlife to return.

Butler warns that plopping two artificial lakes on such arid land would attract ravens and other predators that could prey on threatened desert tortoises and other park wildlife.

“You’re going to be essentially changing the ecology of that region,” said Butler, who was Joshua Tree’s superintendent from 2011 to 2014.

In April, the U.S. Bureau of Land Management announced it was preparing to approve a right of way on federal land outside of the park for 12 miles of Eagle Crest transmission lines and a 15-mile, buried water pipeline from the wells.

Both agencies essentially concluded that the hydropower project would not cause significant environmental harm and would not deplete the aquifer over the long term.

“It’s a FERC-licensed project, so it is pretty much the law of the land right now,” Smith said with an air of resignation.

He grew up in San Diego County, the son of desert rats who headed for Joshua Tree and Anza-Borrego Desert State Park on the weekends. He learned how to climb on Joshua Tree’s boulders. He got his first permanent park service job there.

“I love Joshua Tree. It’s part of who I am as a person,” said Smith, who succeeded Butler as superintendent.

He manages a park that is surging in popularity — Smith expects 3 million visitors this year — and is beset by outside pressures.

Development is on its doorstep. The nitrogen in Southland smog fertilizes invasive grasses that spread across the park, carrying ecologically destructive wildfires with them. Global warming threatens the park’s signature Joshua trees.

“Once you start depleting those reservoirs, no one knows what’s actually going to happen…. I don’t want to take that risk.” 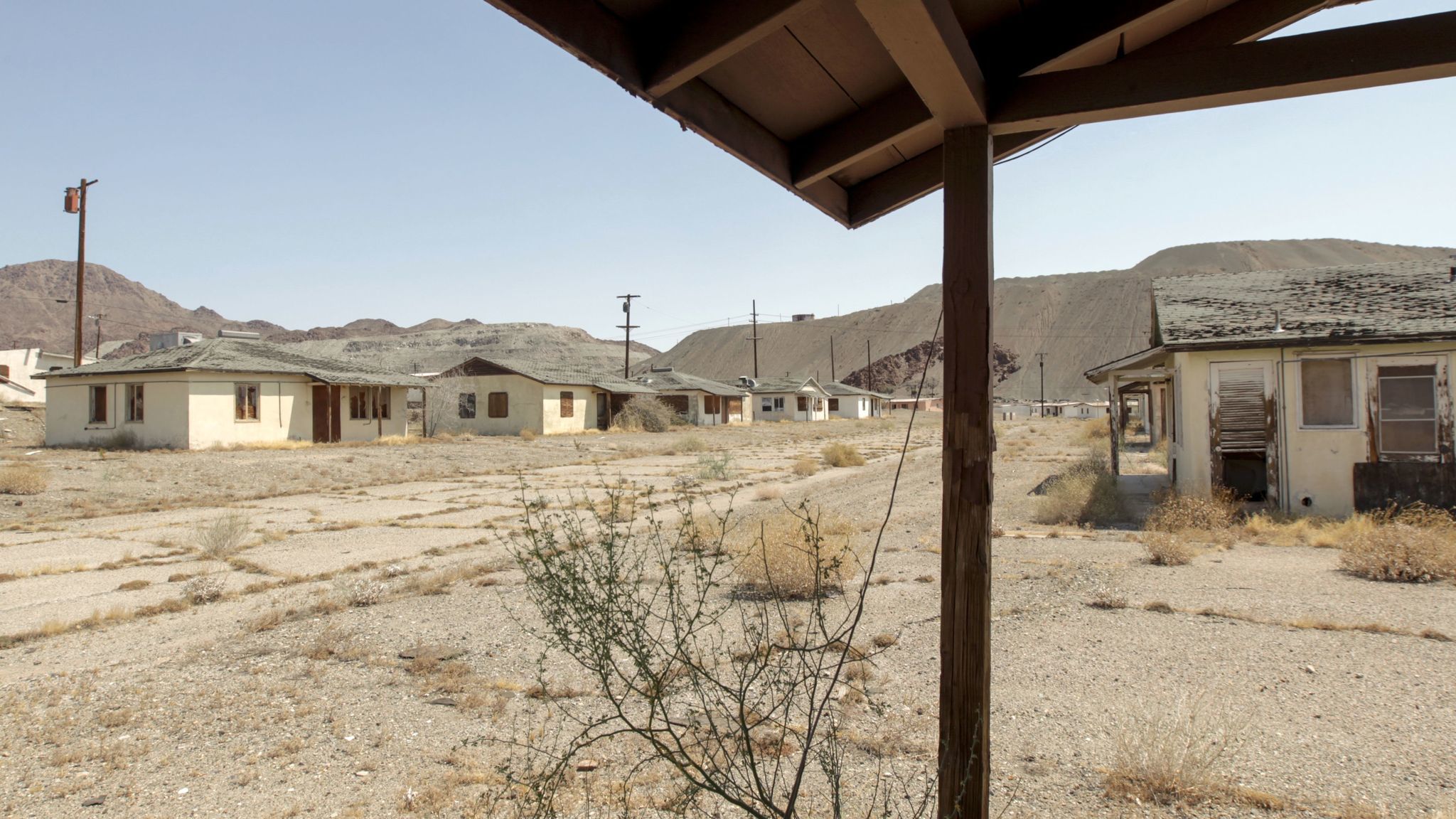 Weed-filled streets and boarded-up houses are all that is left of the company town. (Irfan Khan / Los Angeles Times)

Yes, he acknowledges, the Eagle Crest project could help reduce the greenhouse gas emissions that fuel climate change. “My concern is that the solution does not cause problems in the park,” he said.

Lowe, Eagle Crest’s president, ticks off the ways in which the abandoned mine is “a great site” for his project.

It is close to existing electrical transmission corridors and solar farms — a new one glints just down Kaiser Road. And, he says, it’s “repurposing a brownfield site that is never going to wind up the way it was.”

Lowe and his late father, Art, founded the company in 1991 and started pursuing the hydropower project despite the competing landfill proposal.

Initially, they eyed the wind turbines popping up in the desert. Now, with the growth of solar and California’s push for renewable energy, Lowe figures his time has come.

“The grid needs this,” said Lowe, who runs the company out of Santa Monica.

Two years ago Eagle Crest signed up a development partner, NextEra Energy, a large energy producer with several solar farms in the California desert, including Desert Sunlight, the 4,000-acre operation down the road.

But Lowe has yet to line up utility customers for the hydropower. And conservation groups have filed protests of the pending right-of-way approval in a move that foreshadows another court fight.

The long battle over Eagle Mountain, it seems, is not yet over.

“Since those boundaries were changed, there’s been almost 70 years of fighting over this landscape,” said David Lamfrom, California desert director for one of the groups, the National Parks Conservation Assn.

“So when people are thinking about the real implications of rolling back national monuments — they are severe.”

“I’ve spent a decade of my career trying to correct past wrongs as they relate to Joshua Tree National Park,” he added.