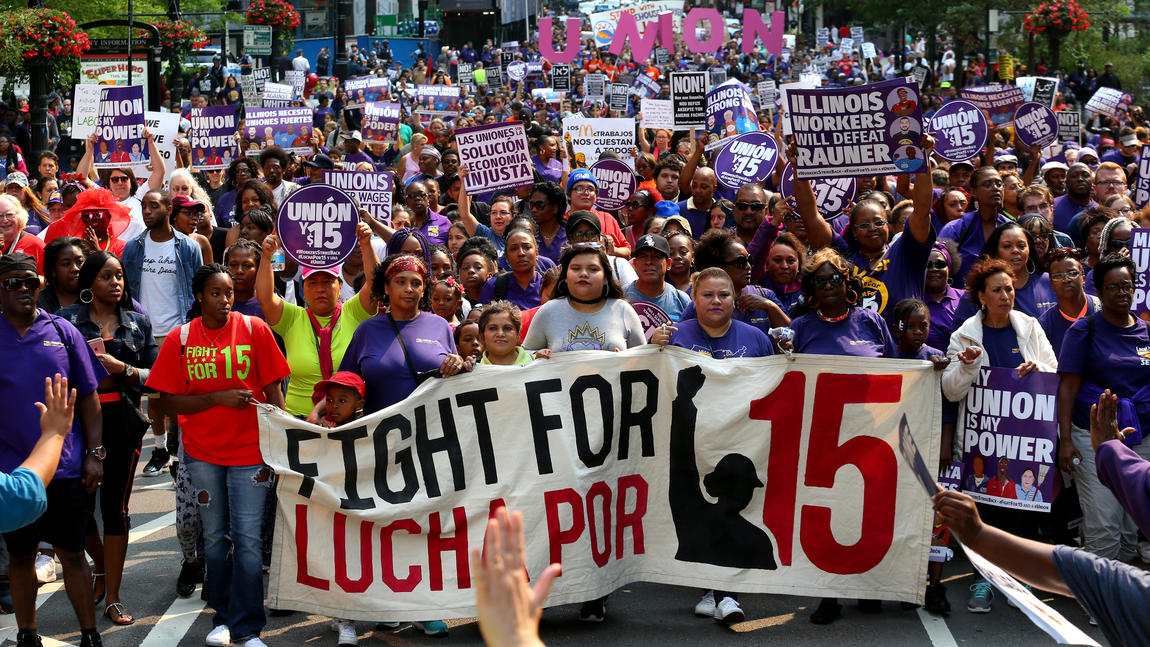 The average hourly wage paid to a key group of American workers has fallen from last year when accounting for inflation, as an economy that appears strong by several measures continues to fail to create bigger paychecks, the federal government said Tuesday.

For workers in “production and nonsupervisory” positions, the value of the average paycheck has actually declined in the past year. For those workers, average “real wages” – a measure of pay that takes inflation into account – fell from $22.62 in May 2017 to $22.59 in May 2018, the Bureau of Labor Statistics said.

This pool of workers includes those in manufacturing and construction jobs, as well as all “nonsupervisory” workers in service industries such health care or fast food. The group accounts for about four-fifths of the privately employed workers in America, according to BLS.

Without adjusting for inflation, these “nonsupervisory” workers saw their average hourly earnings jump 2.8 percent from last year. But that was not enough to keep pace with the 2.9 percent increase in inflation, which economists attributed to rising gas prices.

“This is very likely because of the spike in oil prices eating into inflation-adjusted earnings,” said Allen Sinai, chief global economist and strategist at Decision Economics. “We pay for energy-related costs out of our wages, out of our compensation. And it’s making a real impact.”

The fall in those wages has alarmed some economists, who say paychecks should be getting fatter at a time when unemployment is low and businesses are hiring.

“This is odd and remarkable,” said Steve Cornell Kyle, an economist at Cornell University. “You would not normally see this kind of thing unless there were some kind of external shock, like a bad hurricane season, but we haven’t had that.”

The falling wages promise to exacerbate historic levels of U.S. inequality. Within the labor force, it means workers who were already making less are falling further behind. And if private laborers as a whole are seeing their earnings flatten while the economy as a whole grows at an annual rate of more than 2 percent, that means the gains are going almost exclusively to people already at the top of the economic ladder, economists say.

“The extra growth we are seeing in the economy is going somewhere: to capital owners and people at the top of the income distribution,” said Heidi Shierholz, director of policy at the Economic Policy Institute and a former chief economist at the Labor Department, noting workers’ share of corporate income remained relatively low as of January. “And what we’ve seen is in recent period a much higher share of total income earned going to owners of capital.”

Stephen Moore, a conservative economist at the Heritage Foundation and campaign adviser to President Trump , said the figures were troubling. But he added that the drop in real wages could be a reflection of the economy adding low-end jobs, rather than declining values further up the chain. If so, he said, that would be a sign of economic vitality, as the economy pulled in unemployed workers.

But other experts doubted that argument. “For that to be true, you’d have to see that the jobs coming back are particularly low-wage jobs,” said Elise Gould, an economist at the Economic Policy Institute, a left-leaning think tank. “There was some evidence of that initially in the recovery, but I don’t think the evidence supports the idea.”

But why is wage growth so tepid?

This problem is not new: Slow wage growth bedeviled the Obama administration as well.

Economists broadly disagree about the cause of persistently weak wage growth, offering a variety of possible explanations.

Ernie Tedeschi, a former Treasury official under President Barack Obama, said the unemployment rate may create a misleadingly positive impression of the health of the jobs market, given how many Americans dropped out of the labor force during the Great Recession.

Weaker union rights for workers may also be cutting into their ability to force pay increases from their bosses, said Jared Bernstein, who served as an economic adviser to Vice President Joe Biden.

Trump officials pointed to what they called a strong growth in private business investment in the first quarter of 2018, after the tax law’s passage, and expressed optimism that the law would translate into higher wages for workers in the near future. They also dismissed the allegation that the data disproved their claim that the tax law would raise the average worker’s wage by $4,000.

“The law is just six months old,” said DJ Nordquist, chief of staff for Trump’s Council of Economic Advisers, in an email. “Our estimates [of the tax law’s benefits] were for ‘steady state’ – when the full effects of the law spread throughout the economy, which will take years, as we always said it would.”

But to Democrats, the tepid wage growth helps bolster their claim that the Republican tax law was overwhelmingly geared toward the wealthy and that a more direct role for the federal government is needed to help workers.

“Today, while the cost of health care, prescription drugs, gasoline and housing soar, the average worker, according to the Bureau of Labor Statistics, is now making slightly less than he or she made one year ago after adjusting for inflation,” Sen. Bernie Sanders (I-Vt.) said in an email to The Washington Post, arguing for a higher minimum wage and a single-payer health-care plan.

The economy’s booming. Some states have raised minimum wages. But even with recent wage growth for the lowest-paid workers, there is still nowhere in the country where someone working a full-time minimum-wage job could afford to rent a modest two-bedroom apartment, according to an annual report released Wednesday by the National Low Income Housing Coalition.

Not even in Arkansas, the state with the cheapest housing in the country. One would need to earn $13.84 an hour – about $29,000 a year – to afford a two-bedroom apartment there. The minimum wage in Arkansas is $8.50 an hour.

Even the $15 living wage championed by Democrats would not make a dent in the vast majority of states.

It gets worse in many metropolitan areas. San Francisco, Marin and San Mateo counties top the list of most expensive jurisdictions, where one would need to make $60.02 an hour to afford a modest two-bedroom apartment.

“The housing crisis is growing, especially for the lowest-income workers,” said Diane Yentel, president of the National Low Income Housing Coalition. “The rents are far out of reach from what the average renter is earning.”

Downsizing to a one-bedroom apartment will only help so much.

According to the report, a one-bedroom is affordable for minimum-wage workers in only 22 counties in five states: Arizona, California, Colorado, Oregon and Washington. Those states all set their minimum wages higher than the federal minimum of $7.25.

Nationally, one would have to earn $17.90 an hour to afford a modest one-bedroom apartment or $22.10 an hour for a two-bedroom rental. That’s based on the common budgeting standard of spending a maximum of 30 percent of income on housing.

The report estimates that renters nationally make an average of $16.88 an hour. That means even those making above minimum wage struggle to afford rent.

Housing costs have continued to rise with growing demand for rental housing in the decade since the Great Recession. At the same time, new rental construction has tilted toward the luxury market because of increasingly high development costs, the report said. The number of homes renting for $2,000 or more per month nearly doubled between 2005 and 2015.

“While the housing market may have recovered for many, we are nonetheless experiencing an affordable housing crisis, especially for very low-income families,” Sen. Bernie Sanders, I-Vt., said in the report.

The low-wage workforce is projected to grow over the next decade, particularly in service-sector jobs such as personal-care aides and food-preparation workers.

Meanwhile, the Trump administration has tried cutting federal housing subsidies for the lowest-income Americans. As it stands, only 1 in 4 households eligible for federal rent assistance gets any help, the report said. Housing and Urban Development Secretary Ben Carson recently proposed tripling rent for the poorest households and making it easier for housing authorities to impose work requirements on those receiving rent subsidies.