New Yorker writer Jane Mayer examines the origins, rise and dominance of a billionaire class to whom money is no object when it comes to buying power 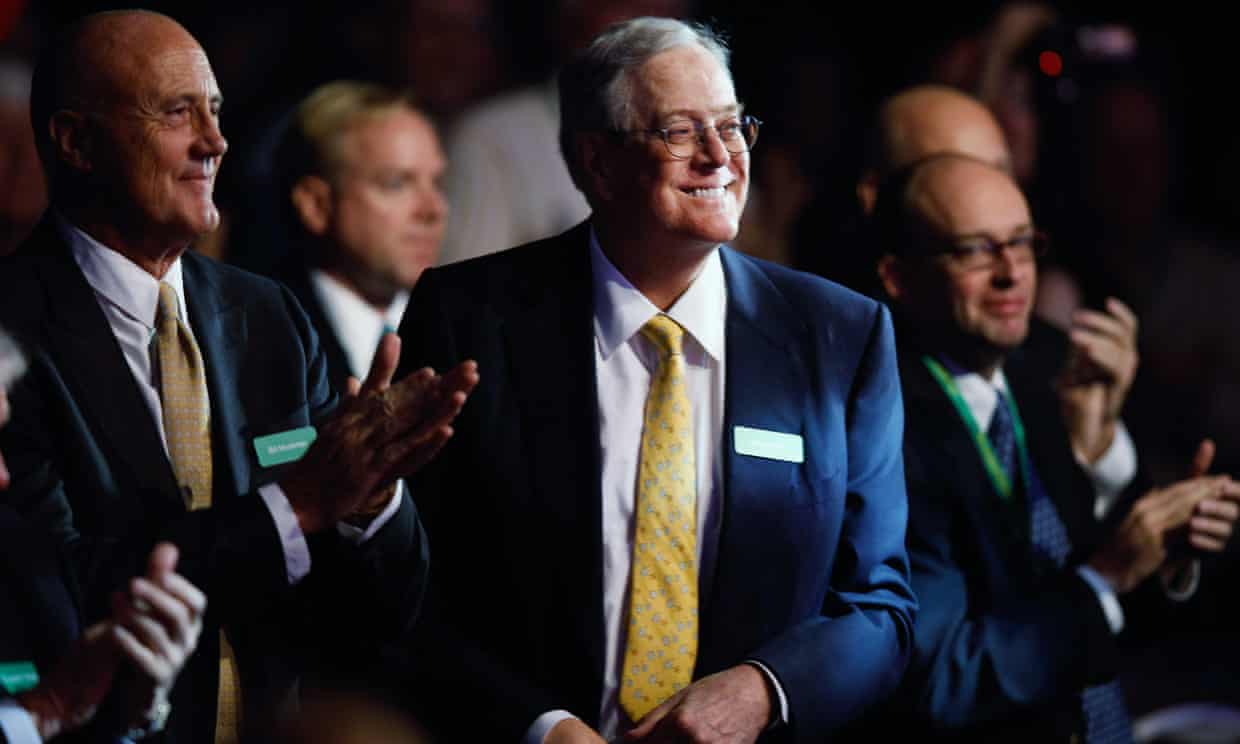 Lots of American industrialists have skeletons in the family closet. Charles and David Koch, however, are in a league of their own.

The father of these famous rightwing billionaires was Fred Koch, who started his fortune with $500,000 received from Stalin for his assistance constructing 15 oil refineries in the Soviet Union in the 1930s. A couple of years later, his company, Winkler-Koch, helped the Nazis complete their third-largest oil refinery. The facility produced hundreds of thousands of gallons of high-octane fuel for the Luftwaffe, until it was destroyed by Allied bombs in 1944.

In 1938, the patriarch wrote that “the only sound countries in the world are Germany, Italy and Japan”. To make sure his children got the right ideas, he hired a German nanny. The nanny was such a fervent Nazi that when France fell in 1940, she resigned and returned to Germany. After that, Fred became the main disciplinarian, whipping his children with belts and tree branches.

These are just a handful of the many bombshells exploded in the pages of Dark Money, Jane Mayer’s indispensable new history “of the billionaires behind the rise of the radical right” in the US.

A veteran investigative reporter and a staff writer for the New Yorker, Mayer has combined her own research with the work of scores of other investigators, to describe how the Kochs and fellow billionaires like Richard Scaife have spent hundreds of millions to “move their political ideas from the fringe to the center of American political life”.

Twenty years after collaborating with the Nazis, Fred Koch had lost none of his taste for extremism. In 1958, he was one of the 11 original members of the John Birch Society, an organization which accused scores of prominent Americans, including President Dwight Eisenhower, of communist sympathies.

In 1960, Koch wrote: “The colored man looms large in the Communist plan to take over America.” He strongly supported the movement to impeach chief justice Earl Warren, after the supreme court voted to desegregate public schools in Brown v Board of Education. His sons became Birchers too, although Charles was more enamored of “antigovernment economic writers” than communist conspiracies.

After their father died, Charles and David bought out their brothers’ shares in the family company, then built it into the second largest privately held corporation in America.

“As their fortunes grew, Charles and David Koch became the primary underwriters of hard-line libertarian politics in America,” Mayer writes. Charles’s goal was to “tear the government out ‘at the root’.”

Another man who studied Charles thought “he was driven by some deeper urge to smash the one thing left in the world that could discipline him: the government”.

Much of what the American right has accomplished can be seen as a reaction to the upheavals of the 1960s, when big corporations like Dow Chemical (which manufactured napalm for the Vietnam War) reached the nadir of their popularity.

In 1971, corporate lawyer (and future supreme court justice) Lewis Powell wrote a 5,000-word memo that was a blueprint for a broad attack on the liberal establishment. The real enemies, Powell wrote, “were the college campus, the pulpit, the media, the intellectual and literary journals, the arts and sciences”, and “politicians”.

He argued that conservatives should control the political debate at its source by demanding “balance” in textbooks, television shows and news coverage – themes that were echoed in inflammatory speeches by Richard Nixon’s vice-president, Spiro Agnew.

The war on liberals was so effective that practically everyone reacted to it: from the New York Times, which hired ex-Nixon speechwriter Bill Safire to “balance” its op-ed page, to the Ford Foundation, which gave $300,000 to the American Enterprise Institute (AEI) in 1972. The impact was cumulative: almost four decades later, Barack Obama was astonished by one of the first questions asked to him, by a New York Times reporter, after he became president: “Are you a socialist?”

The AEI was one of dozens of the new think-tanks bankrolled by hundreds of millions from the Kochs and their allies. Sold to the public as quasi-scholarly organizations, their real function was to legitimize the right to pollute for oil, gas and coal companies, and to argue for ever more tax cuts for the people who created them. Richard Scaife, an heir to the Mellon fortune, gave $23m over 23 years to the Heritage Foundation, after having been the largest single donor to AEI.

Next, the right turned its sights on American campuses. John M Olin founded the Olin Foundation, and spent nearly $200m promoting “free-market ideology and other conservative ideas on the country’s campuses”. It bankrolled a whole new approach to jurisprudence called “law and economics”, Mayer writes, giving $10m to Harvard, $7m to Yale and Chicago, and over $2m to Columbia, Cornell, Georgetown and the University of Virginia.

The amount of spent money has been staggering. Between 2005 and 2008, the Kochs alone spent nearly $25m on organizations fighting climate reform. One study by a Drexel University professor found 140 conservative foundations had spent $558m over seven years for the same purpose.

The next step for the radical right was to support the creation of the Tea Party movement, through organizations like Americans for Prosperity, which was funded by the Kochs.

“The Heritage Foundation, the Cato Institute and Americans for Prosperity provided speakers, talking points, press releases, transportation, and other logistical support,” Mayer writes. As the writer Thomas Frank has pointed out, the genius of this strategy was to “turn corporate self-interest into a movement among people on the streets”.

The last element of this multi-pronged campaign saw the direct investment of hundreds of millions of dollars in political campaigns at every level, from president to city councilor. In 1996, a last-minute $3m campaign of attack ads against Democrats in 29 races, a campaign which may have been financed by the Kochs, was considered outrageous and extravagant. But after the disappearance of virtually all restrictions on campaign contributions – another result of rightwing lobbying and the supreme court’s Citizens United decision – $3m is now a tiny number.

In the 2016 elections, the goal of the Koch network of contributors is to spend $889m, more than twice what they spent in 2012.

Four years ago, because Obama had the most sophisticated vote-pulling operation in the history of American politics, and a rather lackluster opponent, a Democratic president was able to withstand such a gigantic financial onslaught. This time around, it’s not clear that any Democrat will be so fortunate.

… we have a small favor to ask. More people are reading the Guardian than ever but advertising revenues across the media are falling fast. And unlike many news organisations, we haven’t put up a paywall – we want to keep our journalism as open as we can. So you can see why we need to ask for your help. The Guardian’s independent, investigative journalism takes a lot of time, money and hard work to produce. But we do it because we believe our perspective matters – because it might well be your perspective, too.