A cub scout in Colorado has been cast out of his den after he asked a state legislator pointed questions about racially charged comments she made about African-Americans in 2013 and a gun bill she co-sponsored.

Ames Mayfield, 11, and other members of his den in Broomfield had a question-and-answer session with state Sen. Vicki Marble (R) at an Oct. 9 meeting. Topics raised by the scouts  included the border wall, fossil fuels, and former President Barack Obama, according to The Denver Post.

Mayfield queried Marble about comments she made during a 2013 hearing on poverty suggesting that mortality rates among blacks were tied to their consumption of barbecue ribs and fried chicken.

“I was astonished that you blamed black people for poor health and poverty because of all the chicken and barbecue they eat,” Ames asked, according to ABC News.

Marble responded, “I didn’t; that was made up by the media.” She added, “So, you want to believe it? You believe it. But that’s not how it went down. I didn’t do that. That was false. Get both sides of the story.”

The complete exchange can be seen here:

For the sake of accuracy, the Denver newspaper reprinted Marble’s original comments:

“When you look at life expectancy, there are problems in the black race. Sickle-cell anemia is something that comes up. Diabetes is something that’s prevalent in the genetic makeup, and you just can’t help it.

“Although I’ve got to say, I’ve never had better barbecue and better chicken and ate better in my life than when you go down South and you, I mean, I love it. Everybody loves it.”

Mayfield also asked the senator about her co-sponsorship of a bill to allow domestic violence offenders to continue to own a gun, phrasing it bluntly.

“Why on earth would you want someone who beats their wife to have access to a gun?” he said.

The boy’s den leader cut him off and he was kicked out of the group a few days later, according to Denver station KMGH-TV.

His mother, Lori Mayfield, told the station that her son had no clue he did anything wrong.

“He is heartbroken his den leader kicked him out. What does that teach scouts (about asking challenging questions)?” she said. 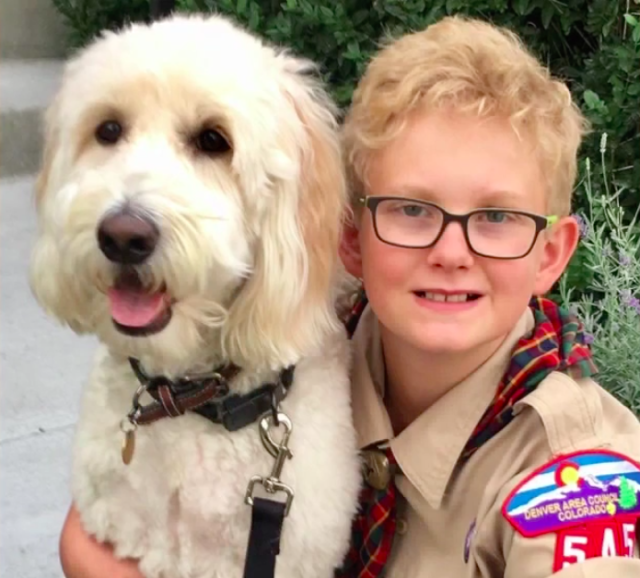 Marble is steering clear of the controversy.

“Decisions about who is in or out of a den are internal organizational matters that I won’t second guess,” Marble told the Denver Post by email. “I don’t blame the boy for asking the questions, since I believe there was an element of manipulation involved, and it wasn’t much different from the questions I normally field in other meetings.”

Lori Mayfield told the paper that her son spent a lot of time researching Marble before the den meeting.

“The only coaching I gave him was to be respectful,” she said. “Don’t be argumentative, preface things ‘with all due respect.’ I felt my son followed directions. He asked hard questions, but he was not disrespectful.”

Now she and her son are looking for a new den.

The Denver area council of the Boy Scouts told KMGH that a scout’s eligibility is ”up to the chartered organization, but it is working to help Ames find another den “so that he may continue to participate in the scouting program.”