Could a pill help with peanut allergies?

One of every 70 children and one of every 160 adults is allergic to peanuts, making it the most common food allergy.

For those who are severely allergic, the world can be a minefield.

A person with a serious allergy to peanuts can react to as little as a tiny sprinkling of the nut, with symptoms that can range from a simple rash to anaphylaxis, in which the immune system releases a flood of chemicals that can cause the person to go into shock and potentially die.

But a preventive treatment could be on the horizon that might help to guard against the most severe reactions.

Research has shown that pills containing peanut protein can act like a vaccine for the immune system. Use of the pills in a method called oral immunotherapy could help to reduce the severity of an allergic reaction to peanuts, according to a study published in the Journal of Allergy and Clinical Immunology: In Practice.

Food supplements for young children that may help prevent allergies

To be clear, the only way for a person with a peanut allergy to avoid all risk is to stay away from peanuts.

The immunotherapy treatment is geared toward people with the allergy who, while being careful to avoid peanuts, may still may be exposed accidentally.

The goal of the treatment is not to try to cure the allergy, but to train the immune system of an allergic person not to react as severely if exposed to a small amount of peanut. It works by slowly, over time, desensitizing the patient with increasing doses of the allergy-inducing culprit.

The study seeking to measure the possible effectiveness of the method was conducted on 29 people between the ages of 4 and 26 in 10 U.S. cities, plus another 26 in a control group. It was funded by Aimmune, the developer of the treatment. Authors of the research cite eight other articles on tests on the therapy from 2009 to 2015.

Each of the group of 29 participants in the study was given an experimental drug containing peanut flour packed in a pill. Those in the control group were given pills containing only oat flour.

Over a period of six months, participants receiving the peanut-flour pills were given gradually stronger doses of the powder.

People in both groups were then given a “food challenge,” with exposure to about one and a half peanuts. Among those in the group who had been taking the peanut pills, 79 percent exhibited no reactions to the allergen. 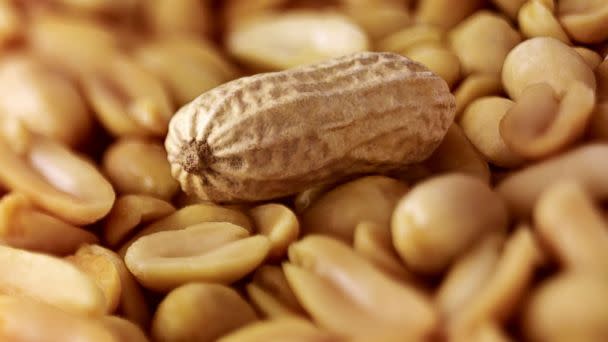 Among those who had been receiving the placebo, the percentage was reversed: 81 percent exhibited mild to moderate reactions such as itchy body rashes, vomiting, abdominal pain or anaphylaxis, with none of the responses being life-threatening. Only 19 percent in this group showed no reaction to the allergen.

One of the study’s authors, Dr. A. Wesley Burks, a professor of pediatrics at the University of North Carolina, said, “It’s great to have patients go from managing to tolerate at most the amount of peanut protein in a 10th of a peanut without reacting, to successfully eating the equivalent of between two to four peanuts with nothing more than mild, transient symptoms, if any at all.”

Other ongoing research, cited in a press release from Aimmune, has about 500 participants, all children between 4 and 17 years old. About 400 of them took escalating doses of the peanut-powder pills, with the rest taking placebo pills. As in the published study, about 76 percent of those taking the peanut pills were able to tolerate a small amount of peanut exposure in contrast to only about 8 percent of those in a control group, according to the press release.

More and larger studies will be needed before the treatment can be proven to work and submitted for FDA approval.

Meanwhile, it’s unclear what the price of this series of treatments would be, or whether insurance would cover it.

Dr. Najibah Rehman is a third-year preventive medicine resident at the University of Michigan, working in the ABC News Medical Unit.