California’s Raging Wildfires as You’ve Never Seen Them Before 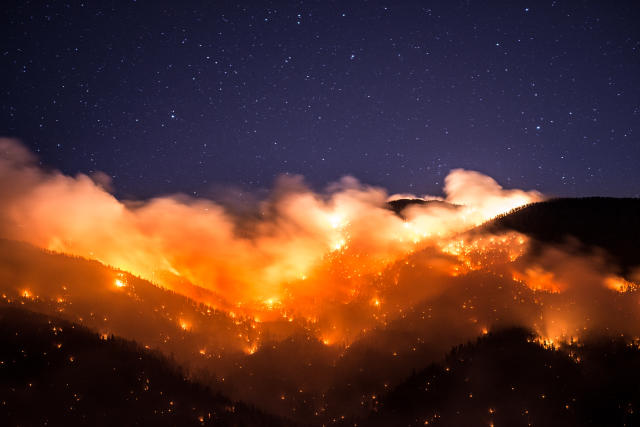 On the Front Lines of California’s Increasingly Devastating Fires

Forest fires have long been a part of life in California, but not always like this. In recent years, artist Jeff Frost, based near Joshua Tree National Park, has watched as fires raged across the West Coast with increasing frequency and intensity. “Fire is a natural part of nature,” he says, “but what you’ll hear veteran firefighters say over and over, ‘I’ve never seen fire behavior like this.” Fire seasons are also starting earlier and ending later, on average 78 days longer than they were in 1970. On Monday, late in the fire season, Frost was chasing blazes in Sonoma and Napa counties, which have scorched tens of thousands of acres and led to widespread evacuations, including in Santa Rosa, Calif.

Four years ago, Frost, now 39, decided to begin documenting the fires. He put himself through the most intense fire-safety training courses he could find, enrolling in courses sanctioned by the U.S. Forest Service, then equipped his camper with a bed and a generator and headed to the front lines of California’s biggest fires.

Frost’s project, “California on Fire”, will be a feature-length art film combining his wildfire time lapses. The non-narrative film will look at forest fires loosely through the five stages of grief: denial, anger, bargaining, depression and acceptance. The stages will follow the life of wildfires, looking at their causes and effects from their ignition to the twisted metal and charred forests they leave behind. Frost is especially interested in exploring the role human involvement plays in these fires, both intentional and unintentional. “Human beings are stewards of the planet,” he says. “It’s just a question of whether we’re good stewards or bad stewards.”

On scene, Frost shoots sequences of hundreds of still photos, which he then combines into time-lapse videos. He previously used this approach at Joshua Tree National Park and at CERN, the research center renowned for building particle accelerators like the Large Hadron Collider.

For the “California on Fire” project, Frost has shot more than 300,000 images at over 40 forest fires, resulting in over 500 time lapses ranging from 1 to 30 seconds. The blazes he has documented include the Erskine wildfire outside of Bakersfield in June 2016 that destroyed 386 structures and led to two deaths, and the King wildfire near Lake Tahoe in September 2014, which destroyed 80 structures and scorched almost 100,000 acres of land. While he is fascinated by fire, Frost’s obsession is to create an art piece that speaks to a larger reality: The role climate change plays in the fires.

“The intent is to show the effect of climate change right now, not just in the future,” he says. “Burning people’s houses down is not abstract.” Over the past three decades, climate change has doubled the area burned by forest fires in the western United States and the fire season has grown significantly longer. A number of climate-related issues are intensifying fires. Drier climates and more available fuel cause fires to start easier, burn longer and move faster. In addition, forest fires lower the number of trees that can absorb the carbon dioxide that causes climate change in the first place.

The federal cost of fighting forest fires has risen substantially. Fires cost the U.S. Forest Service more than $2 billion in 2015, over half of its annual budget, up from $240 million in 1985 (not adjusted for inflation).

While shooting the Rocky fire in Lake County in July 2015, Frost followed a firefighting team into a valley only to find himself completely surrounded by flames until a backup team arrived. “The wind was whipping across the hillside and catching grass on fire. I was sitting in the truck freaking out,” he says. “There were droves of insects running into the truck trying to get away from the fire. We had to wait for two hours before somebody could come in and retrieve us. That fire was a total of 70,000 acres but that day it burned 50,000.” Frost’s point-of-view video below documents his close call.

After almost four years, Frost has shifted away from the front lines and turned his focus to covering the aftermath. He is shooting scorched landscapes and the remains of cars left behind. Recently, he started picking up pieces of charred aluminum, polishing them and displaying them in art exhibits to bring awareness to the power of forest fires. He expects to complete his time-lapse film in early 2018. A pre-public release will go out to his Patreon followers before he submits the film to Cannes and Sundance.