Born in the U.S.A. and working in the fields — what gives? 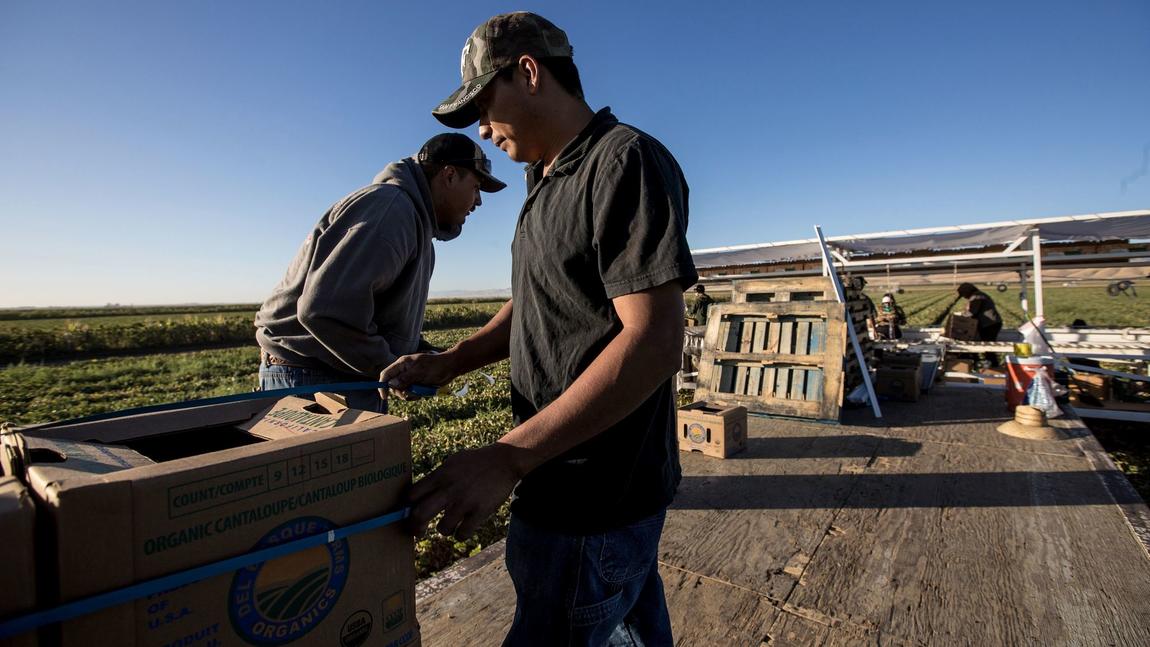 Nicholas Andrew Flores swatted at the flies orbiting his sweat-drenched face as he picked alongside a crew of immigrants through a cantaloupe field in California’s Central Valley.

The 21-year-old didn’t speak Spanish, but he understood the essential words the foreman barked out: Puro amarillo. And rapido, rapido! Quickly, Flores picked only yellow melons and flung them onto a moving platform.

It was hard and repetitive work, and there were days under the searing sun that Flores regretted not going to a four-year college. But he liked that to get the job he just had to “show up.” And at $12 an hour, it paid better than slinging fast food. 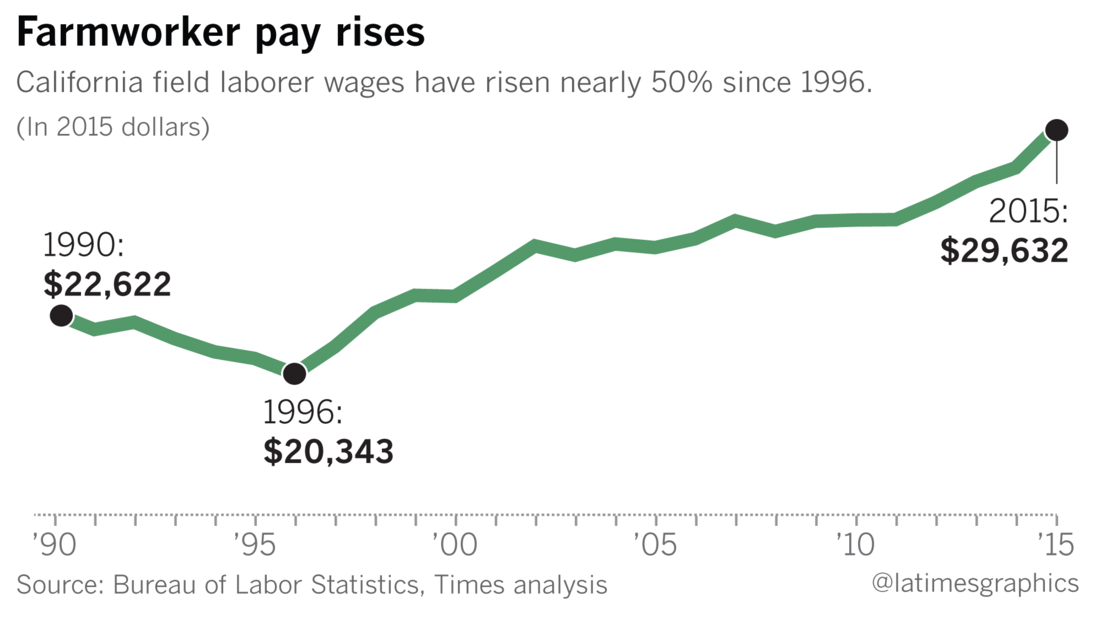 For Joe Del Bosque of Del Bosque Farms in the San Joaquin Valley, American-born pickers like Flores, though rare, are always welcome.

For generations, rural Mexico has been the primary source of hired farm labor in the U.S. According to a federal survey, nine out of 10 agricultural workers in places like California are foreign-born, and more than half are in the U.S. illegally.

But farm labor from Mexico has been on the decline in California. And under the Trump administration, many in the agricultural industry worry that deportations — and the fear of them — could further cut the supply of workers.

But try as they have to entice workers with better salaries and benefits, companies have found it impossible to attract enough U.S.-born workers to make up for a shortage from south of the border.

Del Bosque said he’ll hire anyone who shows up ready to work. But that rarely means someone born in the U.S.

“Americans will say, ‘You can’t pay me enough to do this kind of work,’” Del Bosque said. “They won’t do it. They’ll look for something easier.” 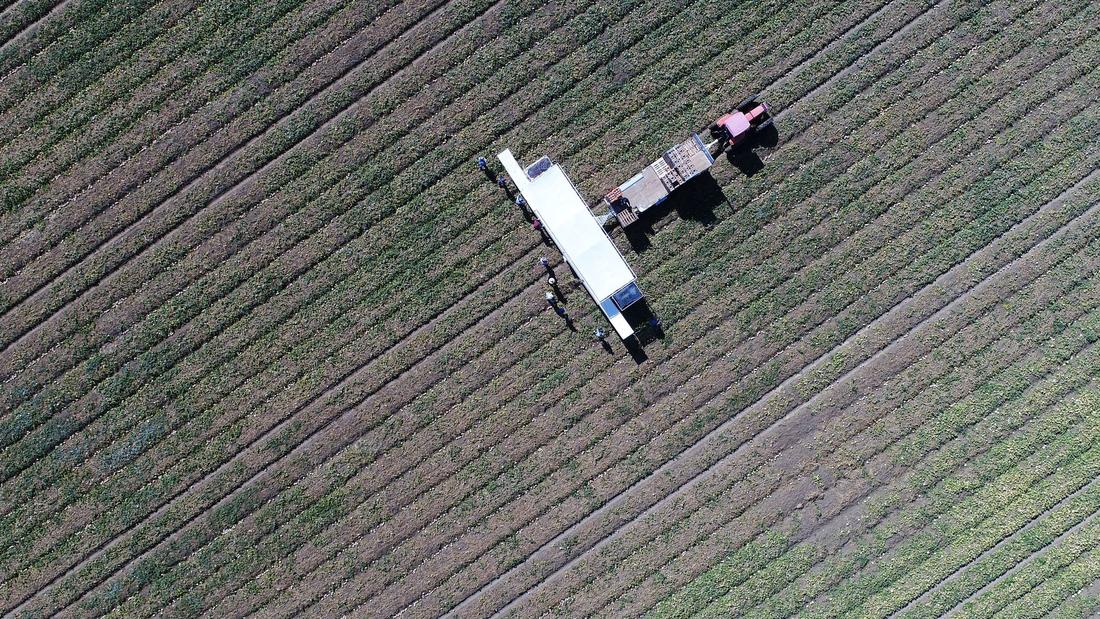 For some immigrants working the fields, people like Flores are a puzzle — their sweating next to them represents a kind of squandering of an American birthright.

“It’s hard to be here under the sun. It’s a waste of time and their talents in the fields,” said Norma Felix, 58, a Mexican picker for almost three decades. “They don’t take advantage of their privilege and benefit of being born here. They could easily work in an office.”

Most don’t last long, she said.

“There is always one or two who show up every season,” Felix said. “They show up for three or four days and turn around and leave.”

Agriculture’s reliance on immigrant labor, especially in the American West, goes back to the late 1800s, after the completion of the First Transcontinental Railroad, said J. Edward Taylor, a UC Davis rural economist.

“The domestic farm workforce was simply not big enough to support the growth of labor-intensive fruit and vegetable crops,” he said.

With the notable exception of the Dust Bowl years in the 1930s — when American migrant workers from Oklahoma, Arkansas, and Texas moved out west after a severe drought devastated their livelihoods — there was never a time when mostly U.S.-born farm-workers picked in California, Taylor said.

But those workers eventually moved on to nonfarm jobs.

Now, Mexico is undergoing some of the same changes the U.S. did around the middle of the 20th century, Taylor said, with “employment shifting from farms to industry and services.”

According to Taylor’s research, the number of farm-workers coming out of rural Mexico is decreasing by an estimated 150,000 a year. That means U.S. and Mexican farmers will have to increasingly compete for a dwindling pool of labor.

Some advocates of restricting immigration see greater farm mechanization and the importation of fruits and vegetables as ways to reduce the reliance on labor from illegal immigration.

“If we tighten immigration rules, there are going to be fewer farm jobs, but they will be better-paid. They will be more stable and consistent with more regular jobs,” said Mark Krikorian, executive director for the Center for Immigration Studies in Washington, D.C. “That should be the goal. Huge increases in individual productivity so where you now need 200 farm-workers working seasonally, a farmer would be able to employ 10 people year-round, full-time.”

Taylor said there’s reason to believe that technology would take over before pay increased enough to attract U.S.-born employees to the fields in large numbers.

“We would develop new picking machines, including robotic harvesters, and use them out in the fields instead of paying wages that could possibly be high enough to induce some U.S.-born farm-workers out into the fields,” he said. 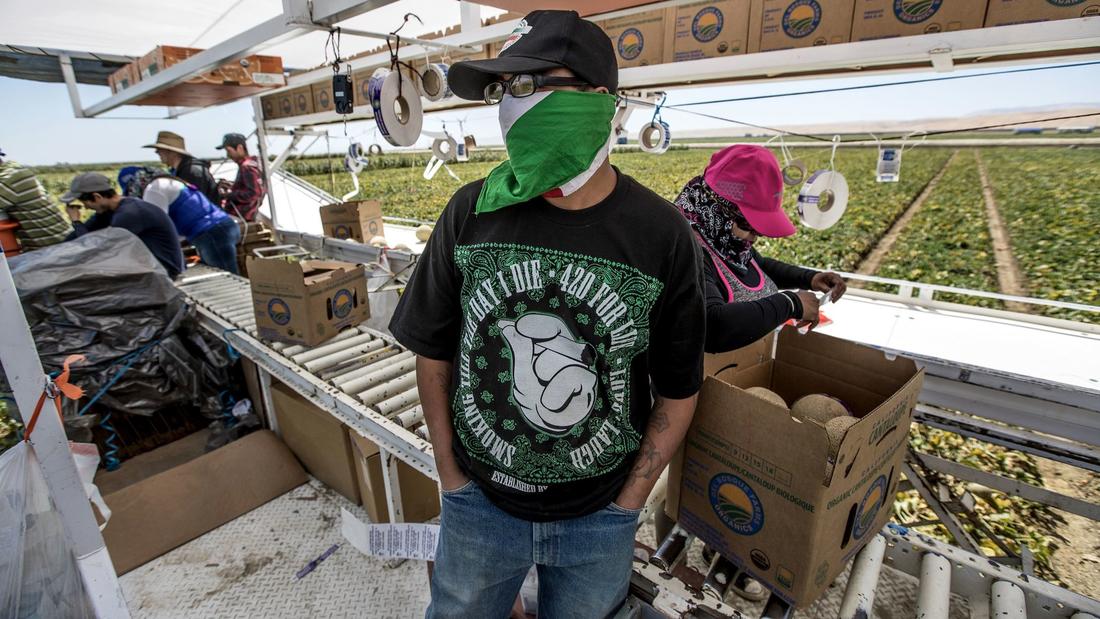 Erick Roman waits for boxes of cantaloupe to fill so he can move them through a labeler at Del Bosque Farms in Los Banos. (Brian van der Brug / Los Angeles Times)

In California, farm wages increased 13% from 2010 to 2015, according to a Los Angeles Times analysis of data from the Bureau of Labor Statistics. Some farmers have resorted to giving field laborers benefits such as 401(k) plans, health insurance and even subsidized housing. 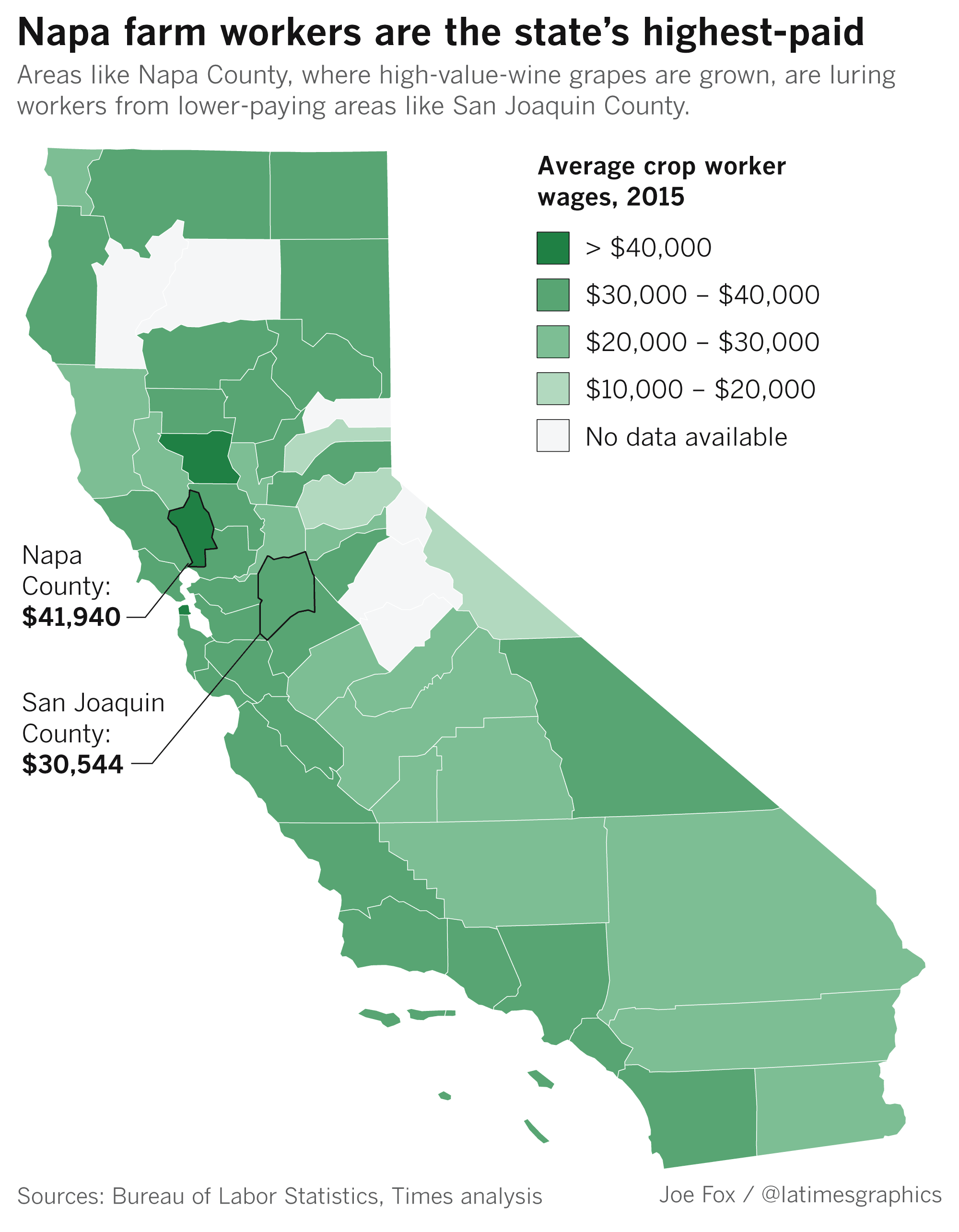 At Del Bosque Farms, about 300 workers pick during the cantaloupe season. Some of the U.S.-born laborers who show up could not get jobs in industries like fast food or retail because of criminal convictions. Others felt college was out of reach and they needed quick money.

Diego Romo, a 24-year-old American, said he grew up watching his father work the cantaloupe fields. The Los Banos resident has worked every season at Del Bosque Farms since he was 17.

When he’s not in the fields, he’s at a local college, studying to become a corrections officer. He harvests cantaloupe to help out his parents and to pay for his textbooks, he said.

On a recent autumn afternoon, he stacked cardboard boxes full of cantaloupe into pallets. His father, Rodrigo, worked on the same crew. He put the boxes together on a moving platform — an easier job for older workers.

He did not like that his son worked in the fields.

“I want you to study hard and not work out there … like I do every year,” he told him in Spanish. “You need to better yourself.”

Diego Romo said he’s aware how unusual workers like him are. Those who show up usually end up being overcome by the heat or the sheer repetitive diligence required to do the work. 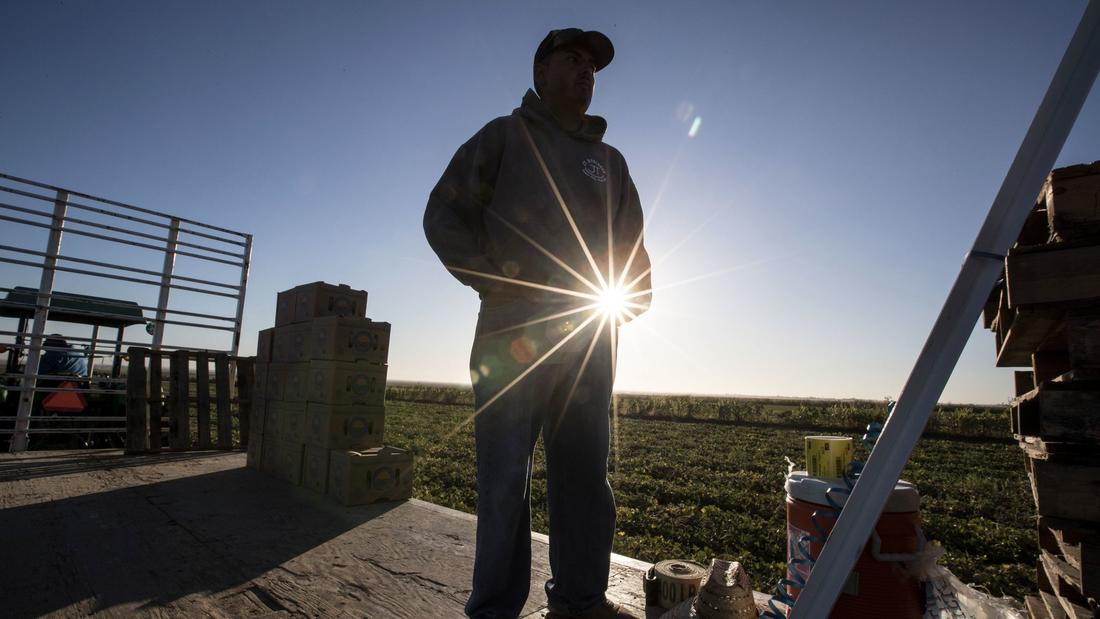 He takes pride in having lasted so long. But there are days when he regrets having not done better in high school. Perhaps he could have done well enough to get a full ride into college. Now Romo nags his 15-year-old brother, sounding like his father: “Study hard and better yourself. You see how we have to work every year — sunrise to sunset.”

Ignacio Leon, a 21-year-old from Los Banos, was on his second day on the job at Del Bosque Farms. He was happy for the work because he needed to make enough to pay off a traffic ticket so he can start his career in truck driving, he said.

Leon was born in the U.S. and graduated high school, but said he got into trouble with the law.

“I do feel like I did mess up big-time. I do regret it,” he said. “Also, not going to college. In high school, I got too lazy.”

He told a cash-strapped friend of his to join him in the fields. The friend rejected the offer, Leon said, preferring to stay home and play video games at his parent’s house.

The cantaloupe harvest was still weeks away from ending. But a few days after starting a job that he described to his friend as “easy money, bro,” Leon stopped showing up to work. 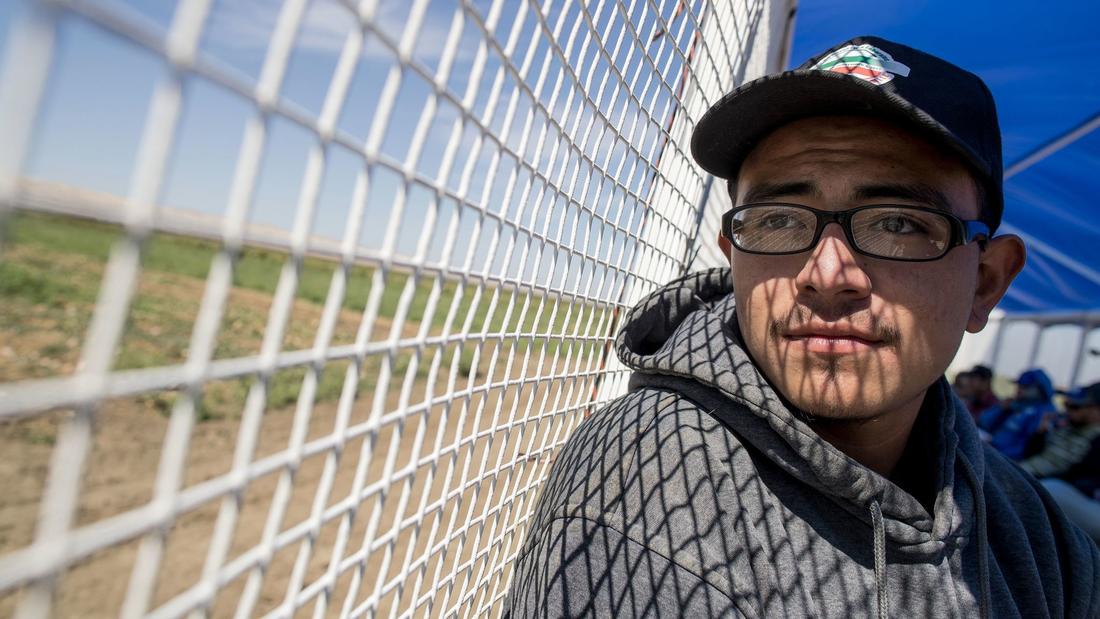