Battle of the Century

The war of words between Donald J. Trump and Kim Jung Un should really be fought in an arena familiar to both of these antagonists, an MMA ring in Las Vegas. 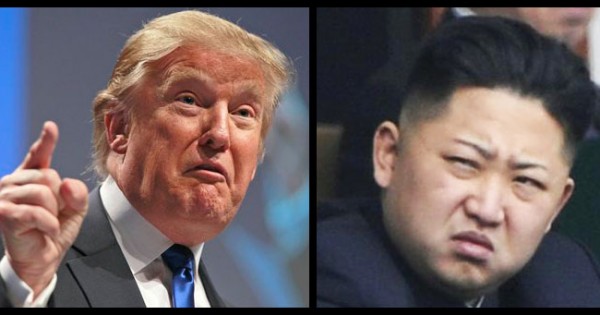 A Conor McGregor v. Floyd Mayweather rematch would certainly take second billing to any MMA fight between The Dotard and Rocketman. Worldwide viewership would be off the charts. Naturally, the Art of the Donald would try to negotiate a favorable pay per view deal, with an 80-20 split; but Rocketman would surly threaten lobbing a missile at Guam unless he gets equal treatment.

The purse should be set by the United Nations. Winner take all. If Dotard wins, Rocketman will have to give up his maniacal plans to join the list of nuclear juggernauts and also use that money saved from cuts in onerous military spending to actually feed every North Korean citizen more than a small bowl of rice every day. If Rocketman wins, The Dotard will have to actually appoint highly qualified State Department folks, who would then sit down with the North Koreans and negotiate an effective and lasting peace accord. Both fighters must stipulate to parking their oversized egos and stopping the crazy escalation of boastful and reckless hostilities.

This fight must be shown in Prime Time on broadcast and cable TV so all the world would be able to view it for free.

As soon as this fight would be announced, Las Vegas and other book-makers would quickly establish the odds. Based on the all important jowl factor, The Dotard with 4 chins and Rocketman with no chin at all, this would be a plus for Dotard. And the fact that Rocketman broke both his ankles because he put on two much weight and insists on wearing shoes with Cuban heals so that he looks taller than he is, another plus for Dotard. Since Dotard hates any type of exercise and Rocketman does a lot of parading before his military troops, Rocketman gets an advantage. Rocketman smokes and drinks to excess but Dotard loves fast food so I guess that’s a draw. The Dotard gets a boost from his past experience in professional wrestling. Since Rocketman is almost 40 years younger, that should be an advantage for him. But to be fair to The Dotard, considering his advanced age and his elevated PSA levels, both fighters would get two covfefe breaks; but The Dotard would get two additional breaks. Considering the physical condition of these two participants, if either fighter makes it past the second round, it will be a miracle.

Rocketman would have Dennis Rodman for his cornerman and The Dotard would certainly use Vladimir.

The fight would conform to unified MMA rules. They would be designated Super Heavy Weights. No No’s include

My prognostication? Late in the 1st round, Dotard grabs Rocketman by the bul-al (Korean for testicles) and refuses to let go. Rocketman finally screams no mas. Dotard does a disjointed victory dance but is quickly disqualified for unsportsmanlike conduct. Dotard goes on a twitter rant and claims Referee HRC fixed the fight.

It appears both of these flawed and unlikely leaders probably wouldn’t think twice about sending young men and women into battle for the slightest of provocations or insults, but does anyone actually believe either one would lead the charge.