MESA, Ariz. – There’s nothing in the closet. Nothing under the bed. Nothing coming to get you.

What do you tell the children then?

Hide. Run. Stay close. Come out with your hands up. Be brave. I love you. Be brave.

Anthony Rizzo returned Monday from his town. Parkland, Florida is the last casualty. The latest one. He returned mad and sad and feeling helpless, another American with a soul. He asked for change but wouldn’t say how, leaving it there, helpless like the rest. Just stop shooting people, maybe. Stop killing people.

And, damn, he returned proud of his town. Prouder, he’d probably say. Those people, in the right place at the wrong time, honored their dead children and friends and dads. They lifted their heads and raised their voices. They want change too. Fewer tears, candles, vigils, funerals.

Anthony’s parents settled in Parkland back when it didn’t have use for a stoplight. They raised their children with the town, like it was supposed to be, and raised their town with the children.

“Then you got this monster coming in …” Anthony said. 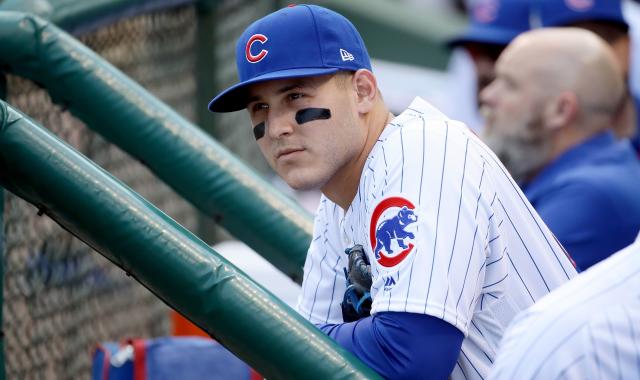 Anthony Rizzo offered his support while pleading for real change during a vigil for the victims of the horrific Valentine’s Day shooting at Marjory Stoneman Douglas High School in Parkland, Florida. (AP)

When Parkland became a casualty Anthony had to go stand in what his town had become, through no fault of its own, another town in the right place at the wrong time. He spoke to the people and hoped it might help and was afraid it wouldn’t, couldn’t, because what were words besides something to buy time until the next horror show.

“Just to see how real it is, it’s sad. It’s why I’m so proud of what they’re doing back in Parkland. They’re going to turn this tragedy hopefully into something really, really positive.”

He knew that football coach who took a bullet. Everybody knew coach Aaron Feis. He knew the families who grieved. His agent’s niece died there, in one of those hallways or classrooms. He knows the teachers who herded potential targets, who suddenly understood the difference between a drill and the real thing, because the drills didn’t involve tying tourniquets.

In Arizona, Anthony heard there’d been another shooting somewhere out there. That the details were vague. He went back to his golf game.

“Because that’s how numb this country is to it,” he said. “Until something crazy happens, when you hear open shooter nowadays, it’s like, oh, OK, take your next breath, keep going.”

Over the next hours, the gunman got closer. Closer to Anthony’s town, his world. Closer to his people. The injuries became worse, until they became unfathomable. The numbness blew into grief. Something crazy had happened.

Days later, here they are. It’s the town with the young woman demanding action through her angry tears. It’s the town with the young man saying: No more. Not here. Not anywhere. Kids sorting their heartache from their rage, they won’t shut up, bless them, and they won’t be victims, and they won’t be bullied, and maybe this is the change. Maybe this is where Anthony becomes their people. Where we all do.

“They just went through – who knows, I can’t tell them what they just went through, the scariest time of their life, that nobody should have to go through,” he said. “And for them to be outspoken about it, it shows they are not going to sit back and be another statistic. They really want to make a change. Hopefully this … I can’t even sit up here with confidence and say hopefully this is going to be the last mass shooting, because it probably won’t be. But, hopefully this is one of the steps in the right direction.

“You just hope that somewhere up the line of command, people are thinking a lot of the same things innocent kids are thinking. Why? Why? Why am I scared to go to school? Why am I afraid to say goodbye to my son or daughter?”

He wore a uniform again, ready to get on with it. What happened – the beds left empty, the lives unraveled, the monster who came – won’t ever be undone. He left because he’d believed he had to, and returned unsure if he’d helped, but was hopeful. He’d tried. He’d keep trying.

“I mean, baseball is just another thing that puts life in perspective,” he said. “I love baseball. It’s what I do. I said it when I spoke at the vigil, it’s gonna get easier. Life’s gonna go on. The sun’s still gonna rise. So, same thing. It’s getting back to that normal routine as fast as you can. Don’t forget about it. Keep it in your mind. But, you gotta get back to what you love doing.”

It’s what you tell the children now.