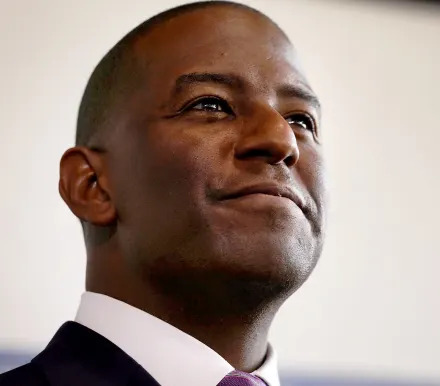 Tallahassee mayor and Democratic gubernatorial hopeful Andrew Gillum is in the midst of a toss-up race with former congressman and serial accidental racist Ron DeSantis, a designation that prompted CNN to broadcast Sunday night’s debate between the two men live on national television. As evidenced by this exchange, in which DeSantis responds to a question about whether Donald Trump is “a good role model for the children of Florida” by speaking at length about the U.S. embassy in Israel, it appears that in retrospect, he should have spent more time preparing for his big moment.

The candidates touched on all the substantive issues you’d expect over the hour-long event—climate science (Gillum believes in it; DeSantis has questions), race (Gillum is black; DeSantis warned Floridians not to “monkey” this election up), and their plans for health care (Gillum wants to expand Medicaid; DeSantis literally doesn’t have one.) But the most impactful sequence came during Gillum’s closing argument, when he framed the race as a referendum not only on the candidates’ platforms, but also on the brand of mistrust that the president and his acolytes used to earn their stranglehold on power in Washington.

In Trump’s America, we’ve been led to believe that we’ve got to step on our neighbor’s shoulder, their face, and their back in order to get ahead. Well, I reject that. And we have an opportunity on November 6 as a collective, as a state, to say, “We deserve better. We want better.” We want better schools, access to healthcare, a clean economy, and a restorative justice system that works hand in glove between the community and law enforcement for all of our benefit.

“I’m asking you all for the only thing in life that my mother ever told me to ask for, and that’s a chance,” he concluded. “Let’s bring it home.”

Razor-thin polling margins aside, this race has managed to garner national attention in large part because of the sharp contrast between the two candidates, who are treated in the media as conveniently-packaged representatives of polarized politics in 2018: Gillum is a Bernie-backed progressive who has called for the abolition of ICE and the impeachment of Donald Trump, while DeSantis is one of the many unexceptional GOP politicians who have been become relevant by going full MAGA. A recent campaign ad in which he helps his son “build a wall” out of toy bricks feels like a well-executed SNLdigital short-style parody until the “PAID FOR RON DESANTIS FOR GOVERNOR” disclaimer appears at the end.

Given that Trump is the most recent presidential candidate to win in Florida, and that the state has twice picked Rick Scott to serve as its governor, a common early reaction to Gillum’s emergence was that in a reddish-purple state, he might be a few beats too far to the left to have a chance in the general election. DeSantis had the winning playbook down.

Whether or not this narrative is accurate—and the debate audience’s incredulous laughter at that bizarre Israel pivot suggests that it is not—Gillum has still been able to reach center and right-leaning types who might disagree with him on policy by appealing to their core values instead. When stripped of its ripped-from-the-headlines racist or xenophobic or Islamophobic trappings, what Trump and DeSantis are always selling is the notion that life in America is a zero-sum game, and that voters must support Republican or else risk losing the game to brown people. Andrew Gillum is asking Floridians, regardless of their partisan or ideological leanings, to be more optimistic people than that. After two straight years of GOP fear-mongering, maybe they’re ready to feel hopeful about the future again.

Desantis vs Gillum: Florida governor debate heats up over climate change and race 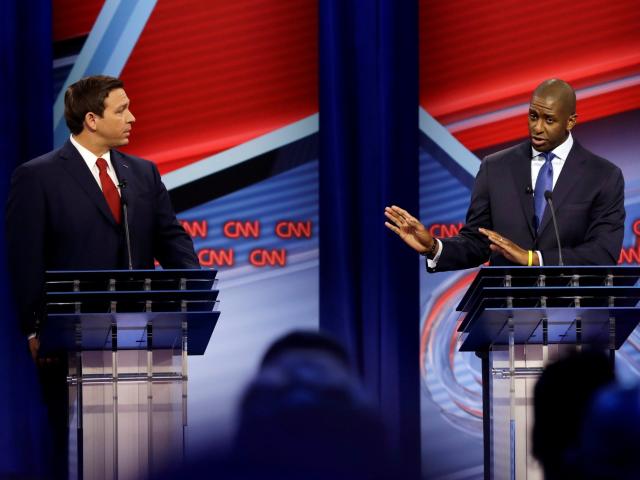 Florida gubernatorial candidates Andrew Gillum and Ron DeSantis have sparred in a heated debate that touched on issues ranging from the environment to race, as voters consider who would best serve them in the statehouse.

Just hours after a new poll showed that Mr DeSantis, a former congressman. trailed Mr Gillum, the mayor of Tallahassee, by double digits, the onetime US representative leaped at the chance to attack his opponent by calling him a “failed mayor” and saying he is “involved in corruption”.

“Andrew is a failed mayor,” Mr DeSantis, the Republican in the race, said before Mr Gillum even spoke a word on Sunday. “He’s presided over a crime-ridden city. He’s involved in corruption. He’s not the guy to lead our state.”

Mr Gillum, who appeared somewhat taken aback by how quickly his opponent attacked, responded with a deadpan: “Well, that was a mouthful.”

The brawl between the two candidates touched on a range of issues including health care policy, climate change, and, of course, President Donald Trump. While the governorship has zero direct impact on congress and the president’s ability to enact legislation, the race has come to be seen as a proxy for the larger national political debate.

With Mr Gillum calling for Mr Trump’s impeachment while Mr DeSantis remains a fierce advocate on the president’s behalf, the race has come to be seen as a referendum on the work being done in the White House.

The hour-long debate was kicked off by CNN moderator Jake Tapper, who asked the candidates about climate change — a question that came just after yet another hurricane battered the state and leveled homes.

“I don’t want to be an alarmist. I want to look at this and do what makes sense for Florida,” said Mr DeSantis, who denied claims that he had questioned the science behind climate change.

“What Florida voters need to know is that when they elect me governor, they are going to have a governor who believes in science,“ Mr Gillum said. “Which we haven’t had for quite some time in this state.”

The two also sparred over race, with Mr Gillum — a black man — claiming that his opponent had sought to cast the entire election around race, after Mr DeSantis went on Fox News and warned Floridians against “monkey this up by trying to embrace a socialist agenda”. Mr DeSantis sought to minimize those concerns, saying “Floridians can know that I’ll be a governor for all Floridians”.

Mr Gillum responded: “He has only continued in the course of his campaign to draw all the attention he can to the color of my skin. The truth is, I’ve been black all of my life. So far as I know, I will die black.”

Mr Gillum would be the first African American governor of Florida.