An Undocumented Journey Through Harvey

When her trailer flooded, Maria and her children escaped on a makeshift raft. But with the risk of deportation, she didn’t know where to turn.

The water seeped in under the door of Maria’s mobile home in Houston Sunday night as she tapped out the numbers 9-1-1. No answer. “Just take the children and leave me,” her friend José urged in Spanish. Jose is paralyzed from the waist-down. Maria and her late husband took him in to live with them and their five children following his car accident six years ago. The water kept coming into the trailer. Now it crept towards Jose’s electric wheelchair.

“No—if we leave, we all leave together,” Maria told Jose. She was scared. She had called 911 three hours earlier and had been instructed to calm down and wait. So Maria waited, and waited, and now the water was coming in faster, and now there was more of it. Her children were crying.

As Maria began to panic, her friend’s husband, whom she had called earlier, showed up at her front door with his son and his two teenage friends. He pointed to the inflatable kiddie pool her family used during the hot Houston summer, and suggested they use it as a raft to push José through the floodwater. With José, her 9-year-old twin boys, and her 10-year-old daughter situated in the green and blue floating pool, the 5-foot-tall Maria pushed her family through frigid water that reached her chest. Maria’s other two daughters, just 11- and 12-years-old, walked alongside their mother in the dark. She wondered what would happen next. Both Maria and Jose are undocumented immigrants, and she feared being asked for papers once they reached a shelter.

Maria’s concern about potentially being detained by “la migra”—immigration officials—was one shared by many undocumented immigrants as Hurricane Harvey ravaged Houston and other parts of southern Texas. Pew estimates that the Houston metropolitan area is home to roughly 575,000 undocumented immigrants, the third largest population in the United States behind Los Angeles and New York. Even before the storm, the undocumented community was on high alert, due to Senate Bill 4, an anti-immigrant measure that allows local police officers to ask about a person’s citizenship status and had been scheduled to go into effect Friday. (It has since been temporarily halted.)

Houston is home to about 575,000 undocumented immigrants, the third largest population in the United States. Getty

The ICE and U.S. Customs and Border Protection put out a joint statement over the weekend in light of the storm saying they wouldn’t target undocumented immigrants at evacuation sites, shelters, or food banks. Houston Mayor Sylvester Turner went as far as saying he would personally defend any undocumented immigrants who faced deportation as a result of seeking help in the storm. These reassurances never reached Maria, and she almost didn’t go to a shelter due to her fear. (Esquire is withholding the last names of undocumented immigrants profiled in this article.)

Maria had walked for 75 minutes through the water towards an elementary school on higher ground. She brought a change of clothes and blankets with her from home that were now soaked. The kiddie pool was becoming so deflated it was tough to push. As her legs began to fatigue from wading through the water, a black truck splashed by and three men jumped out to assist Maria, Jose, and the rest of the group. The Good Samaritans drove the family to a nearby school and Maria contemplated where to go next. She tried to call acquaintances, but claims it was tough to find someone who would agree to house them once she mentioned José was paraplegic. The men who had been in the black truck offered to take them to Gallery Furniture, a Houston furniture store that had opened its doors as a shelter for hurricane evacuees.

“I was so scared,” she says in Spanish, the language in which our interview was conducted. “I was scared I would go there and they would ask me for my papers.”

Maria left Mexico when she was 20-years-old and has been living in Texas for the past 17 years. Her husband passed away from a stroke a year ago, and now she is terrified of being deported and leaving her five American-born children without parents. But the men in the truck reassured Maria and José nobody would ask for their documentation at Gallery Furniture. Desperate for food, water, and a place to sleep, Maria went to the furniture store, where the family was greeted with hot dogs, coffee, and a temporary wheelchair for José. Still, she was anxious.

There have been dozens of Hurricane Harvey-related deaths since it made landfall in Texas over the weekend. Getty

“I didn’t want to stay there,” she says. At 4 a.m., two police officers walked in, and her anxiety grew. The pair spoke with some of the volunteers at the shelter and walked into the kitchen. Nobody asked for papers.

Maria, Jose, and the children slept at the furniture store for one night before moving to a family member’s house, where they are currently living. Maria has since returned to her mobile home to assess the situation. The water has damaged two of her four bedrooms, plus a bathroom. Her two trucks are flooded, as well, one of which she uses to pull the taco food cart that she depends on for her livelihood. Maria, like approximately 80 percent of Harvey’s worst flood victims, does not have flood insurance.

“I know [undocumented] people have been afraid before the hurricane, of just dropping their kids at school or going to work,” says Pancho Arguelles, executive director at Living Hope Wheelchair Association, a non-profit organization that assists people like José with spinal cord injuries who don’t have access to healthcare. 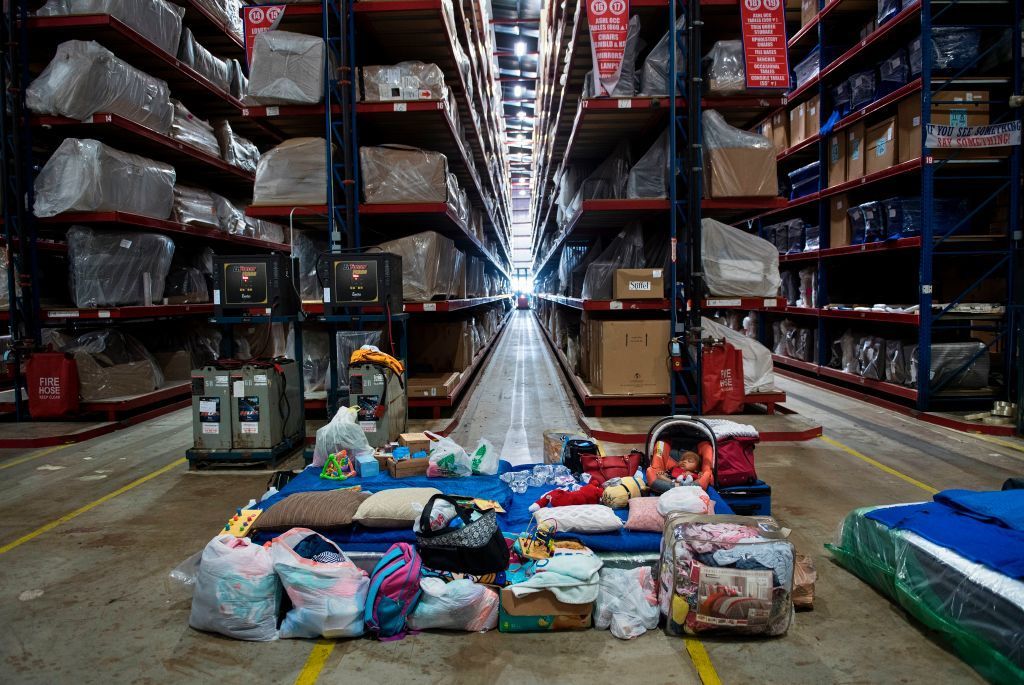 He worries about the new anti-immigrant bill, and says he thinks undocumented people will mistakenly think it means every police officer is essentially becoming an immigration officer. The deterioration of trust between police officers and the community they serve is of serious concern to police chiefs in Texas, many of whom have spoken out against Senate Bill 4 both before and after it was signed into law by Texas Gov. Greg Abbott. The legislation—nicknamed the “anti-sanctuary cities” law—would ban police chiefs, sheriffs, and other law-enforcement officials from preventing an officer from questioning a person about his or her immigration status. Jail officials would also be forced to honor all ICE requests to hold inmates for possible deportation. On Wednesday, a federal district judge temporarily blocked the bill from taking effect while a lawsuit against it continues. Houston is one of the cities involved in the lawsuit looking to strike down the law.

“I know [undocumented] people have been afraid before the hurricane, of just dropping their kids at school or going to work.”

Still, Maria feels uncertain about her future in the U.S. “I’m worried,” she says. Speaking on behalf of the undocumented community in Houston she says, “We have a lot of needs right now.” Maria hopes to move back into her damaged home and get her business back up and running as soon as she can.

“I will work hard and fight like always for my children,” she says. “I’m their only support.”