Why the Midwest’s Food System is Failing

The heavily agricultural states in the middle of the country aren’t actually feeding their people. But the 2018 Farm Bill offers an opportunity to change that. 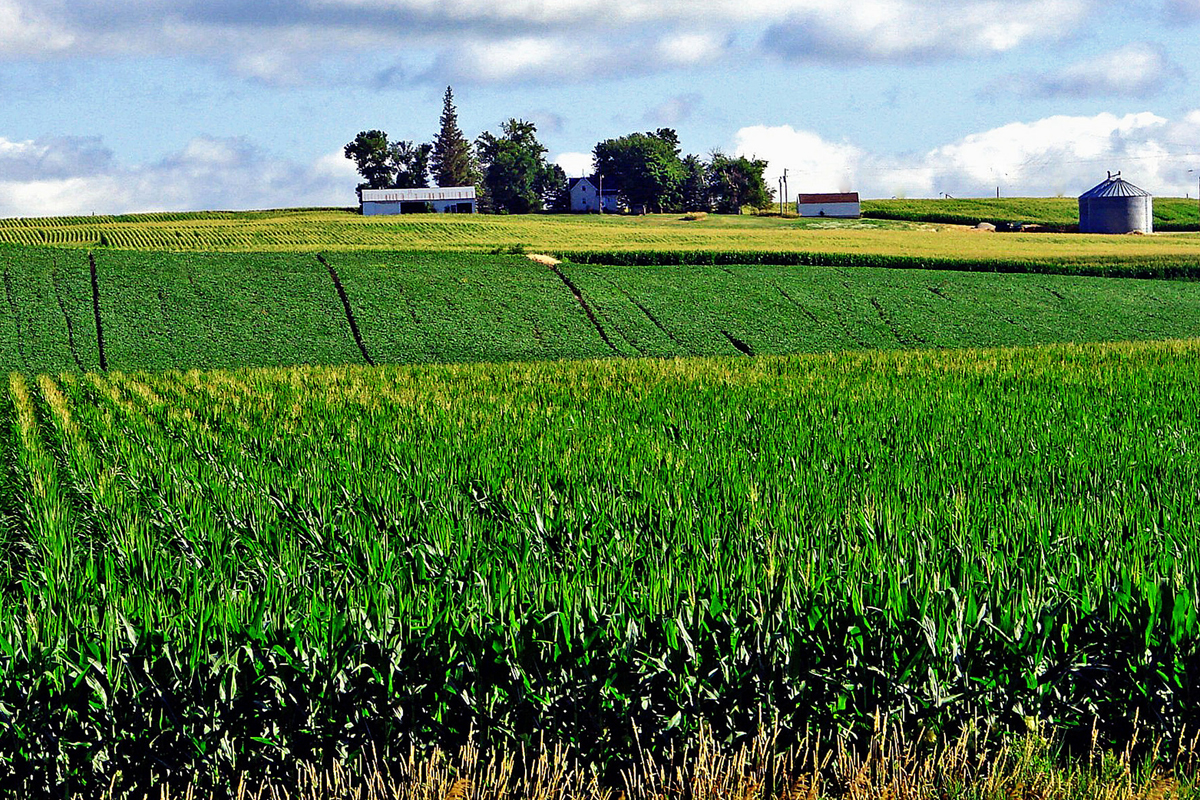 If you’ve perused the new 50-State Food System Scorecard from the Union of Concerned Scientists, you’ve probably noticed a seeming contradiction. As shown on the map below, the heavily agricultural states in the middle of the country aren’t exactly knocking it out of the park when it comes to the overall health and sustainability of their food and farming systems. On the contrary, most of the leading farm states of the Midwest reside in the basement of our overall ranking. 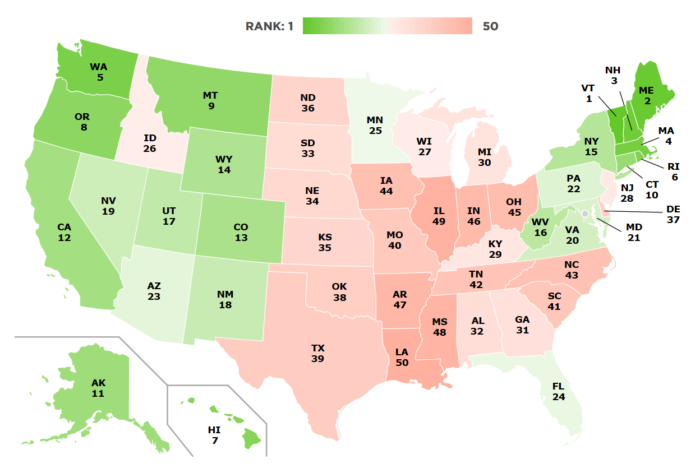 So what’s that about? A couple of reasons stand out to me.

First, much of what the Midwest grows today isn’t really food (much less healthy food). 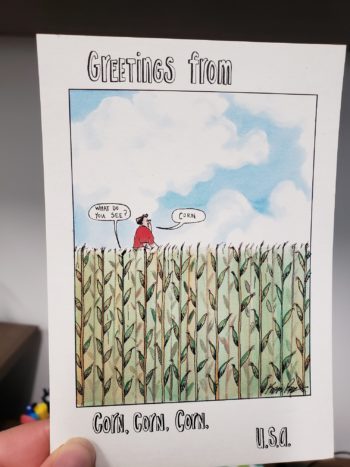 It’s true. While we often hear that the region’s farmers are feeding America and the world, in fact much of the Midwest’s farm output today is comprised of just two crops: corn and soybeans. There are various reasons for that, including some problematic food and farm polices, but that’s the reality.

Take the state of Indiana, for example. When I arrived there in 1992 for graduate school (go Hoosiers!), I bought the postcard at right. That year, Indiana farmers had planted 6.1 million acres of corn, followed by 4.55 million acres of soybeans. Together, the two crops covered more than two-thirds of the state’s total farm acres that year.

The situation remains much the same today, except that the crops have switched places: this year, Indiana farmers planted 6.2 million acres of soybeans and “just” 5.1 million acres of corn. Nationwide, soybean acreage will top corn in 2018 for the first time in 35 years.

Regardless of whether corn or soy reigns supreme, the fact is that most of it isn’t destined for our plates. Today, much of the corn goes into our gas tanks. The chart below shows how total U.S. corn production tracked the commodity’s use for ethanol from 1986 to 2016:

Although U.S. corn is a highly productive crop, with typical yields between 140 and 160 bushels per acre, the resulting delivery of food by the corn system is far lower. Today’s corn crop is mainly used for biofuels (roughly 40 percent of U.S. corn is used for ethanol) and as animal feed (roughly 36 percent of U.S. corn, plus distillers grains left over from ethanol production, is fed to cattle, pigs and chickens). Much of the rest is exported.  Only a tiny fraction of the national corn crop is directly used for food for Americans, much of that for high-fructose corn syrup.

All this is a big part of why, when UCS assessed the extent to which each U.S. state is producing food that can contribute to healthy diets—using measures including percentage of cropland in fruits and vegetables, percentage of cropland in the top three crops (where a higher number means lower diversity), percentage of principal crop acres used for major animal feed and fuel crops, and meat production and large feeding operations per farm acres—we arrived at this map: 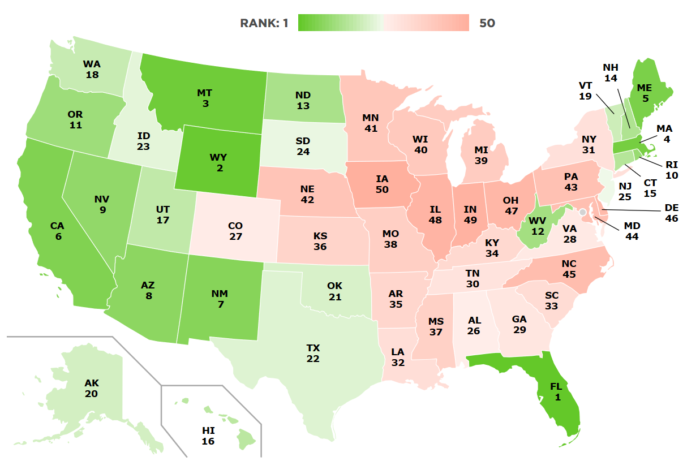 As you can see, the bottom of our scorecard’s “food produced” ranking is dominated by Midwestern states. This includes the nation’s top corn-producing states—Iowa (#50) and Illinois (#48), which together account for about one-third of the entire U.S. crop. It also includes my one-time home, Indiana (#49), where just 0.2 percent of the state’s 14.7 million farm acres was dedicated to vegetables, fruits/nuts, and berries in 2012.

Now let’s switch gears to look at another reason the Midwest performs so poorly overall in our scorecard.

Today’s Midwest agriculture tends to work against nature, not with it.

In addition to the fact that the Midwest currently produces primarily non-food and processed food crops, there’s also a big problem with the way it typically produces those commodities. Again, for a number of reasons—including the shape of federal farm subsidies—the agricultural landscape in states such as Iowa, Illinois, and Indiana is dominated by monoculture (a single crop planted year after year) or a slightly better two-crop rotation (you guessed it, corn and soybeans).

These oversimplified farm ecosystems, combined with the common practice of plowing (AKA tilling) the soil before each planting, degrade the soil and require large applications of fertilizer, much of which runs off farm fields to pollute lakes and streams. Lack of crop diversity also leads to more insect pests, increasing the need for pesticides. Moreover, as corn is increasingly grown in dry pockets of the Midwest such as Kansas and Nebraska, it requires ever-larger quantities of irrigation water. Finally, the whole system relies heavily on fossil fuels to run tilling, planting, spraying, and harvesting equipment.

No wonder that whether we look at resource reliance (including use of commercial fertilizers and chemical pesticides, irrigation, and fuel use) or, conversely, implementation of more sustainable practices (reduced tillage, cover crops, and organic practices, among others), most Midwest states once again lag. 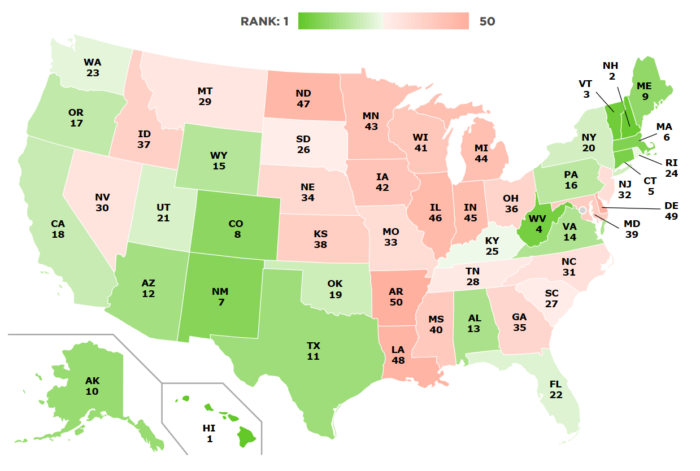 RANKINGS BY USE OF CONSERVATION PRACTICES 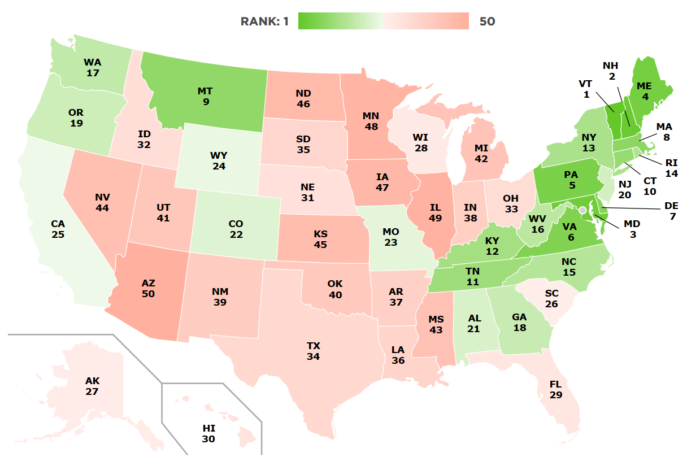 But Midwestern farmers want to change the map.

To sum up: In general, the Midwest is using up a variety of limited resources and farming in ways that degrade its soil and water, while falling far short of producing the variety of foods we need for healthy diets. Not a great system. But there are hopeful signs that the region may be starting to change course.

For example, in Iowa, more and more farmers are expanding their crop rotations to add oats or other small grains, which research has shown aids in regenerating soils, improving soil health, and delivering clean water, while also increasing productivity and maintaining profits. Diversifying crops in the field can also help to diversify our food supply and improve nutrition.

Back in my alma mater state of Indiana, farmers planted 970,000 acres of cover crops in 2017—making these soil protectors the third-most planted crop in the state. And in a surprising turn of events just last week, Ohio’s Republican governor signed an executive order that will require farmers in eight Northwest Ohio watersheds to take steps to curb runoff that contributes to a recurring problem of toxic algae in Lake Erie that hurts recreation and poisons Toledo’s drinking water.

A recent UCS poll provides additional evidence that farmers across the region are looking for change. Earlier this year, we asked more than 2,800 farmers across the partisan divide in seven states (Iowa, Illinois, Kansas, Michigan, Ohio, Pennsylvania, and Wisconsin) about federal farm policies that today incentivize the Midwest agricultural status quo. Nearly three-quarters of respondents indicated they are looking for a farm bill that prioritizes soil and water conservation, while 69 percent supported policies (like farm-to-school supports) that help farmers grow more real food for local consumption. More than 70 percent even said they’d be more likely to back a candidate for public office who favors such priorities.

Speaking of the farm bill, things are coming to a head in Congress this summer over that $1 trillion legislative package that affects all aspects of our food system. As the clock ticks toward a September 30 deadline, the shape of the next farm bill is in question, with drastically different proposals passed by the House and the Senate. Critically important programs—including investments that could help farmers in the Midwest and elsewhere produce more healthy food and farm more sustainably—are at risk.

This article originally appeared on the Union of Concerned Scientists blog, and is reprinted with permission.