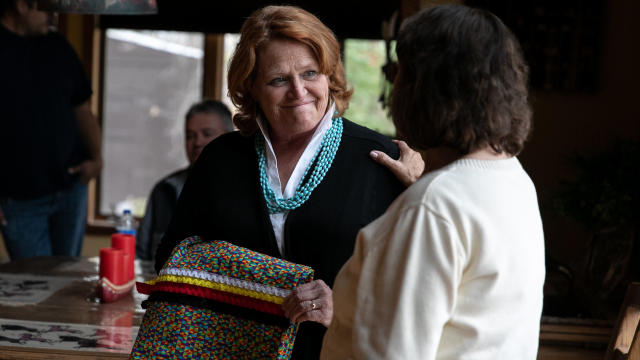 TURTLE MOUNTAIN INDIAN RESERVATION, N.D. — Two days after she cast the vote that could both define and end her political career, Heidi Heitkamp was back home in North Dakota, and near tears.

On this reservation near the Canadian border on Monday, far from the drama of Washington, the women of the Turtle Mountain Band of Chippewa Indians had a gift for the Democratic senator.

A ribbon skirt, decorated with the colors of the rainbow, was meant to tell her grey skies would soon pass.

“This is for everything you’ve done for us,” said tribal member Cathie Gladue, presenting her with the skirt as Heitkamp began to tear up. “And it’s especially for the stand you’ve recently taken. It was an honorable stand for all women, of all colors.”

The stand she took — choosing to believe Christine Blasey Ford, the woman who accused Brett Kavanaugh of sexually assaulting her when both were teenagers, and to dismiss the then-Supreme Court nominee’s angry denials — is one Heitkamp and almost all of her supporters acknowledge has put her political career in jeopardy.

Running for re-election against Republican GOP Rep. Kevin Cramer in a state President Donald Trump won by roughly 36 percentage points, Heitkamp already was seen by analysts as the senator most likely to lose re-election. And  Republicans now crow that her vote last week against Kavanaugh’s confirmation signed her political death warrant.

Some public polling has shown her down double digits. Democrats insist the margin is much closer.

A Heitkamp loss harms an already tough path for Democrats to a Senate majority; it likely means they need to sweep GOP-held seats in Nevada, Arizona and Tennessee to have a chance of winning Congress’ upper chamber. In the wake of the battle over Kavanaugh, Republican Senate candidates in red-leaning territory are running on a backlash to the Me Too movement, hoping it can expand the GOP’s 51-49 majority in the Senate.

Heitkamp knows she’s an underdog. And so, in an frequently emotional 48 hours after she cast the vote, as she traveled to a farm-town parade, a small-dollar fundraiser near her hometown, a panel in front of energy executives in Bismarck and finally up to this reservation, her supporters worked relentlessly to buoy the senator’s spirits, as she simultaneously tried to defend and move past her vote against Kavanaugh. 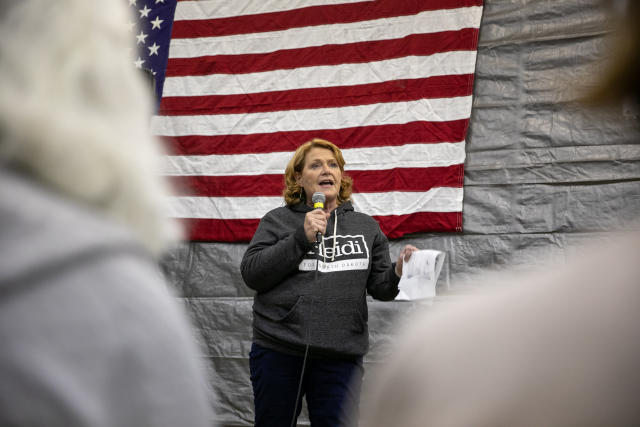 It was a vote Heitkamp, a moderate former state attorney general who grew up in a town so small her seven-member family made up one-tenth of the population, made clear was directly related to Ford’s Senate committee testimony that she was “100 percent certain” it was Kavanaugh who assaulted her and to Kavanaugh’s angry, partisan testimony in response.

“First and foremost, I believed her,” Heitkamp told the crowd of about 250 who gathered at a garage to eat bratwursts, drink beer and snack on homemade desserts at the Oktoberfest-themed small-dollar fundraiser in Wyndmere. “And I think it was really, really important for our future that we believe her.”

“This has been a tough week for me,” Heitkamp said. “The political rhetoric is, ‘You can’t vote that way if you expect to come back.’ And I tell people, Ray and Doreen Heitkamp didn’t raise me to vote a certain way so that I could win. They raised me to vote the right way.”

The crowd responded with a standing ovation.

Asked if she was planning on supporting Kavanaugh before the Senate Judiciary Committee’s Sept. 27 hearing, Heitkamp delivered a one-word response: “Yep.” But she said supporting him after Ford’s testimony would’ve been a betrayal of her long-time supporters.

“It’s beyond Kavanaugh himself,” Heitkamp said in an interview in the back seat of a campaign staffer’s SUV. “It’s an affirmation of why they support me. People say politics is local. In North Dakota, politics is personal.”

That was on display Sunday night in Wyndmere, where Heitkamp seemed to know every attendee on a first-name basis. The crowd, filled with farmers furious over the Trump administration’s trade war, was hopeful but not optimistic the rest of the state’s voters would side with her. 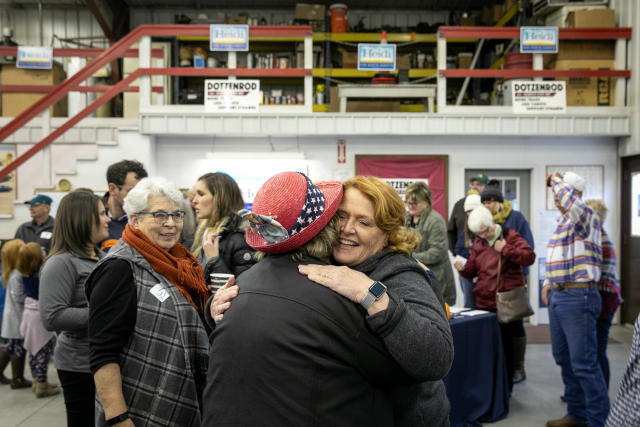 “What drives people’s votes is whether you have an R or a D next to your name,” said Gary Friskan, a soybean, wheat and corn farmer. “This is a red state.”

Still, he hoped Heitkamp’s “middle of the road” style would appeal more to voters than Cramer’s loyalty to Trump. (The congressman once compared voting against Trump to sleeping with women other than his wife.)

“The commercials for her opponent keep trying to turn her into [Hillary Clinton]. Baloney!” he scoffed.

Friskan said he and other soybean farmers had lost tens of thousands of dollars because of the trade war, and were worried about losing customers in China and elsewhere permanently if it continued. Heitkamp’s fight against the trade war had been a key part of her message, but she’s now airing television ads defending her vote against Kavanaugh instead.

“I voted for Neil Gorsuch,” Heitkamp says in the 30-second spot, referring to Trump Supreme Court pick confirmed last year. “So I know there are plenty of other conservative judges who can fill this job without tearing this country apart.”

Heitkamp also has engaged in a mini-media blitz, appearing on CBS’ “60 Minutes” and CNN to explain her opposition to Kavanaugh and has become an unlikely online fundraising superstar, bringing in at least $1 million in the days following her vote.

The fight over Kavanaugh intensified the spotlight on her race — reporters from at least three national outlets were at the fundraiser in Wyndmere.

She admits a victory in the Nov. 6 election would be of the come-from-behind variety. To try to make that happen, she said her campaign is focused on identifying and turning out 150,000 to 160,000 supporters (she won her first term in 2012 with just over 161,000 votes).

Republicans, meanwhile, say no amount of money or campaigning can save Heitkamp.

“No matter how much she tries to run to the middle, she can’t escape the left-wing resisters and black-masked antifa activists that now define the Democrat Party to much of middle-America,” said Andrew Surabian, a GOP strategist and former Trump White House official. “The overreach from national Democrats during the Kavanaugh fight was simply the last straw. She is a walking dead candidate at this point.” 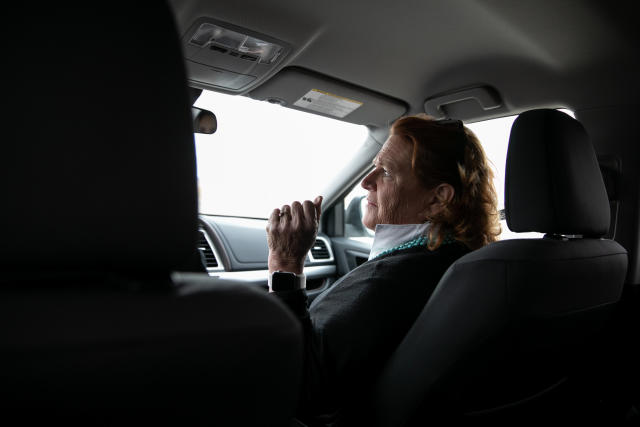 Heitkamp, 62. started her Monday in the state capital of Bismarck, sharing a stage with Cramer at the conference on energy production, a key subject in the state. She told the crowd her bipartisan approach to energy issues would make her more effective for the state than Cramer.

The 57-year-old Republican sought to keep the focus on Kavanugh, saying the newly minted Supreme Court justice would be good for energy production.

As Heitkamp traveled on to the Chippewa reservation, the Kavanaugh vote was far from her mind.

She met with tribal leaders at the Sky Dancer casinos, where the front doors were still plastered with fliers advertising a rally with Heitkamp that had been set for Saturday; it was canceled because she was still in Washington voting against Kavanaugh’s nomination. She visited the house of Twila Martin Kekahbah, a former tribal chief, and discussed the unemployment, housing, drug addiction and crime problems on the reservation.

She went to the local community college, where a group of tribal leaders was educating voters on how to grapple with a North Dakota law that requires voters to present IDs with residential street addresses. Many tribal members use P.O. boxes instead. Heitkamp and many other Democrats believe the law was passed in response to her 2012 win, when tribal members played a key role in propelling her to an upset over then-Rep. Rick Berg.

At the college, she delivered a modified version of her stump speech, tearing into Cramer as someone “with a fundamental lack of understanding on tribal issues.”

It’s part of a harsher line she’s taken on him in recent weeks, prompted in part by Cramer’s own questionable comments throughout the debate on Kavanaugh. Cramer, in a recent interview with The New York Times, seemed to disparage the Me Too movement that promotes solidarity among sexual assault victims. He called it a “movement toward victimization” that the female members of his own family can’t relate to.

His comments sparked an emotional response from Heitkamp, including her decision to reveal to the New York Times that her mother was a victim of sexual assault.

Cramer’s campaign didn’t respond to a HuffPost email requesting a comment, but a North Dakota GOP spokesman referred to the candidate’s comments on Tuesday to The Forum of Fargo-Moorhead. Cramer told that news outlet that Heitkamp’s response showed she was “unhinged” and that the Me Too movement had been “weaponized … for political purposes at the expense of victims.” 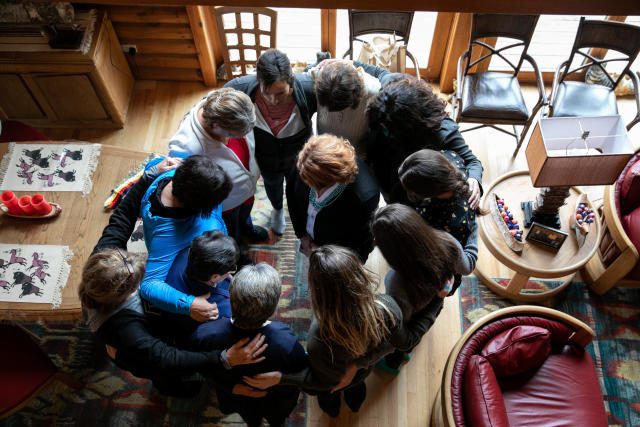 Empathy was a subject Heitkamp returned to again and again as she campaigned over the last few days. She mentioned it in her speech in Wyndmere, in the HuffPost interview and during her time on the reservation.

“We’ve lost the ability to be empathetic,” she said at Kekahbah’s house. “And our nation is divided.”

A few minutes later, the women at the gathering formed a circle around Heitkamp. “We’re going to just enclose her, and give her all the power we can,” Kekahbah said.

Then, she whispered a prayer.