In these perilous times, progressives must create narratives that shine a light on crises such as climate change and the plight of refugee 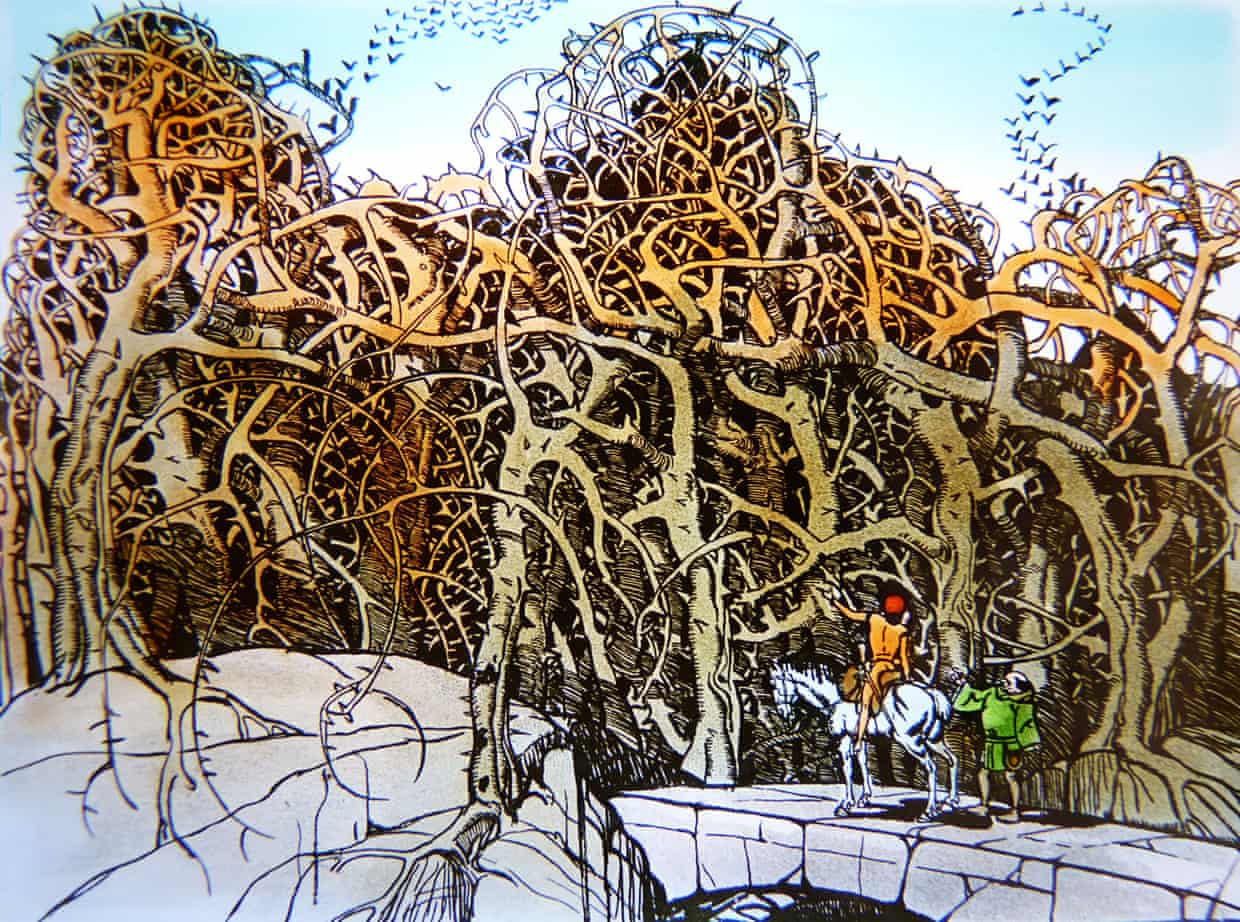 Illustration from a Brothers Grimm Snow White fairy-tale, circa 1900 ‘Our daily lives seems to have become as dark and disturbing as anything dreamed up by the brothers Grimm.’ Photograph: INTERFOTO / Alamy/Alamy

With natural forces running amok and wolves prowling in the shady woods of our workplaces, reality seems stranger than a folk tale or fairy story. Our daily lives seem to have become as dark and disturbing as anything dreamed up by the brothers Grimm, or written down by Charles Perrault, the great 17th-century chronicler of folk and fairytales.

Folk tales emerge in times of upheaval, and from societies’ grimmest moments. They enable us to process and assimilate extreme experience, and deal with our fears. They also, typically, communicate powerful and uncompromising moral narratives. It’s not hard to draw a map of current major global problems with reference to them.

The most powerful kingdom in the world, for example, falls into the hands of a ruler who is equal parts the insatiable, comfortless greed of Midas, and the vanity of Narcissus, who disdains those who love him, and the self-delusions of the naked emperor. Remind you of anyone?

And just as it may be the season of flamboyant, escapist horror, it can be frightening when we discover that places we thought, or trusted to be safe, turn out to be concealing predators. Almost daily at the moment, another male impresario or figure with other power is revealed as the wolf that befriends with an ulterior motive the young and vulnerable, or perhaps the charming vampire seeking to satisfy its lust.

This, of course, is one of the other functions of folk tales – they are cautionary and teach us to identify risks. Across cultures you will find stories designed to keep us away from danger, with many applicable to a warming world.

The kelpies of Scottish folklore carried children to watery graves, while the Inuit told tales of the Qallupilluit, who lived beneath the ice and would steal children through its melting cracks.

One of our greatest contemporary threats is our wholesale abuse of the natural world. Seas are polluted with plastic and acidifying, the atmosphere loaded with more carbon dioxide than human civilization has ever experienced, and a mass extinction event underway, visible recently in the large-scale die-off of insect life. Folk tales are a guide to the consequences of such short-sighted self-centeredness.

King Canute was the monarch who vainly tried to command the seas not to rise. In fact Canute was demonstrating the opposite to his courtiers, the ultimate limits of kingly power and humankind’s attempts to command nature.

And the story of killing the goose that lays the golden egg in order to extract its riches, and finding nothing, stands as a parable for how we over-exploit the environment everywhere from our seas, to our forests, farms, fossil fuel extraction and more.

Folk tales and myths are especially strong on hubris, with the tale of Icarus and Daedalus sharply dividing Icarus, who fails to accept the limits of the material world, overreaches and crashes, from the wiser Daedalus, who still manages to fly, but not too near the sun. Icarus strikes a Richard Branson-like figure, or the head of an oil company still exploring for oil we cannot afford to burn. Daedalus is the smart entrepreneur switching to wind and solar power.

So much accumulated wisdom in tales mocks our multiple current follies. But that is partly because, in campaigning for change, the art of storytelling has been too often replaced with reliance on a deluge of facts and polices.

Progressives have learned the hard way in an age of Brexit and Trump that it is messages that resonate with mythologies – such as “making America great again” tapping the former frontier optimism of nation-builders, or “taking back control” for the brave, resilient island – are impervious to fact and rational argument. In both you might also glimpse the village whipped up by the charismatic trickster who appears in its midst, into a fury of self-destructive suspicion and isolation. If you want change to happen, you have to change deeply embedded cultural narratives.

Progressive politics needs better stories as much as it needs facts and policies. Without them it will flail and flounder. That’s why a group of leading scientists, economists and ecologists recently put facts momentarily to one side, and wrote modern folk tales for troubling times in an experiment to communicate issues of concern more compellingly.

In Knock Twice, the resulting collection, one of the world’s leading authorities on climate and geo-hazards, Bill McGuire, weaves a story of refugees from rising sea levels slipping through immigration controls. Jayati Ghosh, one of India’s leading economists, who has written about women’s extreme inequality in the labor market, spins a tale about a young woman, Chitrangada, who rejects the role assigned for her. Bluebeard & Partners by Anthea Lawson, a leading authority on corporate corruption, exposes a world of tax avoiding shell companies. They are joined by the former head of a cabinet office inquiry into public services, with an unusual re-reading of Puss-in-Boots, and the head of a UN inquiry into designing a sustainable financial system imagining an all-powerful phone app.

Most tales, at some level, present a rite of passage through difficulty to maturity, awareness or resolution. Now, more than ever, it feels like we need new tales to lead us through our troubling times.