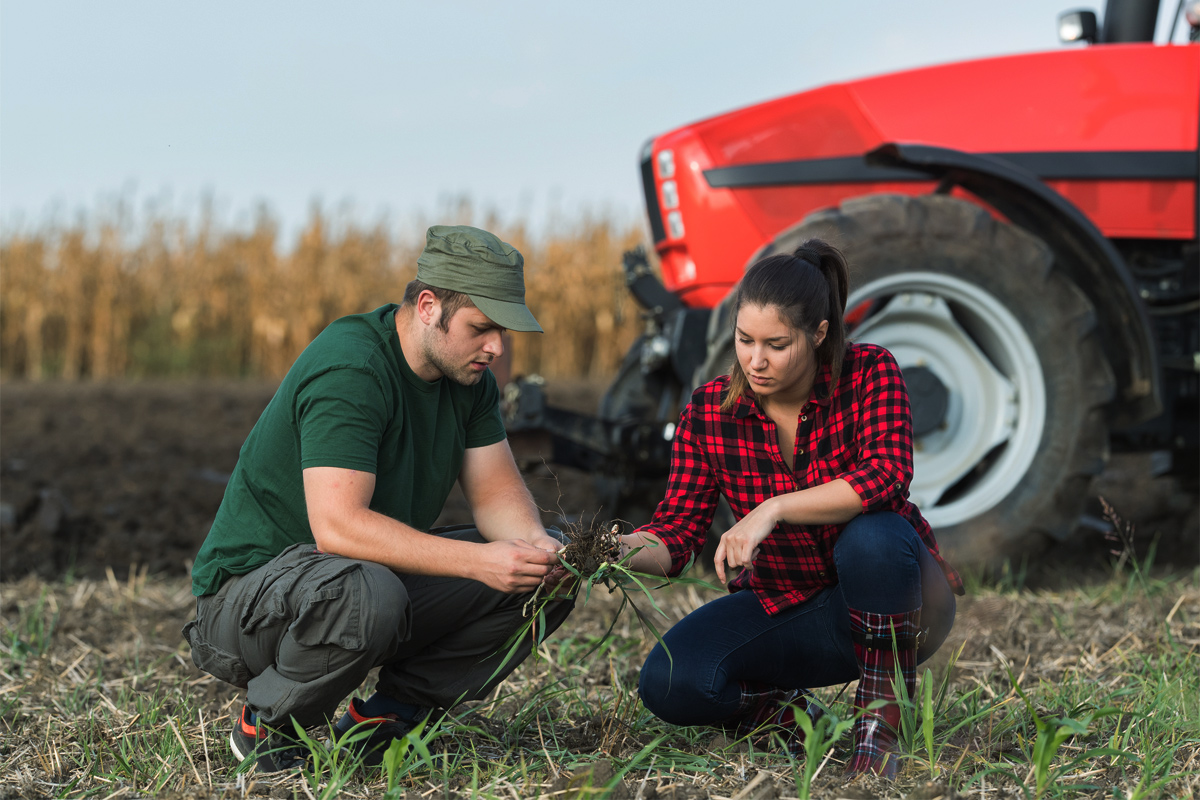 Most farmers know that the health of their soil is important, but they don’t all prioritize it over, say, maximizing what they grow each year. Now, some scientists are looking into ways to ensure that more farmers—especially those producing commodity crops in the middle of the country—start taking soil seriously.

The world’s biggest crop insurance program, the U.S. Federal Crop Insurance Program (FCIP) provides coverage to help farmers recover from “severe weather and bad years of production.” But recently, a pair of Cornell University scientists looked at what might happen if crop insurance were also tied to soil quality—that is, if insurance companies began considering soil data when determining rates.

In a new paper, Cornell University assistant professor of agricultural business and finance Joshua Woodard and post-doctoral research assistant Leslie Verteramo Chiu argue that tying the Crop Insurance Program to the health of a farm’s soil could make it a powerful tool for promoting more sustainable and resilient farming. Including soil data in crop insurance criteria, they write, would “open the door to improving conservation outcomes” and help farmers better manage risks to food security and from climate change.

Or, as Paul Wolfe, National Sustainable Agriculture Coalition (NSAC) senior policy specialist, explained, “The big picture is that crop insurance could be a great way to incentivize conservation, but it isn’t now.”

What is the FCIP and why are its policies so influential? The program began in the 1930s to help farmers recover from the devastating losses of the Dust Bowl and the Great Depression. Now it covers everything from drought-related crop losses to dips in revenue.

About 900,000 farmers participate in the program, which currently covers about 90 percent of “insurable” U.S. farmland—more than 298 million acres in 2015—with policies worth about $100 billion annually. And it covers more than 100 different crops. The program is a public-private partnership managed by the Federal Crop Insurance Corporation, which has been administered by the U.S. Department of Agriculture’s (USDA) Risk Management Agency (RMA) since 1996. The USDA sets insurance rates and authorizes which private insurance companies can sell policies; the costs of premiums are subsidized by the federal government to the tune of $0.62 per $1. It’s the largest direct subsidy program to domestic commercial agriculture and currently costs U.S. taxpayers about $10 billion annually.

The USDA itself has said that, “Improving the health of our Nation’s soil is one of the most important conservation endeavors of our time.” Healthy soil is also key to helping farmers manage the extreme weather—including droughts and floods—that comes with climate change.

But as it stands, the FCIP bases premiums on what a farm produces from year to year, without considering the conditions—such as soil quality—that influence those yields. “Crop insurance doesn’t really look beyond what you do in a single year,” said NSAC’s Wolfe. “Its goal is a very short-term effort based on the maximum a farmer can produce in one year,” he explained. “In some ways it discourages conservation practices with its extreme short-term view.”

This means that a farmer who puts in a cover crop to rebuild its soil capacity could end up paying more in premiums if that practice reduced his or her annual yield. Similarly, a farmer who puts marginal land into production to increase yields while increasing erosion or runoff would not pay a price for those impacts.

As Woodard writes, including soil type and quality information in setting crop insurance rates would be “a first step toward creating a crop insurance system” that could improve agricultural sustainability and “improve conservation outcomes.” But without this information, the program doesn’t provide any incentive for farmers to adopt practices that would, for example, increase soil water retention or increase soils’ organic matter—potentially increasing long-term productivity.

If soil data were part of crop insurance, it could also reduce the agricultural runoff now causing damaging algae blooms in the Great Lakes, Chesapeake Bay, and Gulf of Mexico, said Wolfe. And it would do so “with a carrot, not a stick.”

“As a farmer, I have always resented that the price my neighbors—who don’t do a good job with conservation—pay is the same as what someone who does practice conservation [pays],” said Bruce Knight, principal of Strategic Conservation Solutions and former chief of the USDA’s Natural Resources Conservation Services, who raises calves, corn, soybeans—and some years, wheat, sunflowers, and alfalfa—in South Dakota.

“We’re now subsidizing riskier operations the same as less risky ones, Knight explained. Getting information about soil “incorporated into crop insurance will completely revolutionize how that works and revolutionize taxpayers’ role as well,” he added.

Critics of the current program, including the Environmental Working Group, contend that crop insurance policies actually encourage—and subsidize—poor farming practices and could lead to another Dust Bowl in regions hardest hit by drought and heat.

Challenges of Transforming the Farm Landscape

Of course, changing the farm landscape won’t be as easy as some might hope. “Every farmer knows that … improving soil health reduces risk,” explained Meridian Institute senior partner Todd Barker. “But to effect change in the crop insurance program you have to prove without a doubt, in a data-intensive way, that there’s a correlation between A and B. Insurance companies require that level of detail.”

Through its AGree program, the nonprofit Meridian has been working with academic researchers like Woodard, farmers, conservation groups, and former USDA leaders to develop ways to incorporate soil data into the FCIP.

Linking crop insurance premium subsidies to soil data and measures of soil health would be the equivalent of a safe-driver discount on auto insurance, Wolfe explained. It would reward better practices. But getting the USDA to make such a move won’t be easy. After all, the FCIP has been in place for nearly 80 years and linking crop insurance to soil data would require changes to the Farm Bill—and would require the USDA to share information about crop yields that aren’t now readily available.

“There are some people out there who don’t want to change at all,” says Wolfe. “But a lot of people, if provided the right sort of encouragement and incentives, would be moving the needle on reducing runoff, reducing soil loss, and improving water quality.”

It’s tough to say whether any of this will come to pass in the short term. FCIP changes are expected to come under discussion as the 2018 Farm Bill is debated. But, so far, the agriculture committees mainly appear interested in reducing premium subsidies for the wealthiest farmers and insurance payouts based on inflated post-disaster harvest prices.

Newly sworn-in Secretary of Agriculture Sonny Perdue has voiced support for the crop insurance program. Yet his stance on soil protection and increase resiliency to climate change remains unclear, especially given his past dismissal of climate change science and his investments in companies that sell agricultural chemicals, including fertilizer. Still, Woodard’s paper lays the groundwork to show that if and when the USDA is ready to make a move, soil quality data could play a key role in transforming crop insurance for the better.