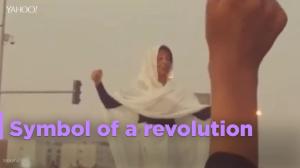 A photograph of a woman leading a protest chant has come to symbolize the Sudan Uprising.

The photo, taken by photographer Lana Haroun, is said to summarize “this moment we have been waiting for for the past 30 years.”

Several news outlets have identified the woman as Alaa Salah, a 22-year-old engineering and architecture student.

The image features Salah standing on top of a car with her finger pointed towards the sky, surrounded by dozens of people recording on their phones.

Accompanying video footage shows her chanting a poem that translates to: “The bullet doesn’t kill. What kills is the silence of people”, according to a tweet from Africa Digest.

It has achieved viral status, gaining tens of thousands of likes and retweets since it was posted earlier this week.People on Twitter have praised the image for its powerful depiction of the woman.Others have suggested the now-iconic image will make history books one day.“I’m very glad that my photo let people around the world know about the revolution in Sudan,” Salah told The Guardian about her viral fame.

“Since the beginning of the uprising I have been going out every day and participating in the demonstrations because my parents raised me to love our home.”

“The day they took the photo, I went to 10 different gatherings and read a revolutionary poem. It makes people very enthusiastic. In the beginning I found a group of about six women and I started singing, and they started singing with me, then the gathering became really big.”

Hind Makki, an interfaith educator, has revealed there’s even more than meets the eye to this image in a Twitter thread, where she spoke about the rich symbolism of her outfit.She also spoke of the significance of women-led protests in the country.Last Saturday, tens of thousands of demonstrators took to the street in Kartoum, Sudan, to mark the 100th day of the protest movement against President Omar al-Bashir’s 30-year-long regime.

More than 3,000 people have been arrested since the protests began last December, according to CNN. While estimates vary, it is believed there have been between 32 and 78 fatalities during this period, according to the broadcaster.

Salah’s symbolic status is reminiscent of how a video of Neda-Aghar Soltan, who was shot dead at the age of 26 during the Iranian election protests, became iconic among protesters. 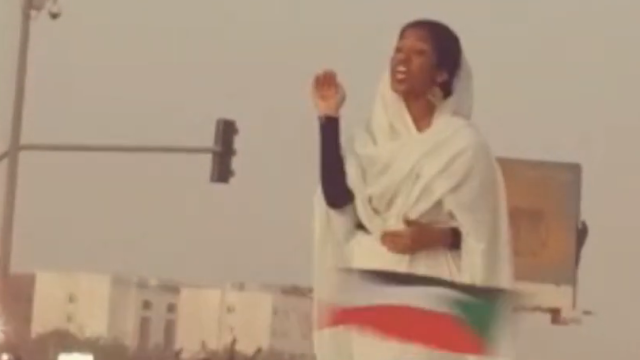 A Sudanese woman rallied protesters outside the military headquarters in Khartoum on April 8, social media users reported.The image of the woman was widely shared by social media users in Sudan, who dubbed the woman ‘Kandake,’ according to the New Arab. Kandake is the title of ancient queens of the Kingdom of Kush and has been used as a historical symbol of Sudanese women, local media reported.Anti-government protests began across Sudan in December amid food shortages and rising prices. The demonstrations have been frequently marked by violence as security forces used live ammunition and tear gas to crack down on demonstrators. This footage shows the woman leading a chant in Khartoum on Sunday. Credit: Anonymous via Storyful.