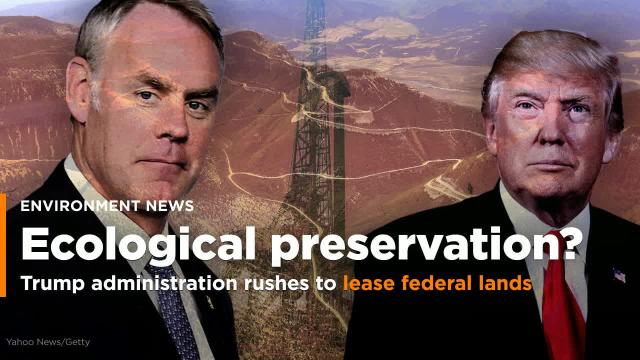 WASHINGTON — The Department of Interior is quietly preparing to offer hundreds of thousands of acres of public land for leasing to energy companies, a move critics have charged is being undertaken with minimal public input and little consideration for ecological and cultural preservation.

According to data compiled by environmental groups, the Bureau of Land Management will put 2.9 million acres up for potential leasing in the next four months. Because the land in question — in states including New Mexico, Colorado and Arizona — lacks designation as a national park or monument, it can be used for commercial purposes such as mining for minerals and drilling for oil and gas. Supporters say that bolstering the extractive industries will ensure energy independence for the United States, though shifting energy preferences and falling oil prices appear to undermine that assertion.

The Bureau of Land Management is part of the Department of the Interior, which is today headed by Ryan Zinke, a Montana native who has styled himself a rugged conservationist, even as he maintains close ties to private enterprise. Many of his closest advisers at Interior have ties to the oil and gas industry, either as lobbyists or executives. His top deputy, for example, is David L. Bernhardt, a veteran Republican operative who has also lobbied on behalf of California agribusiness.

Leasing land was a common practice before Trump. What’s different now, detractors say, is that the Bureau of Land Management is moving with uncommon speed to make improper determinations without allowing public to comment. That has led, these critics say, to widespread damage to the environment of the American West.

“We can’t just get it back,” says Nada Culver, a leader in the Wilderness Society’s land-use division. “Mistakes are made when you’re rushing.”

Those numbers, however, do not tell the full story. Less important than the amount of land offered, conservationists say, is where those parcels are located, as well as their significance as either natural resources or cultural landmarks. In this, too, the Obama administration appears to have been significantly more successful than its successor. In 2012, for example, only 17 percent of the parcels offered by the Obama administration were “protested” by the public (those figures are for fiscal years, where as the compilation of acres offered is for calendar years; the two correlate closely, if not exactly). Conversely, of the parcels offered in 2017, a full 88 percent were contested, suggesting the Trump administration has been largely indiscriminate in the land it is offering.

An even higher percentage of lands could be contested this year, given how close they are to protected areas in some of the country’s most rugged, cherished regions. The greatest share of offerings are in Wyoming, where about 1.1 million acres are being offered for lease. There were also 721,705 acres offered in Nevada, 329,826 in Utah and 230,944 in Colorado, along with smaller parcels in New Mexico, Montana and Arizona. Some of these are near national monuments and national parks, including Petrified Forest National Park in Arizona, Canyonlands National Park in Utah and Dinosaur National Monument in Colorado.

Many of the lands also represent habitat of the sage grouse, a bird whose native habitat is the high desert of the West. The sage grouse’s numbers have been drastically diminished by commercial and residential development.

President Obama considered protecting the grouse under the Endangered Species Act. Similar protection for the spotted owl in 1990 had laid waste to many a logger’s plans. Instead, in 2015, his Interior Department struck a deal with Western states. The sage grouse remained off the endangered species list, but there were 98 separate plans across the region to protect the bird —and, just as importantly, the landscape it lived on.

Zinke ordered those plans reviewed in the fall of 2018, indicating that he was preparing to offer some of the land set aside for sage grouse to energy or mineral-extraction companies. It’s unlikely that Zinke had personal animosity towards the bird. Rather, the sage grouse stands in the way of greater development of open lands across the West.

Aware that leasing land across the West could prove highly unpopular, the bureau canceled a 30-day comment period on any proposed lease, and the time to appeal a proposed lease already in the works was reduced to a mere 10 days. During the Obama administration, the total time for both comment and appeal had been 60 days.

“Were operating under a new guidance that has radically cut out opportunities for public input,” says Culver of the Wilderness Society.

Not only that, but Interior officials who worked in parks and national monuments were pressured to make land available for leasing, even when it was clear that studding that land with oil derricks and mining equipment would destroy the landscape and drive away the millions of tourists, both foreign and domestic, who came to see it each year.

“Why in the world, for a short-term gain, would you jeopardize those places by doing something stupid?” wonders Walt Dabney, who served as a park ranger for many decades and is now retired and living in Utah. He says that Moab, Utah, where he lives, is full of tourists and that French and Mandarin are commonly heard in local stores. The tourists bring millions to the local economy, and they “don’t boom-bust like the oil and gas business.”

Energy-related development will drive them away, according to Dabney, who says he’s not against energy. He is only against doing things quickly, and without consideration.

Among those challenging the Bureau of Land Management lease offerings is Conservatives for Responsible Stewardship, a group whose members lean red — and green. Its president, David Jenkins, has called for 117,000 acres across five states to be set aside by Interior. “It certainly makes no sense to lock up these important public resources,” Jenkins said, since the “oil and gas industry has shown no interest in them,” a reference to the tepid response to 2017’s offerings. The fear, of course, is that the non-Alaska offerings of 2018 will be more enthusiastically received.

Legislators and conservationists have had little recourse but to prepare for the next round of BLM offerings. The two Democratic U.S. Senators from New Mexico, Tom Udall and Martin Heinrich, have introduced legislation that would prevent leasing within 10 miles of of the Chaco Culture National Historical Park. Previous administration had informally honored such a buffer; the Trump administration does not.

Udall, ranking member on the Senate Appropriations subcommittee overseeing the Department of the Interior’s budget, told Yahoo News, “It is the height of folly to take this ‘drill everywhere all the time’ approach at a time when domestic production from public lands is already at near record levels and U.S. action on climate change is stalling. The Trump administration’s corporate giveaways won’t lead to more energy security — they’ll just lead to more litigation, since the communities and tribes were not consulted. The American people have a right to comment on the management of their lands, and they will fight back against attempts to exploit these special places that belong to all of us.

The leasing of public lands represents “real money that will go to state governments for education, roads and public safety,” she added.

But because the funds from leased lands are shared between states and the federal government, and because the Trump administration has so far struggled to lease lands, those proceeds are not likely to be especially great. For example, of the 900 lots in Alaska offered by the Department of Interior in 2017, only seven found a leasor.

In all, Alaska received nearly $580,000. That is about a fifth of what the American taxpayer pays for each of Trump’s trips to Mar-a-Lago.