The Red-State Revolt Spreads to Oklahoma

Republican voters soured on tax cuts in Kansas. Now a similar budget crisis is playing out in Oklahoma, and in a string of special-election wins, Democrats are taking advantage. 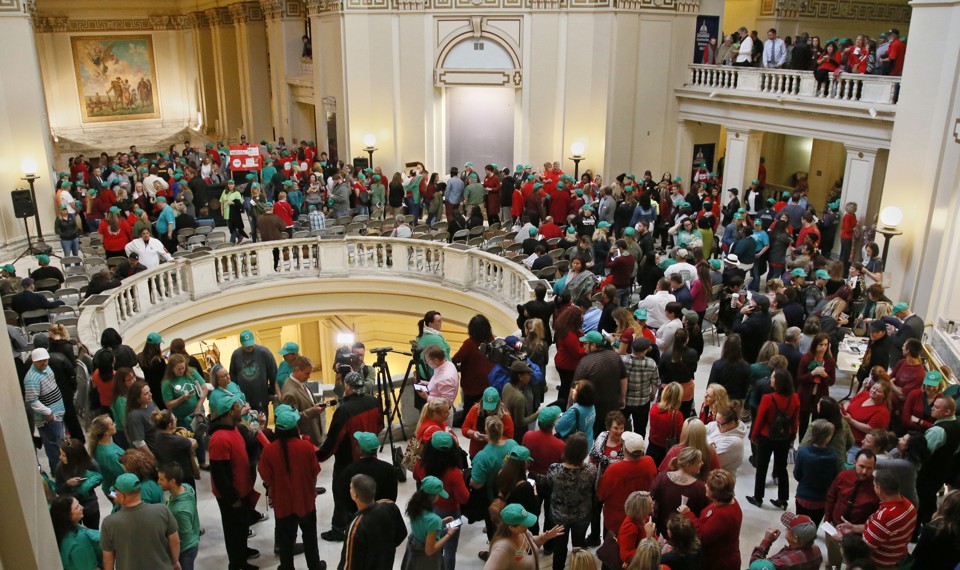 Republicans have a vise grip on power in Oklahoma, and they are in no imminent danger of losing it.

In a state that gave 65 percent of its vote to Donald Trump a year ago, the GOP controls pretty much everything: the governorship and every statewide office, both U.S. Senate seats, all five House seats. The state legislature is almost laughably one-sided; Republicans have super-majorities of more than 70 percent of the seats in each chamber.

But in the last four months, voters have repudiated those Republicans running in Oklahoma at the polls. Democrats have captured four state legislative seats held by the GOP, two in special elections for the House and two for the Senate.  The most recent—and perhaps the most surprising—win occurred last week, when a 26-year-old lesbian Democrat named Allison Ikley-Freeman edged out the Republican candidate by 31 votes in a conservative state House district near Tulsa that went heavily for Trump in 2016. Democrats may have a chance to make an even bigger statement in a few months, when a vacancy caused by the likely Senate confirmation of Representative Jim Bridenstine to be NASA administrator could trigger a special congressional election in the district that includes Tulsa.

Officials in both parties attribute the Democrats’ run in part to the party’s motivation to fight back in the Trump era, scandals that have forced Republican legislators to resign, and the low-turnout quirkiness of special elections. But the overriding factor is likely a budget crisis that has starved funding for Oklahoma’s schools, resulting in a teacher shortage and prompting more than one-quarter of the state’s districts to hold classes only four days a week.

“The people are just not happy,” former Oklahoma Governor Frank Keating, a Republican, told me in a phone interview. “Government appears dysfunctional, and government officials appear unwilling to solve the problems of the state and the nation. And there will be hell to pay.”

The political backlash in Oklahoma has parallels to the recent reckoning in Kansas, its neighbor to the north and another Republican-led state where deep tax cuts led to significant, ongoing budget shortfalls. Both states are heavily reliant on the oil-and-gas industries, and the drop in prices in recent years hit their economies hard and contributed to a falloff in state revenues. In Kansas, voters rebelled by ousting conservatives in favor of moderate Republicans and some Democrats in 2016. Earlier this year, the reconfigured legislature voted to roll back the signature tax cuts of conservative Governor Sam Brownback.

Lawmakers in Oklahoma City are now debating similar measures, and the Democrats’ special-election victories could help tip the balance in a state where a third-quarter super-majority is needed to raise taxes. “It really feels like the dam has broken, and the conversation has shifted in Oklahoma,” said David Blatt, executive director of the Oklahoma Policy Institute, a left-leaning advocacy group and think tank.

“The hostility from the general public is palpable, and it will be directed at incumbents. They will held to task.”

The budget crisis in Oklahoma has been longer in the making than the one that erupted in Kansas soon after Brownback signed his tax cuts in 2011 and 2012, Blatt said. And it implicates both parties, since it was a Democratic governor, Brad Henry, who first agreed to cut the state’s income tax in exchange for future increases in teacher pay and spending.

Those policies accelerated after Mary Fallin’s election as governor in 2010 gave Republicans full control of the government in Oklahoma, which Democrats had dominated at the state level for nearly the entire century after it joined the Union in 1907. A state that was once near the national average in the percentage of income taxes it collected from residents fell to 48th in the nation by 2014. In addition to about $1 billion in annual income tax cuts, Oklahoma have legislators voted to give between $300 million and $500 million in yearly tax breaks to the oil-and-gas industry, according to Blatt. “It’s been a serious erosion of our tax base,” he said.

In Kansas, Brownback resisted any reversal in his tax cuts on income, forcing Republican majorities to override his veto earlier in the year. But Fallin has taken the opposite approach, demanding that conservatives in the state legislature pass a budget that has substantial and recurring new revenues. A 1992 state law requiring super-majority support for tax increases has made that a challenge, however. Fallin earlier this month vetoed parts of a “cuts-and-cash” bill that closed the budget gap with a combination of one-time money transfers and spending reductions, which will likely force the legislature into a second special session to consider tax increases.

Oklahoma Democrats view the situation as evidence of a fundamental failure on the part of Republicans who spent years railing against government spending and blaming the state’s fiscal woes on a federal government led by Barack Obama, whose unpopularity in the state made his administration an effective foil. “They can’t blame it on Obama anymore, so they have no choice but to take responsibility for the failures across the board in Oklahoma,” said State Senator John Sparks, the Democratic leader.

It’s a message the party is sounding on the national level as well, where Republicans won control of both the White House and Congress but have struggled to enact their agenda and are now debating tax cuts that are similar in scope to the ones that busted the budgets in Oklahoma and Kansas. “When you have a bunch of government haters getting control of the government, it’s no surprise they don’t know how to make things operate effectively,” Sparks said.

Where the Democrats in Oklahoma see the beginnings of a wave, the state Republican Party sees little more than a ripple. Two of the seats Democrats flipped in special election came in districts where Republicans had resigned over sex-related scandals. Pam Pollard, the state GOP chairwoman, downplayed the results in an interview, pointing out that despite the Republican dominance of the state legislature, Democrats had actually won two-thirds of the special elections held in recent years. And she suggested that given the GOP’s lopsided numerical advantage, it had nowhere to go but down. Even after the special elections this year, Republicans control 40 of 48 Senate seats and 71 out of 101 in the House. “We fully anticipated that some of these would revert back to more representative of the districts,” Pollard told me.

Pollard pushed back hard against the Democratic argument that Republicans had mismanaged the state’s government. She accused local officials of playing politics  “to tug at the heart strings” by cutting down the school week rather than reducing bloated administrative expenses. And Pollard said Republicans were willing to spend more money on government where needs were demonstrated, noting that the state Department of Corrections got a 10 percent boost after an outside study recommended higher spending.

Yet the topic of tax increases remains delicate for the GOP. When Pollard broached the possibility, she stopped herself. “Let me say it better: What Republicans are looking at is not necessarily a tax increase but a change in the way revenue is collected in Oklahoma,” Pollard said. It sounds like a euphemism, and it is. But she tried to explain that the state was seeking a better balance between income taxes and sales taxes, since the rise in online shopping has led to a drop off in revenue from retail stores.

“All seats are in play, and they will be until Republicans can figure out how to keep our schools open five days a week.”

Keating, the former two-term governor who left office in 2003, saw more of a warning sign in the election results for Republicans, if only because as the party in power, they had more to lose. He told me of a conversation he recently had with a GOP state legislative candidate who had been knocking on doors in his district. The first threshold question potential voters asked was not whether he was a Republican or a Democrat, but whether he was an incumbent. “The hostility from the general public is palpable, and it will be directed at incumbents,” Keating said. “They will be held to task.”

What remains to be seen is whether the voter anger will carry over into a possible special election to replace Bridenstine in Congress. The 1st district is strongly Republican, so much so that Bridenstine first won the seat by knocking off a veteran Republican incumbent in a primary in 2012 before facing little opposition in the general election. Democrats haven’t seriously contested the seat in years. 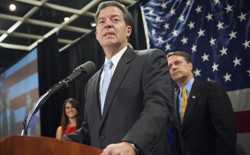 The Death of Kansas’s Conservative Experiment