It’s important to remember that, as the climate crisis deepens and we begin to feel some of its most disastrous effects—more powerful storms, raging wildfires, massive floods, searing drought—we’ve seen fit to elect as president a guy who knows nothing about anything and cares less. Donald Trump, American president, has a primal sense of what motivates people, of how to identify their weaknesses, and of how the media functions. But he knows absolutely nothing about any actual field of study, and he is not by any account a “reader.” His operating principle is to start with a conclusion about the world, then find a way to justify it. If that means repeating some nonsense over and over again until enough people believe it, then so be it.

Exhibit Z came to us yesterday in an appearance at the White House, when the world’s most powerful man got going about wildfires. “You don’t have to have any forest fires,” you see, but nobody knew about forest management before he came along and told them, you know, and forest management means “cleaning” the forests, which are dirty, unlike in other countries—”forest nations”—where they do the forest management and they don’t have the wildfires. Not like California, anyway, whose governor he talked to and told about the forest management, which the governor had never heard of about a year ago, and then he mocked the idea, but now he agrees with President Smokey. Also, many tremendous things are happening and a lot of people are looking at it. 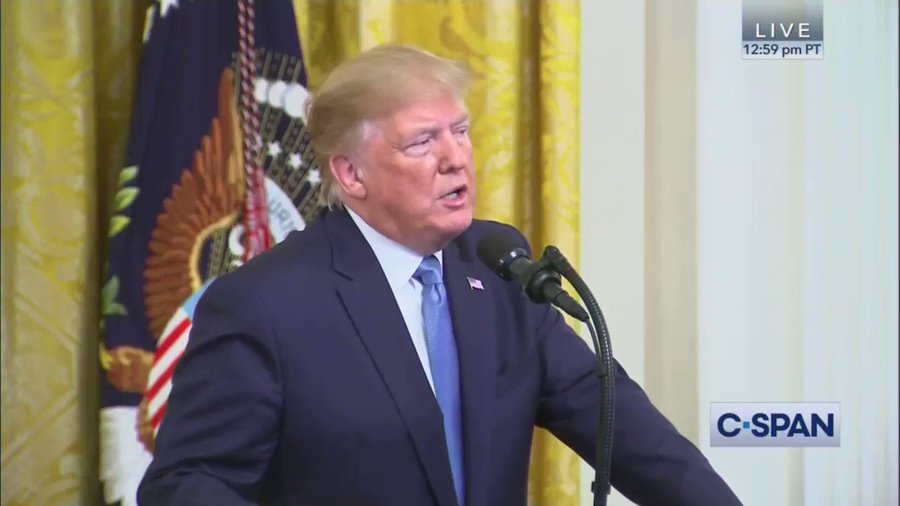 Aaron Rupar: Trump’s rant during his big environmental speech about how “cleaning” forests is the solution to wildfires and about how nobody had heard of “forest management” before he started talking about it is like an Idiocracy outtake.

This is so unbelievably dumb and insane, and it is a measure of how much we’ve lost touch with reality as a nation that we scarcely even comment on it anymore. The president is ranting about cleaning the forests and how there could be zero wildfires, as if wildfires are not a natural part of forest ecosystems that have spun out of control, perhaps because the human race has thrown things off-balance by pumping carbon dioxide into the atmosphere for more than a century.

More to the point, the president did not somehow invent forest management. It has its own page on the U.S. Forest Service website. He just made this up and kept saying it, and will keep saying it until he thinks people believe it. (Meanwhile, the “forest nation” whose leader he referenced talking to is likely Finland, whose citizens roundly mocked the president last time he trotted this out.) As a true bullshitter, he convinces himself it’s all true along the way.

This is, after all, a guy who just got caught retweeting a meme featuring a fake quote Ronald Reagan supposedly (read: never) said about him. You’d think you would be able to remember whether or not a former president said something about you, but observable reality is not at all relevant to Donald Trump. Will people believe it? Will it make them like me, and think I’m smart and strong? Say it.

What’s most shocking, however, is his ability to convince anyone of anything when everything he says is peppered with nonsense like many people are saying and we’re looking at all kinds of things. These monumentally stupid filler sentences are absolutely littered through his diction and would earn the ire of a seventh-grade teacher overseeing a student speech contest. Yet we all seem to have decided that this is not, in fact, completely fucking insane. Sort of like how we learned that, as a federal prosecutor, the president’s now-Secretary of Labor gave a sweetheart deal to an accused child sex trafficker whom the president admitted he was friendly with, and everybody kind of threw up their hands. That’s just how it goes! What a grotesque and embarrassing decline this era has become for our species.