The government is close to finishing a climate change report. President Trump won’t like it 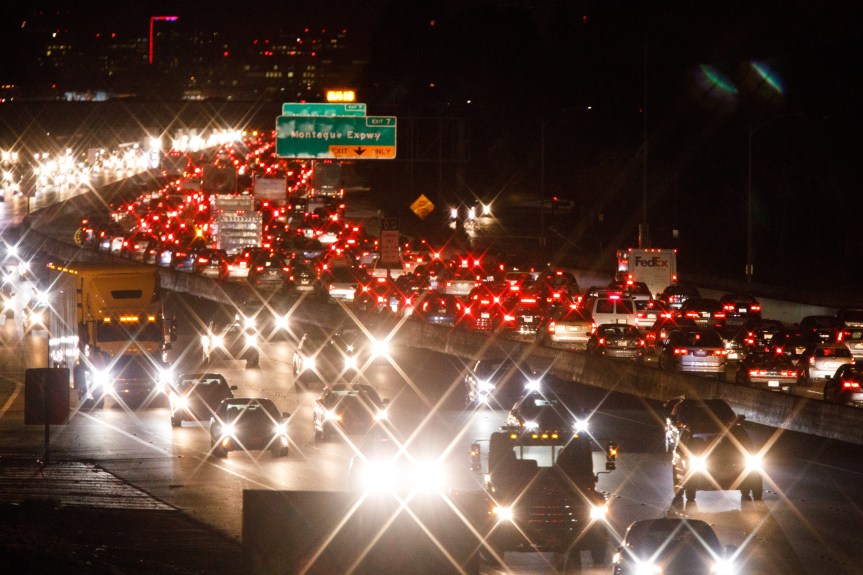 A traffic jam fills Interstate 880 in Milpitas in November. A new report says there is “no convincing alternative explanation” for climate change other than human activities such as fossil fuel burning. Dai Sugano/Bay Area News Group

The country’s top independent scientific advisory body has largely approved a major climate report being prepared by scientists within the Trump administration — suggesting that another key government document could soon emerge that contradicts President Donald Trump’s skepticism about climate change and humans’ role in driving it.

The U.S. National Academies on Monday released a public peer review of a draft document called the U.S. National Climate Assessment, a legally required report that is being produced by the federal Global Change Research Program. The document, which is in its fourth installment, closely surveys how a changing climate is affecting individual U.S. states, regions, and economic and industrial sectors. The final version is expected later this year; the last version came out in 2014 during the Obama administration.

The process highlights how despite the changing political context — and even hints that the Trump administration may try to subject federal climate science to additional, adversarial reviews — technical government studies of climate science continue.

The report, 1,506 pages long in draft form, says U.S. temperatures will rise markedly in coming decades, accompanied by many other attendant effects. It predicts that Northeastern fisheries will be stressed by warmer ocean waters, that the Southeast will suffer from worsening water shortages, that worse extreme-weather events will tax water and other types of infrastructure, and far more.

For the most part, all of this has received a check mark from a panel of scientific referees at the National Academies.

“We had 16 experts review it, go through it in detail, see if it meets the congressionally mandated requirements, and we agree that it did,” said Robin Bell of Columbia University’s Lamont-Doherty Earth Observatory, head of the committee that reviewed the report.

The draft document lays out the current and future effects on the United States at a higher level of resolution than before, Bell said, focusing closely on the Caribbean, looking separately at the northern and southern Great Plains, examining air pollution, and more.

“As the pace of coastal flooding and erosion accelerates, climate impacts along our coasts are exacerbating preexisting social inequities as communities face difficult questions on determining who will pay for current impacts and future adaptation strategies and if, how, or when to relocate vulnerable communities,” it continues.

Regarding agricultural communities, the draft states that “reduced crop yields, intensifying wildfire on rangelands, depletion of surface water supplies, and acceleration of aquifer depletion are anticipated with increased frequency and duration of drought.”

When it comes to the fundamental science of climate change, the National Climate Assessment is based, in significant part, on another report, dubbed the Climate Science Special Report, that was finalized and released by the Global Change Research Program late last year.

That document found that there was “no convincing alternative explanation” for climate change other than human activities such as fossil fuel burning. It also said a sea-level rise as high as eight feet is “physically possible” as an extreme by the year 2100, though there was no way to say how probable that is.

Many scientists initially feared that the Trump administration would in some way suppress or otherwise interfere with the release of the Climate Science Special Report, given that it so thoroughly appeared to undermine the president’s personally expressed skepticism of climate change and his decision to withdraw the United States from the Paris climate change agreement. But the report was released as expected, and there were no significant cries of censorship or political meddling.

Now, the question is whether the same will occur with the longer National Climate Assessment, which goes beyond the Climate Science Special Report to locate the climate problem within specific U.S. communities and industries, describing both how they will suffer and how they are coping. The National Climate Assessment arguably has more potential for political ramifications, in that it exhaustively describes effects in specific places in the country.

“There are many stories about the change, and that’s the beauty of this, you can go to the document and find stories in your community no matter where you live in the U.S.,” Bell said.

Granted, the current review is not a 100 percent endorsement — for instance, it states that when it comes to discussing different types of scientific uncertainty, “improved differentiation and more standardized treatment is needed across the draft report.” The document also contains more than 40 pages of line edits to the longer report.

But this is not a fundamental undermining of the document — it just means more work has to be done for it to be improved before publication.

“They are meant to provide clarification and ease of use by the readers but not direction-changing sorts of recommendations,” said Daniel Cayan, a professor at UC San Diego and one of the peer reviewers.

The report will be revised in light of these critiques by its federal authors — and move toward anticipated final-form publication later this year.

It’s not just that the water is rising — the land is sinking, too

Letter: Trump’s tariffs on solar cells are not the answer

“There’s a tremendous interest and demand for updated information and also examples of how various communities are approaching climate issues,” Cayan said. “So, I believe that there’s a community of consumers that really are depending on the National Climate Assessment, and I would be very surprised if it does not continue and it is not sustained.”