It’s not just the Florida spa investigation allegedly tied to Robert Kraft. Sex trafficking is rampant across US 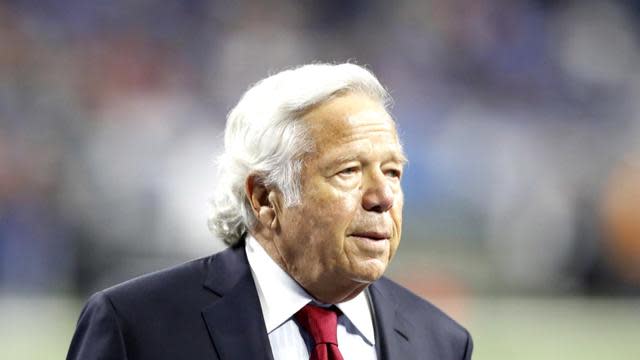 While charges against New England Patriots owner Robert Kraft for soliciting prostitution brought national attention to the issue of sex trafficking on Friday, data, expert opinion and cases from around the USA show how widespread the problem is.

Sex trafficking accounted for 6,081 of the more than 8,500 reported cases of human trafficking in the United States in 2017, according to statistics from the National Human Trafficking Hotline.

Illicit massage or spa businesses, similar to the ones in the Florida case, were the top location or industry where sex trafficking occurred in 2017, with 714 reported cases, according to the hotline’s data.

More than 9,000 illicit massage businesses operate in every state around the country, bringing in a stunning $2.5 billion each year, according to estimates in a 2018 report by Polaris on trafficking in these businesses.

“It’s not accurate to understand these cases as local,” Bradley Myles, CEO of Polaris, told USA TODAY on Friday. “The places are being overlooked and underestimated.”

Characteristics of the average illegal spa that Polaris details fit with how prosecutors described ones in Florida.

Ten spas were shut down in Orlando, Palm Beach County and the Treasure Coast after a several months of investigation revealed women there were in “sexual servitude,” according to arrest records.

At Orchids of Asia Day Spa in Jupiter, Florida, where Kraft allegedly paid for sexual services, women – many of them from China – lived in the spa and were not permitted to leave, according to Martin County Sheriff Will Snyder.

Kraft, who has been charged but not arrested, denied the allegation. He is one of hundreds of alleged clients facing charges in the recent Florida stings.

Like some of the spas that allegedly engaged in sex trafficking in Florida, the average illicit massage business is connected to at least one other, according to Polaris.

Myles said most are tied to larger criminal networks that have links to the countries where many of the women at the spas are from. Many of the women are coerced to work in the businesses and often earn no wages and have no autonomy, Myles said.

“These girls are there all day long, into the evening. They can’t leave and they are performing sex acts,” Vero Beach police Chief David Currey said of the investigation. “Some of them may tell us they’re OK, but they’re not.”

Beyond sex-trafficking at just massage spas, the United States prosecutes hundreds of cases each year and wins scores of convictions on charges of trafficking with respect to slavery and sex trafficking of children by force, fraud or coercion, according to an analysis of federal records by the Transactional Records Access Clearinghouse at Syracuse University.

In fiscal year 2018, 189 cases resulted in convictions, according to TRAC’s data.

Here’s a look at how sex trafficking has affected areas across the country:

In March last year, a report estimated 340 young adults and children have been victims of sex trafficking in Milwaukee in a four-year period.

“We’ve heard from different sources that we’re the mecca of sex trafficking, but we need to be able to measure that,” Mallory O’Brien, director of the Milwaukee Homicide Review Commission, which participated in the report, told the Milwaukee Journal Sentinel at the time.

“This was our opportunity to do that,” she said.

Research found 340 people ages 25 and younger who were confirmed or believed to have been victims of sex trafficking in Milwaukee between Jan. 1, 2013, and Dec. 31, 2016.

Overall in Wisconsin, child welfare workers confirmed 99 incidents of children and youth sex trafficking statewide from June 2017 through August, 2018, the state Department of Children and Families said in January.

Backpage and effects of its shutdown

The CEO and co-founder of Backpage.com, Carl Ferrer, pleaded guilty in April to charges of facilitating prostitution and money laundering after the Justice Department seized the controversial online classifieds site.

The website’s other co-founders Michael Lacey and James Larkin, as well as five other executives, faced 93 charges involving facilitating prostitution through the Backpage site and money laundering.

While some praised Backpage’s demise as a blow to an abusive industry, sex workers across the United States and Canada swarmed social media to air concerns rarely heard in political discourse: To them, Backpage’s demise meant the end of safeguards and a reliable revenue stream in a profession that’s not going anywhere.

While many sex workers said they would keep posting on smaller websites, they also worried about the future.

“There’s a lot of uncertainty; a lot of grief and fear,” Jelena Vermilion, a sex worker based outside of Toronto told the Arizona Republic in April. “A lot of people are essentially planning to be homeless, planning how to fall gracefully as much as possible.”

On the flip side, Backpage’s shutdown affected law enforcement trying to help victims of sex trafficking.

Before Backpage was terminated, Cpl. Chris Heid could locate sex trafficking victims exclusively on the website.

Backpage was responsive to the Maryland State Police corporal’s requests for records and his agency’s warrants and subpoenas. When he asked the site to remove advertisements he determined were trafficking-related, moderators complied – sometimes within minutes.

While anti-trafficking operations by Maryland State Police yielded three more arrests in 2018 (when Backpage was seized) than the year prior, the number of victims police came in contact with dropped 38 percent, from 113 in 2017 to 70 last year, the Salisbury Daily Times reported in February.

‘There’s a place for them. They just don’t know it yet’

Survivors who come to live there enter a two-year program that includes drug and alcohol rehabilitation as well as education, counseling, job training and support.

Speaking with the Detroit Free Press, founder Edee Franklin described human trafficking as a snare of tiny strings that pulls victims back again and again.

One by one, she’s trying to snip those strings to free women who want to get out, but have yet to find a way because they don’t have a safe place to live or are without access to drug or alcohol rehab, financial security, job training or an education.

“There are women out there right now that are being raped and brutalized and they are saying, ‘Dear God, get me out of this.’ And there’s a place for them. They just don’t know it yet,” Franklin said in December 2017.

The National Human Trafficking Hotline is confidential, toll-free and available 24/7 in more than 200 languages.