The teacher blasts his former law school student in an Op-Ed.

Scott Pruitt, the head of the Environmental Protection Agency, is nothing if not lawyerly.

As Oklahoma’s attorney general, he waged war against Obama-era environmental rules by arguing on technicalities. He billed himself as a “leading advocate against the EPA’s activist agenda.”

Since taking over the agency he sued more than a dozen times, he has defended the Trump Administration’s deregulatory campaign in complex legalese, arguing that the issue is not how best to protect the environment and public health, but how to adhere to his narrow interpretation of the EPA’s mandate under the law. He even thanked a Time Magazine reporter for calling him “lawyerly” in an interview last month.

For that, Rex J. Zedalis, who taught Pruitt at the University of Tulsa’s law school in the early 1990s, said he has “tossed and turned” for “countless nights.”

“I confess regret for whatever small role I played in unleashing Administrator Pruitt on the unsuspecting public,” Zedalis wrote in an Op-Ed published Monday in The Santa Fe New Mexican. “Surely I’m at least partially to blame for failing to nurture in him a deep regard for seeing law as an instrument for addressing real facts on the ground, not simply implementing a political ideology, regardless the facts. 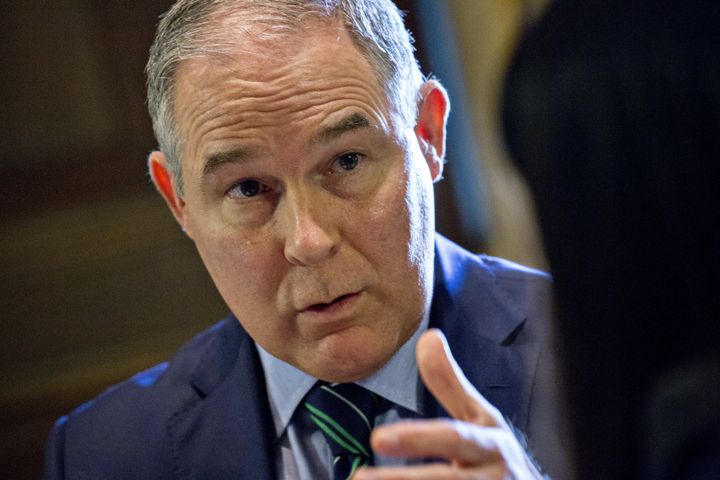 Bloomberg via Getty Images. Scott Pruitt’s actions since becoming head of the Environmental Protection Agency have chagrined one of his former law professors.

He pointed to Pruitt’s proposal to repeal the Clean Power Plan, the sweeping set of Obama-era regulations meant to curb planet-warming emissions from the utility sector. While still at his Oklahoma post, Pruitt persuaded the Supreme Court to issue a stay on the plan last year, so it never went into effect. Since becoming EPA’s chief under President Donald Trump, Pruitt submitted a policy to eliminate the Clean Power Plan without replacing it, a move critics said demonstrated his intention to cripple efforts to curb climate change rather than refine the legal framework through which that action is taken.

“I understand why Obama’s environmental measures seem objectionable to Administrator Pruitt,” Zedalis wrote. “What I fail to comprehend, though, is his utter disregard for tailoring EPA regulatory actions so they address the environment as facts demonstrate we find it, not as we imagine it.”

I confess regret for whatever small role I played in unleashing Administrator Pruitt on the unsuspecting public. Rex J. Zedalis, University of Tulsa College of Law

He said Pruitt’s attempts to unravel climate regulations are rooted in a refusal to acknowledge the overwhelming evidence that climate change is dangerous, human-caused and addressable. Ninety-seven percent of peer-reviewed research agrees with the conclusion that factors including the burning fossil fuels are warming the planet with greenhouse gases. And a research review published last November found significant flaws in the methodologies, assumptions or analyses used by the 3 percent of scientists who found otherwise.

“What affords all of us, including Administrator Pruitt, the chance to blithely live regret-free is the fact we never live long enough to witness the full effect of many of our decisions,” Zedalis wrote. “As discomforting as it might be to accept consensus decisions of the scientific community on particular matters, the alternative raises the specter of regression to the Dark Ages’ reliance on the shaman and the soothsayer.”

The EPA did not immediately respond to a request for comment from Pruitt.