Ukraine has claimed that 121 children have been killed during the course of the Russian invasion, amid reports thousands have been kidnapped and taken across the border.

Since Vladimir Putin’s forces entered Ukraine on 24 February, a further 167 children have been wounded, the office of the prosecutor general said on Wednesday.

The figures have not been able to be independently verified.

Ukraine also claimed on Tuesday that 2,389 children had been “kidnapped” by Russia and transported across the border from the eastern oblasts of Donetsk and Luhansk.

The US Embassy in Kyiv cited the Ukrainian foreign ministry, tweeting: “This is not assistance. It is kidnapping.

The ministry called it a “gross violation of international law”.

The claims of kidnapping also cannot be independently verified as the area has been besieged by the invading forces for over two weeks.

In the southern city of Mariupol, more than 100,000 people are believed to be trapped inside the bombard city with no access to food, water, power or heat.

Authorities in Mariupol said several thousand of its residents had been forcibly deported to Russia.

Intense Russian air strikes have turned Mariupol into the “ashes of a dead land”, the city council said on Tuesday, as street fighting and bombardments raged in the port city.

Russian forces and Russian-backed separatist units had taken about half of the port city, normally home to around 400,000 people, Russia’s RIA news agency said, citing a separatist leader. 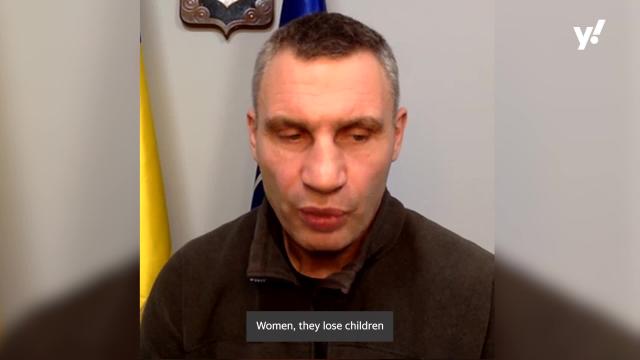 But in an early morning address, Ukrainian president Volodymyr Zelenskyy held out hope for negotiations, which have yielded little since the invasion began.

“It’s very difficult, sometimes confrontational,” he said. “But step by step we are moving forward.”

Putin’s incursion into Ukraine has forced more than 3.5 million to flee, brought the unprecedented isolation of Russia’s economy, and raised fears of wider conflict in the West unthought-of for decades.

Mariupol has become the focus of the war that erupted when Putin sent his troops over the border on what he calls a “special military operation” to demilitarise Ukraine and replace its pro-Western leadership.

Russia has maintained only military targets are being hit as Putin’s forces carry out a “special military operation” – but footage from the scenes of the attacks tell of a different reality.

A nursery in Okhtyrka, 70 miles from Kharkiv, was destroyed when it was bombed on 25 February, just over 24 hours into the invasion.

Six people died after the Sonechko Nursery and Kindergarten was targeted, including seven-year-old Alisa Hlans and her grandfather, who is said to have been killed in front of her as he tried to rescue the youngster.

Amnesty International claimed the attack was from cluster bombs which were released in the residential area.

In Kyiv a fourth-grade student from Kyiv called Polina, who is thought to be either nine or 10, and her parents, were killed when the car they were in was shot at by Russian troops in Kyiv.

On 9 March, Russia sparked further international condemnation when a children’s and maternity hospital in Mariupol was bombed.

Pictures and video from the scene showed heavily pregnant women being pulled from the rubble, covered in injuries.

A six-year-old girl and two adults were reported dead in the immediate aftermath of the attack, which Russia claimed was “fake news”, claiming it was a viable military target.

Another woman caught up in the bombing, who was pictured being carried away on a stretcher, was subsequently reported dead five days later alongside her newborn baby.