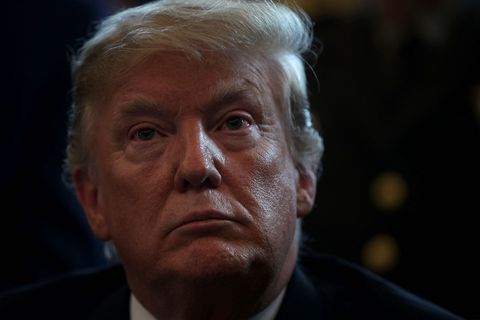 At some point, maintaining your own grip on reality means accepting that the President of the United States has lost his. The man’s brain is not good, you see. One way you can tell is that he spent his Sunday going absolutely intergalactic on the Tweet Machine, offering his considered opinion on Fox News’ weekend programming, decrying the scourge of Saturday Night Live—which he seemed to accuse of colluding with Russia—and, of course, forwarding some caps-heavy ruminations on the many investigations into him and his associates. Oh, and he also wished folks a Happy St. Patrick’s Day, shortly before the party he leads tweeted an attack on Beto O’Rourke  linking his 1998 DUI arrest to his Irish ancestry—you know, because the Irish are alcoholic criminals. Some throwback bigotry!

But the cornerstone of the weekend meltdown from Donald Trump, American president, were his complaints about what was coming to him through the TV—the medium that is, without exaggeration, the governing force of his own private reality. He kicked things off with a high-pitched whine about SNL, a comedy show that makes fun of political figures by putting makeup on famous actors and having them read a transcript of what the real person said the week before.

Donald J. Trump: It’s truly incredible that shows like Saturday Night Live, not funny/no talent, can spend all of their time knocking the same person (me), over & over, without so much of a mention of “the other side.” Like an advertisement without consequences. Same with Late Night Shows……

Donald J. Trump: ….Should Federal Election Commission and/or FCC look into this? There must be Collusion with the Democrats and, of course, Russia! Such one sided media coverage, most of it Fake News. Hard to believe I won and am winning. Approval Rating 52%, 93% with Republicans. Sorry!

This appears to be the president’s version of a joke. The “Fake News” generated by a sketch comedy show is evidence of Collusion with Russia. (Also, the episode of SNL that NBC aired this week was a rerun.) It’s funny because during the 2016 campaign, the president’s campaign manager allegedly sent confidential polling data to his longtime associate linked to Russian intelligence.  There was then a requisite attack on Christopher Steele and “The Dossier,” which Trump, for the umpteenth time, falsely suggested was the impetus for the Russia probe. The investigation began in May 2016 when George Papadopoulos, a Trump campaign foreign policy adviser, got plastered in a London bar and blabbed to Australia’s top diplomat in Britain that Russia had dirt on Hillary Clinton.

Donald J. Trump: So it was indeed (just proven in court papers) “last in his class” (Annapolis) John McCain that sent the Fake Dossier to the FBI and Media hoping to have it printed BEFORE the Election. He & the Dems, working together, failed (as usual). Even the Fake News refused this garbage!

Here is the president, who enlisted his fixer to threaten his schools never to release his transcripts—presumably, because his grades were so good that voters might get jealous—ragging on the academic record of John McCain, who died seven months ago of brain cancer. The attack is also rooted in a series of blatant falsehoods, according to the Washington Post, not least because McCain “was not made aware of the Steele dossier until Nov. 18, 2016—after Trump had won the election” and “there is no evidence he gave it to the media.” Never mind the truth when you’ve got the chance to drag a dead man’s name through the mud.

But then it was time to attend to the core matters of state: why aren’t my favorite TV people on my TV saying nice things about me?

Donald J. Trump: Bring back Judge Pirro. The Radical Left Democrats, working closely with their beloved partner, the Fake News Media, is using every trick in the book to SILENCE a majority of our Country. They have all out campaigns against Fox News hosts who are doing too well. Fox …..
Donald J. Trump: ….must stay strong and fight back with vigor. Stop working soooo hard on being politically correct, which will only bring you down, and continue to fight for our Country. The losers all want what you have, don’t give it to them. Be strong & prosper, be weak & die! Stay true….

Donald J. Trump: ….to the people that got you there. Keep fighting for Tucker, and fight hard for Judge Jeanine. Your competitors are jealous – they all want what you’ve got – NUMBER ONE. Don’t hand it to them on a silver platter. They can’t beat you, you can only beat yourselves!

“Judge Jeanine” was condemned for suggesting, in a pre-scripted monologue, that because Minnesota Rep. Ilhan Omar wears a hijab, she adheres “to Sharia law, which in itself is antithetical to the United States Constitution.” Pirro floated this in the form of a question, but the intent was obvious—to the point that Fox News reportedly suspended her.  (The network refuses to comment publicly.) You’ll note that the president defended this anti-Muslim fear-mongering two days after a white nationalist committed terrorist attacks against two Mosques in New Zealand. It should be no surprise: the shooter cited Trump as “a symbol of renewed white identity and common purpose,” and within 24 hours trump was echoing the “invasion” language the terrorist used to describe nonwhite immigration.

After tweeting a Fox clip directly, the United States president proceeded to attack a local Union leader, seeming to blame him for G.M.’s decision to close a plant in Lordstown, Ohio, at the cost of 5,400 jobs.

Donald J. Trump: Democrat UAW Local 1112 President David Green ought to get his act together and produce. G.M. let our Country down, but other much better car companies are coming into the U.S. in droves. I want action on Lordstown fast. Stop complaining and get the job done! 3.8% Unemployment!

According to the Washington Post, the tweet came directly after a segment on (shocker) Fox News, in which it was suggested Trump might struggle in areas of the Rust Belt because he has not delivered on his promises to protect manufacturing jobs there. In July 2017, at a rally in nearby Youngstown, Trump told the crowd “don’t sell your house” because the jobs are “all coming back.” While the U.S. added the most manufacturing jobs since 1997 last year, areas like this have continued to hemorrhage jobs.

Then it was back to the president’s main duty as outlined in the Constitution, to serve as the nation’s top television critic.

Donald J. Trump: Were Fox News weekend anchors, Arthel Neville and Leland Vittert, trained by CNN prior to their ratings collapse? In any event, that’s where they should be working, along with their lowest rated anchor, Shepard Smith!

Where are the lackeys? Where is my praise?

The president then went on a Retweet Spree. He retweeted one of those professional MAGA fan accounts that, shockingly, agreed with his take on Fox News Anchors Offering Insufficient Praise for the Leader. Trump shared a message from a definitely real account assuring him that millions of Americans like Trump more than John McCain. The president shared multiple articles from “ilovemyfreedom.org.” And finally, he retweeted a supporter of QAnon, a loopy conspiracy theory based on anonymous posts on an Internet forum.

We have to fight back. They have not let up on President Trump, nor his supporters since they lost. They are losers, we are winners! President Trump calls on Fox News to ‘bring back’ Jeanine Pirro

This was apparently a huge boost to the followers of “Q”. An authorless book associated with this “movement” was already in the top 75 books on Amazon. The book claims, among other things, that prominent Democrats murder and eat children.

After the Retweetapalooza, it was almost over. But not before Trump bragged he’d talked to Mary Barra, the GM CEO, about the Lordstown plant closure—once again suggesting the union was to blame. He did not bother to claim the call had accomplished anything. Then he said Democrats tried to steal the 2016 election. And then there was this:

Once again, we’ve been subjected to an extended public presidential meltdown. It appears the World’s Most Powerful Man spent his Sunday watching Fox News and reacting explosively to whatever came on screen. It might seem like this is no way to run your life, much less the country, but that’s why you’re not an Artful Dealmaker and The Leader America Needs.

Throughout, we were also subjected to feeble pushbacks like the one from Senator Lindsey Graham, who piggybacked on John McCain to smuggle himself into political prominence. Now Graham, who once maintained Trump was a “kook” who’s unfit for office, has now attached himself at the hip to the man who dragged McCain’s name through the mud in life, in severe sickness, and in death.

What a nice encapsulation of the kind of moral and political decay of this nation, a collapse that has given this president the time and space to trample our republic. The Mad King rants and raves as the messages filter into his brain from the TV, while the cowards in Congress tell us all in Very Serious Tones that, while it may appear he has no clothes, he merely takes an unconventional approach to dressing himself each morning. Meanwhile, he continues to ratchet up the talk of political violence.