Trump suggests scrapping an undemocratic institution to which he owes everything. 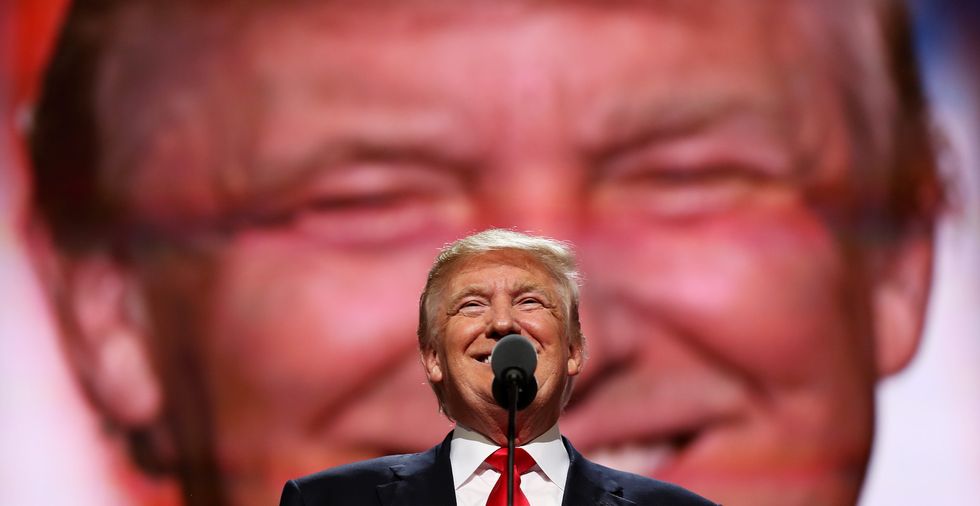 The president knows nothing about much of anything, and cares less. He is President Fox News Grandpa, the low-information voter we elected to make some of the most complex, nuanced decisions facing any human being in the history of the world. Donald Trump has no area of expertise and very little in the way of intellectual curiosity, but he does have a bottomless faith in the power of his own gut instinct. Sometimes, this has disastrous consequences. Sometimes, it is seriously hilarious.

Take Thursday, for example. As part of an overall freak show on Fox & Friends, Donald J. Trump announced he wanted to abandon the Electoral College and use the popular vote to elect United States presidents:

Of course, Trump is president solely because of the Electoral College, an anti-democratic anachronism that has outstayed its welcome by at least a half-century. He lost the popular vote—which he wants to switch to—by nearly 3 million. Then again, he claims 3 million people voted illegally in California alone. There is zero evidence of that, but plenty of evidence it’s a deranged lie borne of crippling insecurity that he is not a truly legitimate president.

Trump has also long sustained himself, as he did speaking to the Friends of Fox, on the belief he could and would have won the popular vote if he hadn’t spent so much time winning the Electoral College:

trump tweet: Campaigning to win the Electoral College is much more difficult & sophisticated than the popular vote. Hillary focused on the wrong states!

trump tweet: I would have done even better in the election, if that is possible, if the winner was based on popular vote – but would campaign differently

Of course, even when you dive into the details of his Electoral College win, the numbers aren’t exactly pretty. Trump won the three key states in 2016—Michigan, Pennsylvania, and Wisconsin—by a combined 77,000 votes, a razor-thin margin. But thanks to the ludicrous Electoral College system, he received all of their 46 combined electoral votes.

This is why the system is so undemocratic, along with the fact that it makes some citizens’ votes count for more than others. Because only a small group of “swing states” are up for grabs, the residents of other states are largely ignored and have little impact on the outcome. If it were a popular vote, the vote of a Texan or a Californian would be just as valuable as an Ohioan—and turnout might even be higher as a result.

Montana has just over a million residents and two senators. California has 39.5 million residents…and two senators. That means each Montanan receives far more representation by percentage in the Senate—and by extension, the Electoral College. That was actually an explicit goal for the Founders: representatives of rural and less-populated states, mostly in the southern colonies, were wary of being dominated by densely populated states, most of which were in the north. The compromise was to have a House of Representatives tied closely to population, but equality among states in the Senate.

All this is to say that, contrary to Trump’s shtick, the Electoral College is not some game devised to make it easier for Democrats to win elections. In fact, it’s closer to the opposite: In the five presidential elections since 2000, Republican candidates won the popular vote just once—but won the presidency three times. If Trump wants to blow that up out of some very on-brand combination of ignorance and hubris, American democracy stands to benefit. A broken clock, twice a day, et cetera.