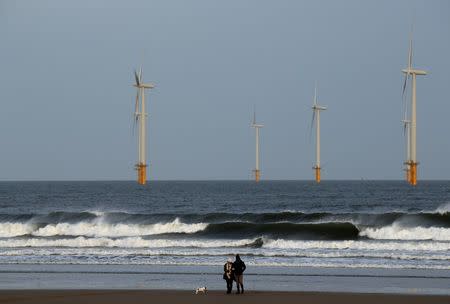 LONDON (Reuters) – The price Britain will pay for new offshore wind power has plunged below new nuclear generation for the first time, according to figures from a power auction on Monday.

The rapidly falling cost of wind power may stoke criticism of the government for promising much higher prices to investors in the long-delayed Hinkley Point C nuclear power plant, the first to be built in Britain for more than 20 years.

Britain needs to invest in new capacity to replace ageing coal and nuclear plants that are due to close in the 2020s.

Renewables, such as wind power and solar, can only meet part of those needs because of their variable supplies determined by the weather and, for now, there are no large scale energy power storage options.

Nuclear plants can offer a steady supply, but plans for Hinkley Point C have been beset by delays and rising construction costs.

Britain’s subsidy auction for new offshore wind projects awarded contracts between at 74.75 pounds and 57.50 pounds per megawatt hour (MWh) depending on the delivery date.

That compares with the 92.50 pounds/MWh, index linked to inflation, awarded to France’s EDF in 2012 to build Hinkley Point C.

“This auction has demonstrated the real progress in cost reduction and our result shows how affordable offshore wind can be compared to other technologies, including new thermal generation,” said João Manso Neto, CEO of EDP Renováveis which was successful in the auction.

The eleven renewable energy projects that won contracts are expected to deliver up to 3 gigawatts (GW) of new electricity generation capacity from 2021-2023, with the contracts worth up to 176 million a year, the government said.

Dong Energy’s Hornsea 2 was the largest project to win a contract, and at 1.4 gigawatts (GW) is set to be the world’s largest wind farm when it begins generation in 2022.

The cost of producing electricity from wind farms has plummeted in the past few years, helped by larger turbines.

The British and German subsidies are not directly comparable since the German tender did not include transmission costs which typically make up about 25 percent of a project’s total cost.

As part of extensive reforms to Britain’s electricity market, the government replaced direct subsidies with a contracts-for-difference (CfD) system.

Under the scheme, qualifying projects are guaranteed a minimum price at which they can sell electricity and renewable power generators bid for CfD contracts in a round of auctions.