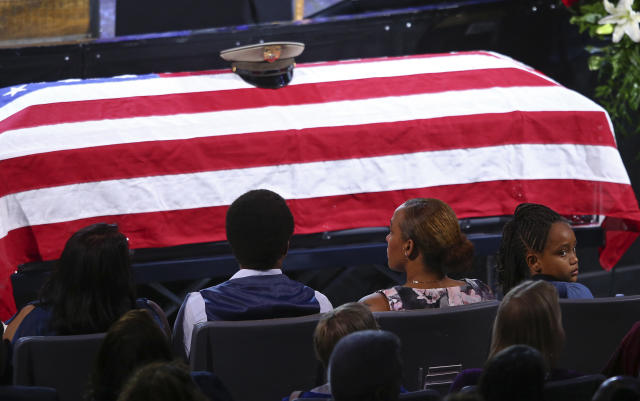 The bullet struck the woman’s right forearm, passing cleanly through the flesh below her wrist and exiting the other side. The round was tumbling now, but still carrying enough force to re-enter her arm, lower down this time, before exiting again and plunging into her chest. The lead projectile then burst through her liver, finally coming to rest in the first lumbar vertebra of her lower back. Her death, described by a medical examiner, was determined to be a homicide.

The unnamed woman was one of 58 victims killed by a lone gunman at a country music concert on the Las Vegas Strip on Oct. 1, the deadliest mass shooting in modern U.S. history.

HuffPost obtained autopsies for each of the 58 victims. The reports, released by the Clark County, Nevada, coroner’s office earlier this month, offer a raw account of the power of civilian weaponry and the damage it inflicts on human bodies, even when the gunman appears to have no particular firearms expertise.

They describe catastrophic injuries, most the result of single rounds striking from a range of nearly 500 yards ― details of carnage that we tend to shy away from in media coverage.

After a mass shooting, news stories often reduce victims to parts of a larger body count, the latest casualties of this particularly American form of gun violence. Just look at the headlines for the school shooting in Florida on Wednesday: “Mass Casualty Shooting At Florida School.”

Other coverage focuses exclusively on honoring slain individuals, a celebration of life that seeks to underscore the tragedy of a mass shooting.

Both types of stories can obscure and desensitize us to the disturbing violence. The autopsies, on the other hand, give an unsanitized truth to those stories.

Among the victims in Las Vegas were 36 women and 22 men; 51 were killed by a single shot, while seven were hit by multiple rounds; 34 suffered fatal gunshot wounds to the body, while 21 were struck in the head or neck and three were struck in their extremities. In addition, 851 people were injured in the attack, including 422 who suffered non-fatal wounds from gunfire.

With bullets exiting the shooter’s weapons at a velocity of about 3,000 feet per second ― about three times as fast as a bullet fired out of a handgun ― and spinning at thousands of revolutions per second, the consequences for anyone hit directly were dire.

“You’ve got a relatively small cross-sectional area with a tremendous amount of kinetic energy lined up behind it, so that just penetrates,” said Arthur Alphin, a ballistics expert and former West Point professor who has testified in a number of multiple shooting cases.

The autopsies describe bullets carving through flesh, leaving massive trauma in their wake. One victim suffered a gunshot wound to the left upper back. The round appeared to be tumbling end over end at the moment of impact, said Alphin, likely a sign that the gunman’s weapon had begun to overheat from firing so rapidly, sending the bullet on an unstable trajectory out of an expanded barrel.

After being struck in the back, the round coursed through the woman’s body, ricocheting off a rib and perforating her left lung before stopping between her eight and ninth vertebrae, where a medical examiner recovered the bullet.

The autopsy for the woman described at the beginning of this article shows she was shot in the forearm. The bullet passed through her arm twice and then entered her body.

“I’m thinking that this person had their arm up at the shoulder, but bent back at the elbow, as if scratching their ear or trying to shield their eyes or keep a hat from flying off their head,” said Alphin.

It’s also possible she was trying to shield herself.

Another report describes a woman who was struck in the head. As with the other victims who suffered direct shots to the head, the impact caused “instant death,” Alphin said.

“The only good thing is she didn’t suffer. She felt no pain at all,” he said. “Some of those others, even though they died with the chest cavity wounds, they survived on the ground for 60 to 90 seconds, their heart continued to beat, the blood filled up into the pleural cavity and the thoracic cavity, their brain was still functioning, and they knew they were dying and they were in pain. At least this poor woman, it was instant.”

The only good thing is she didn’t suffer. She felt no pain at all. Arthur Alphin, ballistics expert

Wounds from these military-style rifles look much different from those caused by a handgun, said Dr. Brian H. Williams, a trauma surgeon who now serves as medical director of the Parkland Community Health Institute in Dallas.

Williams said that most of the gunshot wounds he’s treated appeared to be from handguns, but he was on duty during a July 2016 mass shooting in Dallas in which a gunman killed five police officers with a semi-automatic rifle. To get a sense of a handgun shot, Williams compared the impact to what happens when you drop a rock in the water and it makes a small splash and some ripples. Now, take that same rock, bring it up over your head and slam it into the water. That much bigger splash with larger ripples that emanate farther illustrates the difference of a rifle round hitting human flesh.

“That’s similar to what a bullet does when it enters the body,” said Williams. “The projectile from the military weapon that’s going much faster can cause much more damage.”

In just 10 minutes, the Las Vegas shooter was able to fire off more than 1,100 of these rounds from his perch on the 32nd floor of the Mandalay Bay hotel, each one a potential death sentence. Investigators say he was outfitted with more than a dozen assault-style rifles, many of them equipped with 100-round magazines and bump stocks, after-market accessories that simulate automatic fire.

With this sort of firepower, the gunman didn’t even need to have good marksmanship or anything more than a basic understanding of his weapons. All he needed to do was pick up a loaded gun, point it toward the helpless people in the distance and pull the trigger until it was empty, discard the spent rifle and pick up another one.

At the range he was firing from, the rounds had likely lost enough speed to make them subsonic when they reached their target, meaning they wouldn’t have made the cracking noise a bullet makes when it breaks the sound barrier, said Alphin. As a result, the concertgoers stayed tightly packed for moments before they had any idea they were under fire.

There was no hope of survival for many of those unlucky enough to be hit.

“These are military rounds, and they’re designed to be one shot, one kill,” said Dr. John Fildes, a trauma surgeon at University Medical Center in Las Vegas, who was on duty the night of Oct. 1. “They do more than just bore holes through people. They tumble and they create cavities, and that tears at tissue.”

To get a sense of the extent of the wounds, Fildes recommended looking at what happens when a round of this caliber passes through ballistic gel, which is meant to mimic human flesh.

It appears that the bullets functioned as intended in many cases. Other patients ended up in the hospital with a variety of gunshot-related injuries, though many appeared not to have been struck cleanly, Fildes said.

Fildes added that some of the fragments were traveling fast enough to puncture the chest, abdomen or extremities, and even to fracture bones. And it’s possible that victims were hit by shrapnel from sources other than bullets.

“You could’ve been standing at row 32 at the concert and a guy off to your right at row 35 gets hit in the back. That bullet might exit his body, turn in flight and hit you,” said Alphin. “Or it might be tumbling in the guy’s body, hit his femur or some other major bone, eject a bone fragment and it hits you with a bone fragment. That’s just common.”

Over the past decade, we’ve seen Americans gunned down en masse at concerts, in churches, schools, movie theaters and nightclubs. We’re often called upon to remember the victims who’ve died in those incidents, but rarely are we asked to confront the unsettling circumstances of the deaths themselves.

In 2015, then-California Attorney General Kamala Harris, now a U.S. senator, argued that lawmakers should have been forced to do exactly that before voting on gun legislation after the 2012 mass shooting at Sandy Hook Elementary School in Newtown, Connecticut.

“Spread out the autopsy photographs of those babies and require them to look at those photographs,” Harris said. “And then vote your conscience.”