I No Longer Believe House Democrats Will Uphold Their Constitutional Duty

As John Mitchell, realizing that he was busted, once said to Carl Bernstein:

Nadler, who would preside over impeachment proceedings in the House, also expressed frustration with Attorney General William P. Barr during the interview with CNBC, at one point calling him “just a liar” and alleging that Barr mischaracterized the special counsel’s findings on coordination between Russia and Trump’s campaign during the 2016 election.

Nadler, whose committee is planning hearings with special counsel Robert S. Mueller III and key witnesses in his investigation, was asked by CNBC’s John Harwood about the timing of any potential impeachment proceedings that might follow. Some Democrats have argued that Trump obstructed Mueller’s probe and should be held accountable.

“It depends on what comes out,” Nadler said. “It depends where the American people are, whether they want to go that way or not. I don’t want to make it sound as if we’re heading for impeachment. Probably we’re not.” After Harwood noted that he’s heard from other House Democrats who think impeachment proceedings will be launched eventually, Nadler said: “Maybe. It’s hard. I don’t know.”

Will the Democrats ever learn a) how to message and b) that the press, no matter what conservatives say, is not their friend? 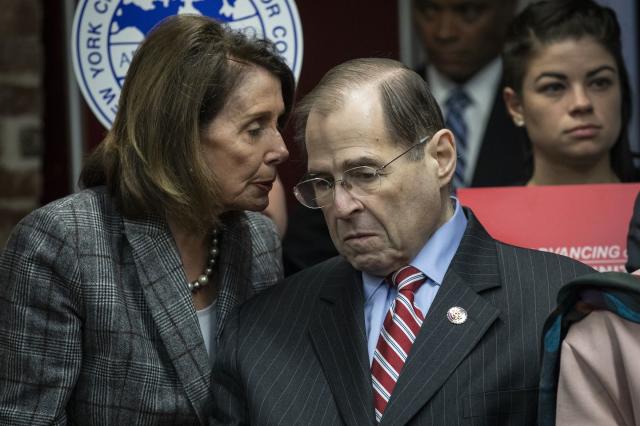 Right now, the Republicans are moving implacably on all fronts to discredit any official account of both how the Russian ratfcking helped the president* win and also to discredit (and stop) any further investigation into how big a crook the Russians helped install in the White House. The chairman of the Senate Judiciary Committee is advising the president*’s son to ignore congressional subpoenas and, just yesterday, in federal court, the president*’s lawyers essentially argued that Congress has no right to investigate the president* over anything. And this is the kind of dithering we get from the guy who chairs the only committee that can bring impeachment charges against a criminal presidency*? To hell with knives and gunfights. This is bringing a pea-shooter to Omaha Beach.

I think Nadler is a decent chairman. I don’t think he has any illusion about the ferocity of the forces arrayed against him. But, dammit, he holds the majority on the House Judiciary Committee and there is power in that. Spectacularly, it gets worse.

Nadler said that in his view, Trump can be impeached for only two things: “misuse of presidential power while president or for cheating in the election that gave him the presidency.” “Other than that, if he did something terrible before he was president, he robbed the bank, that’s not impeachable,” Nadler said. “It’s a crime, but it’s not impeachable.” Nadler also said he considers Trump a “con man” but argued that that is not grounds for impeachment either. “He is thoroughly dishonest. He lies all the time. We know that. None of those are grounds for impeachment,” Nadler said. “They’re grounds for defeating him for reelection.”

So, technically, if the country had elected Whitey Bulger instead of George H.W. Bush in 1988, Whitey’s career as a serial-killing gangster would not have been grounds for impeachment unless he strangled someone in the East Room after having been inaugurated? Also, if the president* did cheat in the election in order to win it, and the House impeached him for it, it would be impeaching him because “he did something terrible before he was president.” Nadler’s argument doesn’t even make sense, and that’s in addition to the fact that he narrowed the grounds on which he might wield his considerable clout unnecessarily and voluntarily.