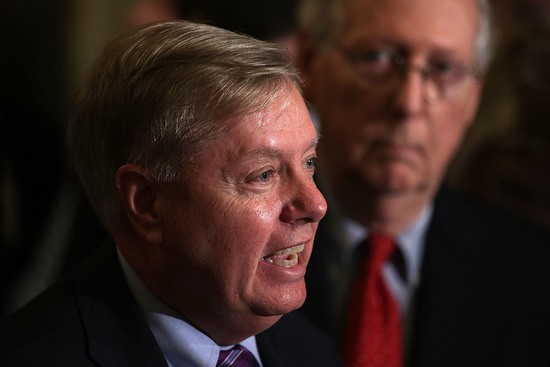 The transcript of Fusion GPS founder Glenn Simpson testifying before the Senate Judiciary Committee released to the public by Dianne Feinstein (D-CA) is both the entire congressional investigation in brief, and a revealing insight into why Republicans have been so anxious to keep this information under lock and key.

Every question asked by Republicans in the meeting—every single question—focused on trying to find information they could use to demean and defame the witness. They wanted to paint Fusion GPS as a “Democratic operation.” They were determined to turn Christopher Steele’s visit to the FBI into a partisan act. They used every moment of their time to find something Fusion had done wrong, or that Steele had done wrong … some way that both the company and the information they had gathered could be dismissed. In a day-long interview that was supposed to further the investigation into connections between the Trump campaign and Russian officials, no Republican expressed the slightest interest in that topic.

Instead, surfacing any information related to Trump’s activities in Russia was left to Democrats. Not that Democrats didn’t spend a good portion of their time tying to illuminate the motives behind Fusion’s actions. They did. Democrats also walked carefully through the information that made Christopher Steele feel that he had to go to the FBI. But they also spent time on the topic that was supposed to be the point of the hearing.

By the end of the transcript, a few things were clear: Even before they hired Christopher Steele, Fusion GPS was well aware of Trump’s numerous connections to crime bosses in Russia and in former Soviet states. Steele was hired, not to generate information, but to fill in the gaps around relationships that were already obvious from the public record and Trump’s own statements.

And almost from the moment he began investigating, Steele came across a flood of confirmation—information that included deliberate efforts on the part of the Russian government to influence the United States election. Information so disturbing that Steele felt it was requisite on him, as a professional with decades of experience in intelligence, to take what he had learned to American authorities and inform them of a grave and growing danger. When he did, Steele was relieved to find that the FBI was already on the topic and taking it seriously, thanks to information that originated inside Trump’s campaign.

Most of all, the transcript revealed just why Senator Chuck Grassley (R-IA) was so determined to keep it hidden. Because the clear words on the page made it obvious that the criminal charges leveled at Steele by Grassley and Senator Lindsey Graham (R-SC) went beyond political showboating and into the realm of egregious obstruction. The transcript makes it dead clear that Republicans have no interest in finding the truth, or in protecting the nation.

The transcripts revealed the reasons that Republicans have been so determined to dismiss the “Steele dossier” and the other information put together by Fusion GPS. They did so because the information collected by Fusion confirmed what investigations at the Financial Times made public months ago—Donald Trump was deeply involved with Russian mobsters, who were largely responsible for his finances. In fact, much of Trump’s claimed wealth was simply inexplicable, apparently unmoored from any legitimate source. Donald Trump, successful real estate tycoon, was a fiction.

Steele’s network of contacts and years of relationship-building, along with his entry into Russia at a point where the connection between Trump and this international criminal underground had not yet become a topic of general discussion, allowed him to gather a great deal of information quickly. That information made it clear that the Russian government was determined to assist Trump, if for no other reason than to harm Hillary Clinton. It also became clear from the outset that Trump’s activities in Russia had opened him to potential blackmail, putting an American presidential candidate under the thumb of Russian operatives both fiscally and personally.

Christopher Steele and the partners at Fusion GPS weren’t cackling together over vague, salacious rumors and spinning out tales of Trump’s wild nights in Moscow. They were confronted by a mountain of evidence that showed Trump was both financially dependent on, and personally compromised by, Russian oligarchs with connections both to criminal families—and to the corrupt Russian government.

What we learned from the release of the transcripts only confirmed what we’ve seen in public hearings: Republicans are doing everything they can to protect Trump, even if that means attacking people who only did their best to uncover the truth. Republicans are even willing to press criminal charges against a man who put himself at personal risk and brought what he had learned to the attention of the FBI because what he found was such a threat to America, and possibly to the world.

What the transcripts reveal is that, in investigating connections between Donald Trump and corrupt governments overseas, Fusion GPS demonstrated that the government right here in the United States is equally corrupt. Equally willing to trade truth for power. Equally ready to condemn those whose only crime is uncovering information which those in charge want thoroughly buried.

The information collected by Fusion GPS is an indictment of Donald Trump as a front man for mobsters and corrupt governments whose crooked dealing and personal excesses left him open to easy manipulation.

But the Fusion GPS transcripts are an indictment of the Republican Party, as an entity that has lost any concern for the nation, fairness, or the facts—an entity addicted to power by any means, and willing to use that power to close the mouths of those they view as threats.