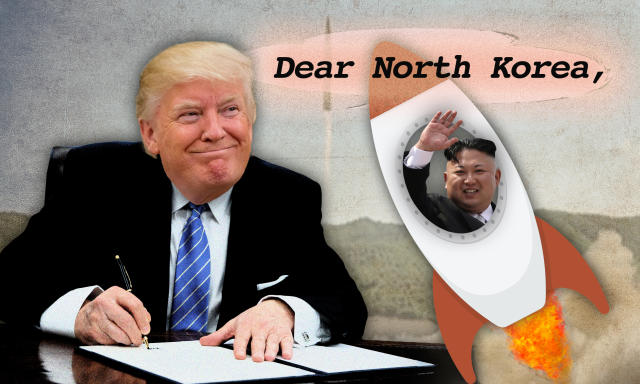 FROM THE WHITE HOUSE
Washington, D.C.

To the Honorable Kim Jong Un

I hope you’ll treat this letter as personal and confidential, from one large-handed leader to another. I got the idea to write it from my generals, who were telling me all about this big showdown over Cuban missiles back in the 1960s, which apparently really happened.

I figured, hey, if John Kennedy can negotiate over missiles directly with a dictator — and he was a very low-quality person, let me tell you — then so can Trump.

You can’t leave diplomacy to a loser like Tillerson, believe me. But I’m trying not to think about him right now.

It’s very important that you and I talk, very important. Because like I said during one of those debates we had during the campaign, which were a total waste of time, although people said I won them all and frankly that I was the greatest debater ever, and that’s a direct quote from somebody somewhere, but anyway, what I said during a debate was, “I think, for me, nuclear is just the power, the devastation is very important to me.”

I can’t say it any clearer than that.

First off, let me just point out that our great peoples have a long history together, and all of Korea is frankly very special to us — very, very special. I mean, you gave us the TV show “M*A*S*H,” which had a tremendous run.

Also, without the Korean people, we wouldn’t have all those unbelievable grocery stores in Manhattan. Seriously, I have so much love for the people, so much love. I told my guys at ICE, leave the Koreans alone, because a lot of actual Americans depend on them for kimchi. Great respect, believe me.

You and I have plenty in common, we really do. I know they said that calling you “Little Rocket Man” was a terrible insult, but you can’t believe anything you read in the failing New York Times or lying CNN or the rest of the fake news media. These are the same people who said that I could never win the primaries, and that Hillary was going to be the president, and that Puerto Rico was part of the United States.

The truth is that “Rocket Man” is a very popular song here in America — very much loved, believe me. It’s about a guy who goes into space and finds out that Mars isn’t a very good place to raise a kid, because it’s cold as hell, and there’s no one there to raise them if you did. Which frankly makes no sense, even in English, but it was the ’70s.

The point is, we’re a lot alike. For one thing, we both value family, am I right? I saw you just promoted your sister to a powerful job in the Politburo — very touching, very beautiful. I’m getting ready to turn the White House over to Ivanka in 2020, even though my poll numbers are just unbelievable, better than any president in history, let me tell you.

And while we’re on the subject of family, let me say I admired the way you took out your brother, having strangers run up and poison him in the airport, which was genius. I made a comment about it, and ever since then, every time I go to hug Jared, he jumps back and shields his face. Hysterical.

Let’s see, what else. Both of us have great hair, right? I see that everyone in your country wants to do their hair just like you, which I applaud. I mean, I look at a guy like Tillerson, who’s 65 years old and still parts his hair in the middle, and I think it’s just sad, frankly. But I’m not bothered by him, I’m really not.

We’re both deeply committed to the mining industry. I’m getting rid of these Obama rules, which are very, very harmful to our economy, and you’re giving people jobs for the rest of their lives in labor camps, which is basically the same thing.

We both know how to handle critics. Although I have to rely on tweets for that, because I don’t have the same kind of latitude you enjoy over there, which is something we need to change, let me tell you.

I can’t tell you how many mornings I wake up and think: Wouldn’t it be nice to throw Bob Corker into a pit of starving dogs, or pin him to an antiaircraft battery?

And don’t even get me started on Tillerson. Everyone told me, “Get Tillerson, you’ve got to get Tillerson for State.” And then he calls me a moron. You know who’s a moron? A guy who gives up 25 million bucks a year so he can come running whenever I ring a bell, that’s who.

Let’s just say that if I were to send Tillerson on a diplomatic mission to Pyongyang, and he were to, say, disappear into one of your work camps, I could see how we might end up in a very long standoff before negotiating his freedom. It could take years, a deal like that. But that’s a hypothetical.

Anyway, we’ve got a great thing going here. This business with me tweeting about blowing up your country, and you coming back with “final doom” and all of that. The ratings are off the charts, right? It’s a hell of a show, it really is.

We’ve got the whole world waiting to hear every twist and turn. It’s playing on all the networks at once, which is really something, let me tell you.

But you do know it’s a show, right? Because words are one thing. Words have no consequences, near as I can tell. You can say anything, incite any kind of rage or reaction, and your people just love you more for it. This is what I’ve learned in politics, believe me.

Nuclear war, though — my generals tell me that would be very, very horrible. Millions and millions of people would disappear, and not like on “The Apprentice.” Our ratings would tank. The show would be terrible.

I’m sure we’re on the same page here, but it can’t hurt to double check. So good luck with the public executions, and please pass along my fire and fury to the entire family!

P.S. If you really need to sink Guam, as kind of a season finale, I get it. Just maybe give me a heads-up, so I can see about Tillerson’s travel schedule. But I’m not thinking about him right now. I’m really not.