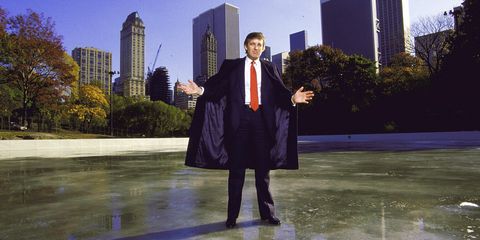 As the President of the United States flails about wildly in response to a new book on his White House, desperately insisting that he has never called his own attorney general “mentally retarded,” there’s somehow a school of thought that there’s nothing much to see here. We already knew Donald Trump was a vindictive know-nothing, the thinking goes. We knew members of his staff work to prevent him from wreaking even more havoc on the world. But in addition to the revelations about how senior staffers literally steal documents off Trump’s desk to stop him from unleashing chaos on a whim, there are further insights into how the president’s brain works.

Surprise, surprise: it doesn’t work all that well. Axios also got its hands on a copy of Bob Woodward’s Fear:

“Several times [chief economic adviser Gary] Cohn just asked the president, ‘Why do you have these views [on trade]?’ ‘I just do,’ Trump replied. ‘I’ve had these views for 30 years.’ ‘That doesn’t mean they’re right,’ Cohn said. ‘I had the view for 15 years I could play professional football. It doesn’t mean I was right.'”

This is a stunning reminder that what constitutes Donald Trump’s knowledge is mostly just fragments of reality he internalized around 1982. They have been fermenting there ever since, continually filtering through his kaleidoscopic reasoning faculties as he dispenses crank observations at cocktail parties, never to be altered or removed because the governing forces of his psyche are almighty stubbornness and delusional ego. The president’s views on trade are his views because they’ve been his views for 30 years. They’re right because they’re his views and always have been. For Christ’s sake, this is trade. No wonder he’s said climate change is a Chinese hoax.

Getty ImagesChip Somodevilla.
This is what happens when you elect a man as president who is completely incurious about the world, who lacks sophisticated critical reasoning skills on issues beyond an ability to avoid consequences for his own behavior, and whose conception of America is so tainted by poisonous nostalgia and his ego-driven need to occupy a certain place in it that he struggles to perceive reality as it is.

Trump to Tom Bossert, the president’s adviser for homeland security, cyber security and counterterrorism, who asked Trump if he had a minute: “I want to watch the Masters. … You and your cyber … are going to get me in a war — with all your cyber shit.”

Jesus Christ almighty, the man thought that once you get elected the job basically involves watching TV coverage about how great you are. Plenty of time for golf, too. And there’s even golf on the teevee!

It’s easy to take a more passive approach when you genuinely don’t care about what happens to people you’re not related to—which is what longtime Trump chronicler Tim O’Brien highlighted in Bloomberg this morning:

Trump – about to be on the receiving end of a potentially damaging book written by a Washington insider with bipartisan, established credentials – is utterly calm on the recording. And he’s calm, despite daily temper tantrums over media coverage, because he generally doesn’t care about the long-term damage he might inflict on himself or those around him as long as he’s the center of attention.

This plays out in larger and more troubling ways as well, according to Woodward’s book, and history may judge most of Trump’s White House team and political party harshly for enabling the president’s radical solipsism. After Trump criticizes the U.S.’s military commitment to South Korea, one White House adviser asks Trump what he would “need in the region to sleep well at night.”

“I wouldn’t need a [expletive] thing,” Trump replies. “And I’d sleep like a baby.”

He knows nothing about anything and cares less. That’s just as true if the thing is a person. It’s even debatable whether he’d bat an eye if the kid who shares his name is thrown in the slammer. Meanwhile, he’s retweeting his chief of staff and Secretary of Defense as they boldly deny ever calling him “unhinged,” an “idiot,” or having the mental sophistication of a “sixth-grader.” It’s all about him, and anything in the world can be contorted, however implausibly, to keep the air in his heaving balloon of an ego. It’s all as it seems, but that doesn’t make it any less horrifying.