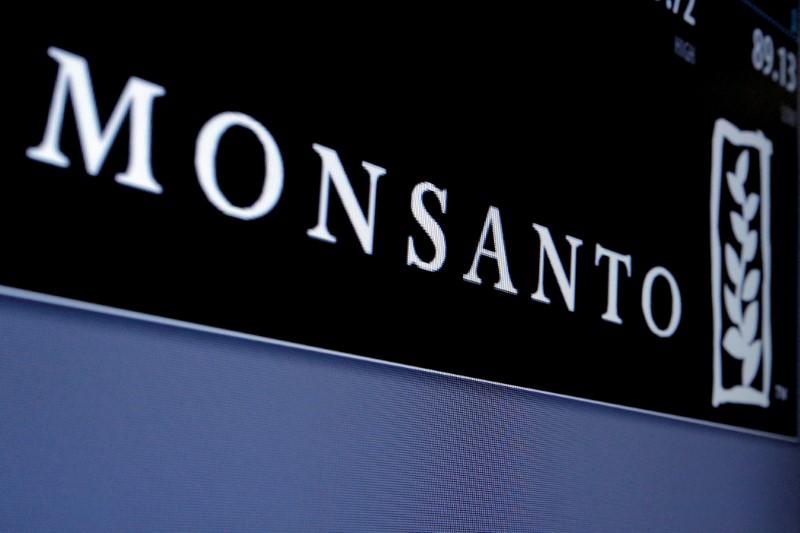 FILE PHOTO: Monsanto logo is displayed on a screen where the stock is traded on the floor of the New York Stock Exchange (NYSE) in New York City, U.S., May 9, 2016. REUTERS/Brendan McDermid/File Photo

CHICAGO (Reuters) – An Arkansas regulatory body voted on Wednesday to bar the use of a weed killer critical to Monsanto Co’s seed sales for a second consecutive summer, ratcheting up a standoff after the company sued the state to prevent restrictions on the product.

The Arkansas State Plant Board plans to prohibit sprayings of products containing a chemical known as dicamba between April 16 and Oct. 31, 2018, after an estimated 3.6 million acres of U.S. crops suffered damage linked to the herbicides this year.

A state legislative subcommittee must approve the ban before it becomes official.

The United States has faced a weed-killer crisis this year caused by new versions of herbicides with dicamba, which farmers and weed experts say harm crops because they evaporate and drift away from where they are applied.

Monsanto and BASF SE, which also manufactures a dicamba-based weed killer, say the products are safe when properly applied.

“These new tools need to be available as choices for these growers,” Scott Partridge, Monsanto’s vice president of global strategy, said by telephone after addressing the board at a meeting in Arkansas.

BASF said the ban would be a step backwards for Arkansas farmers.

The companies’ herbicides are designed to be sprayed during the summer over soybeans and cotton that Monsanto engineered to resist dicamba.

Monsanto’s net sales jumped 8 percent in fiscal year 2017 due partly to increased sales of dicamba-resistant soybean seeds. The company, which is being acquired by Bayer AG for $63.5 billion, also has invested more than $1 billion in a Louisiana dicamba production facility.

Arkansas previously prevented farmers from using Monsanto’s dicamba herbicide in 2017 because the company did not submit studies the state wanted on volatility, or the product’s tendency to evaporate.

On Tuesday, Monsanto provided the board with three binders of data on dicamba, Partridge said, part of a wider attempt to convince U.S. regulators its herbicide is safe.

Monsanto in September questioned the objectivity of two weed experts in Arkansas who said dicamba could drift and last month sued state officials to stop the proposed summertime ban.

Last week, the company asked the plant board to disqualify a member named Terry Fuller from considering the proposal. The board allowed Fuller to participate in Wednesday’s meeting, but he recused himself from voting.