An Oregon Dairyman Reclaims the Pasture 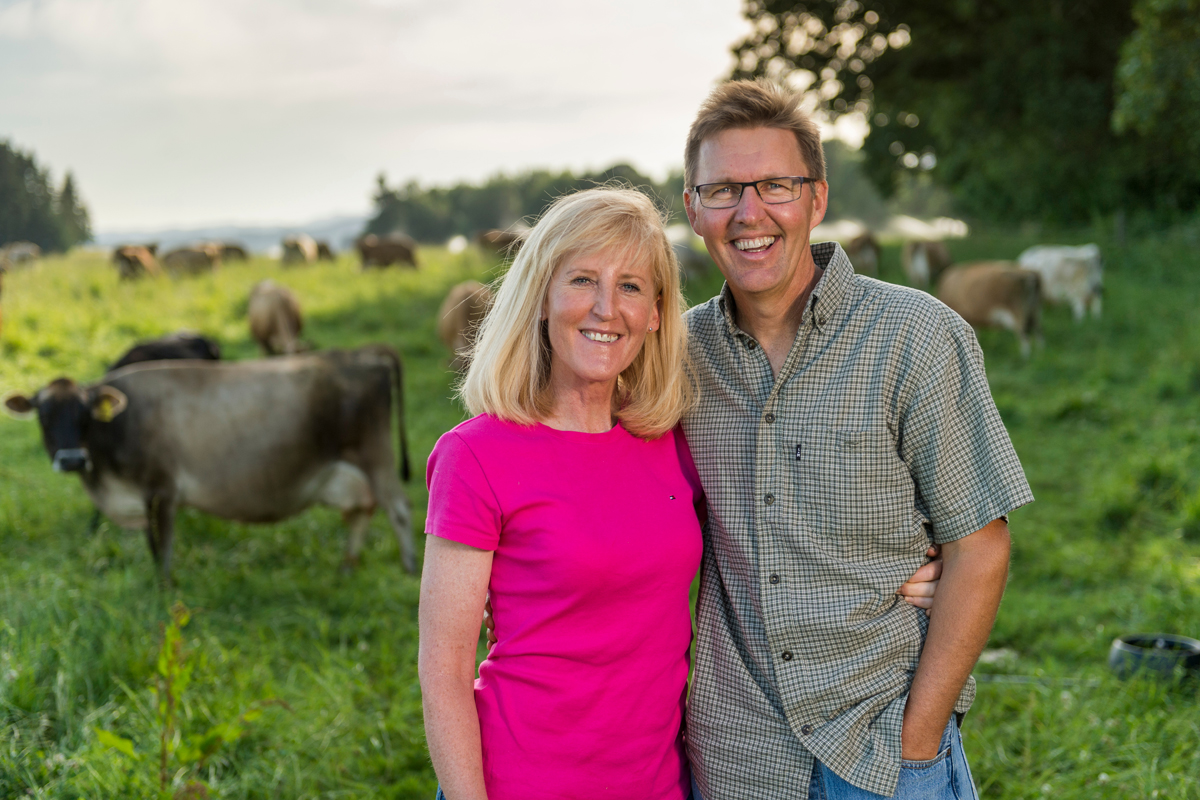 In the U.S., the dairy industry is a tough business for organic and conventional producers alike, with plunging prices and changing consumer demand leading to a spate of farm shutdowns and even farmer suicides. And in Oregon, where dairy is big business—accounting for 10 percent of the state’s agriculture income in 2016—the story is much the same.

But Jon Bansen, who has farmed since 1991 at Double J Jerseys, an organic dairy farm in Monmouth, Oregon, has throughout his career bucked conventional wisdom and demonstrated the promise of his practices. Now he’s convincing others to follow suit.

Bansen and his wife Juli bought their farm in 1991 and named it Double J Jerseys, then earned organic certification in 2000. In 2017, he switched to full-time grass feed for his herd of 200 cows and 150 young female cows, called heifers. He convinced his brother Bob, who owns a dairy in Yamhill, to convert to organic. His brother Pete followed suit soon after. (“He’s a slow learner, that’s all I can say,” Bansen joked.)
He’s someone who prefers to lead by example, which has earned him the respect of a broad range of the region’s farmers and ranchers, as well as its agricultural agencies and nonprofits.

“Jon is an articulate spokesperson for organic dairy in Oregon and beyond,” said Chris Schreiner, executive director of Oregon Tilth, an organic certifying organization. “His passion for organic dairy and pasture-based systems is contagious, and he does a great job of translating complex grazing production systems into common-sense farmer wisdom. His personal experience … is a compelling case for other dairy farmers to consider.”

“He’s just refined and refined and refined his organic methods,” said Siemon, admitting that Bansen is one of his favorite farmers. “He’s transformed his whole farm. It’s a great case when the marketplace is rewarding him for getting better and better at what he does and what he likes to do.”

Dairy farming is baked into Bansen’s DNA, with roots tracing all the way back to his great-grandfather, who emigrated from Denmark in the mid-1800s, settling in a community of Danes in Northern California. He hired out his milking skills to other farmers until he saved enough to buy his own small farm near the bucolic coastal town of Ferndale in Humboldt County.

Bansen was about 10 years old when his father and their family left the home farm to strike out on their own in Oregon’s Willamette Valley. They bought land in the tiny, blink-and-you’ll-miss-it town of Yamhill, about an hour southwest of Portland.

A typical farm kid, Bansen and his seven siblings were all expected to help with the chores. “You fed calves before you went to school, and you came home and dinked around the house eating for awhile until you heard Dad’s voice beller at you that it was time to get back to work,” Bansen recalled. “I was a little envious of kids that lived in town and got to ride their bikes on pavement. That sounded pretty sexy to me.”

After studying biology in college in Nebraska and getting married soon after graduating, Bansen and his wife worked on his dad’s Yamhill farm for five years and then began talking about getting a place of their own. They found property not far away outside the sleepy town of Monmouth. It had the nutritionally rich, green pastures Bansen knew were ideal for dairy cows, fed by the coastal mists that drift over the Coast Range from the nearby Pacific Ocean.

One day, a few years after they’d started Double J Jerseys, a man knocked on their door. He said he was from a small organic dairy co-op in Wisconsin that was looking to expand nationally. He wondered if Double J would be interested in transitioning to organic production, mentioning that the co-op could guarantee a stable price for their milk.

It turned out that the stranger was Siemon, a self-described “long-haired hippie” who’d heard about Bansen through word of mouth. “He was reasonably skeptical,” recalls Siemon. “He wanted to make sure it was a valid market before he committed, because it’s such a big commitment to go all the way with organic dairy.”

For his part, Bansen worried that there wasn’t an established agricultural infrastructure to support the transition, not to mention the maintenance of an organic farm. “I was worried about finding enough organic grain,” he said.

On the other hand, however, the young couple needed the money an organic certification might bring. “We had $30,000 to our name and we were more than half a million dollars in debt” from borrowing to start the farm, Bansen said. 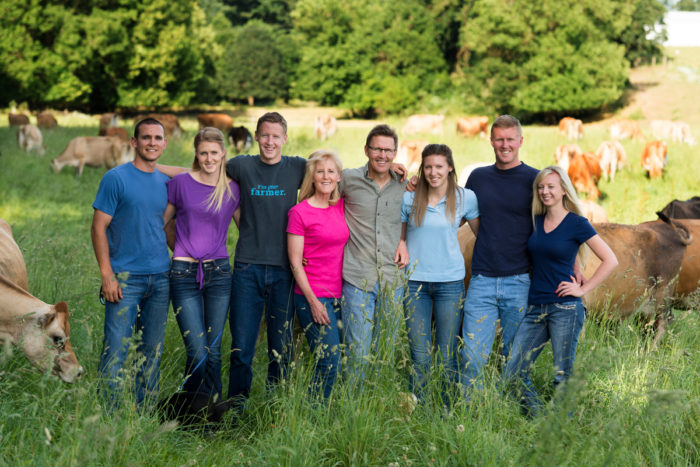 After much research and soul-searching, they decided to accept Siemon’s offer and started the transition process. It helped that his cousin Dan had transitioned one of his farms to organic not long before and that generations of his family before him had run pasture-based dairies.

“My grandfather, he was an organic dairy farmer, he just didn’t know what it was called,” Bansen said. “There were no antibiotics, no hormones, no pesticides. You fed your cows in the fields.”

During the Bansens’ first organic years, they had to figure out ways to eliminate antibiotics, hormones, and pesticides—all of which Bansen views as “crutches” to deal with management issues.

To prevent coccidiosis, a condition baby cows develop when they don’t receive enough milk and are forced to live in overcrowded conditions, for example, Bansen fed his calves plenty of milk and made sure they had enough space.

To prevent cows from contracting mastitis, an infection of the mammary system, he changed the farm’s milking methods.

Another learning curve had to do with figuring out the balance of grain to forage (i.e., edible plants). Originally Bansen fed each of his cows 20 pounds of grain per day, but after switching to organic sources of grain, he was able to reduce that to four or five pounds a day. This switch cut down grain and transportation costs dramatically.

He also had to learn to manage the plants in the fields in order to produce the healthiest grazing material possible. Since the transition to organic, Double J has grown to nearly 600 acres, a combination of pastures for the milking cows, fields for growing the grass and forage he stores for winter, when it’s too cold and wet to keep the animals outdoors.

“It’s not a machine; it’s a constant dance between what you’re planting and growing and the weather patterns and how the cows are reacting to it,” said Bansen. “There’s science involved in it, but it’s more of an art form.”

Transition from Grain to Grass

Bansen’s decision to take his cows off grain completely has meant doing something very different than what the other farmers around him do—even some of those in his own co-op.

His participation in Organic Valley’s grassmilk program is just a progression of what he calls “the organic thing.” He gets paid a little more for his milk, but it’s not the road to riches, in part because his cows don’t produce as much milk as when their feed was supplemented with grain, and he’s had to add more land in order to grow enough to feed them.

Bansen’s motivated by the desire to produce the most nutrient-dense milk possible, and he believes that 100 percent grass-fed milk is where the market is going. 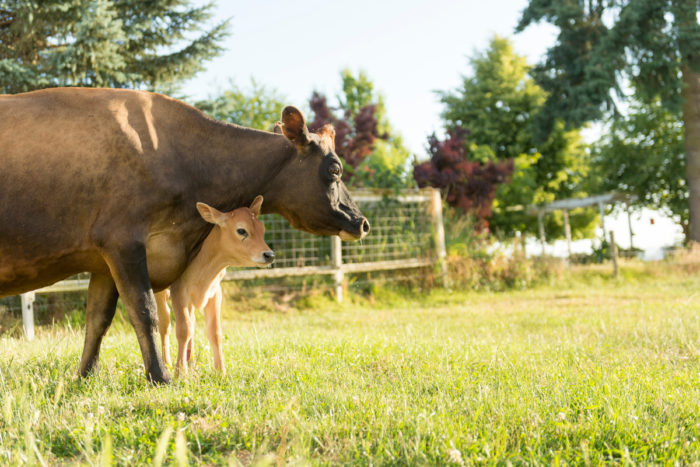 Scientific research seems to bear out his hypothesis. A study titled “Greener Pastures: How grass-fed beef and milk contribute to healthy eating,” published in 2006 by the Union of Concerned Scientists Food and Environment Program, found statistically significant differences in fat content between pasture-raised and conventional products. Specifically, milk from pasture-raised cattle tends to have higher levels of alpha-linolenic acid (ALA)—an omega-3 fatty acid—as well as consistently higher levels of conjugated linoleic acid (CLA), another fatty acid that in animal studies has shown many positive effects on heart disease, cancer, and the immune system.

As our agriculture has moved away from pasture, the balance of omega-3 and omega-6 fatty acids has shifted—leading most of us to consume much more omega-6. Severalstudies have linked that shift to increases in everything from heart disease to cancer to autoimmune diseases.

Bansen’s own test results showed the levels of omega-3 to omega-6 in the milk his cows produce are close to 1:1, far less than the 7:1 ratio found in conventional milk. And that’s on winter forage. He can’t wait to see what the results are once the cows are on pasture this season.

While he’s generally affable, Bansen isn’t shy about disagreeing with the other farmers in the co-op. “When the going gets tough and somebody needs to speak up with some truthfulness, Jon’s never been afraid to speak his mind, and you need that in a co-op,” said Siemon.

In addition to speaking before young farmers in Organic Valley’s “Generation Organic” (or Gen-O) program aimed at farmers under the age of 35, as well as participating in regional farm organizations, Bansen has written articles on grazing and forage for publications like Graze magazine. In an essay in its latest issue, he highlighted the problems he sees in the current organic milk market.

Bansen worries that the integrity of the organic milk market is in jeopardy because of national producers like Aurora Organic Dairy, essentially organically certified factory farms, are flooding the market with milk and reducing prices for smaller operations.

An even bigger problem, from his perspective, is that not enough organic farmers embrace what he terms “the organic lifestyle.” “I’m sick of farmers bitching about the price of milk and going down to Walmart to buy groceries and taking their kids out to McDonald’s,” he said bluntly. “You have no right to bitch about what’s going on in your marketplace if you’re not supporting that same marketplace.”

When Bansen shipped his first milk to Organic Valley in 2000, there were 200 dairies in the co-op. With that number around 2,000 today, he feels it’s more critical than ever that all are pulling in the same direction.

“There’s nothing worse than a farmer who’s on the organic truck saying, ‘I just do it for the money. It’s really no different from other milk,’” he said.

It’s spring in Oregon, probably Bansen’s favorite season, and he’s itching to let his cows out to graze as soon as his pastures have enough forage. When Bansen was growing up, his father used to hold the cows in the barn until milking was done, them release them into the pasture all at once when the season began, which Bansen described as “friggin’ mayhem.”

Preferring a calmer approach with his own cows, he milks six of them at a time and then opens the gate to release them in small groups.

“We’ve kind of taken some of that crazy stuff out of the deal, but it’s still a brilliant day. It’s better than Christmas.” 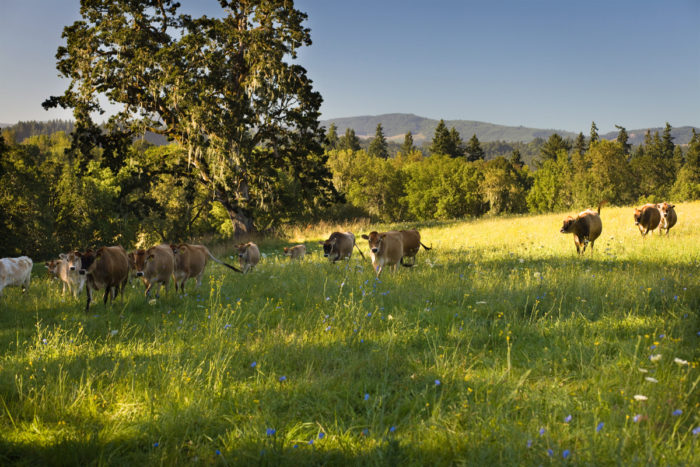